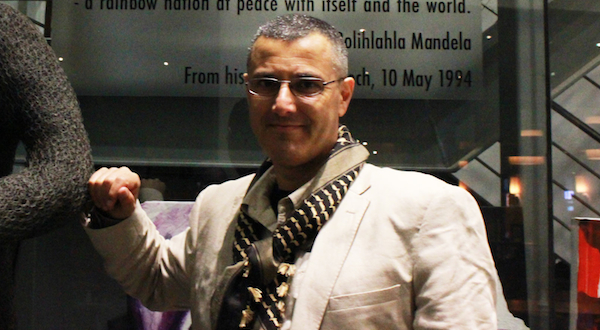 Omar Barghouti is a co-founder of the Palestinian Boycotts, Divestment and Sanctions (BDS) movement. Since 2005, the Palestinian movement has called for an end to what it deems Israeli apartheid. Barghouti has continued to draw parallels between apartheid South Africa and Israelâ€™s regime, citing the South African struggle for democratic freedom as an inspiration behind BDS. TheÂ Palestinian-born activist’s views and the BDS platform have provoked controversy and criticism. RAâ€™EESA PATHER sat down with Barghouti on his first visit to South AfricaÂ and discussed the role of BDS and accusations of anti-Semitism. ClickÂ here for the full interview, including Barghouti’sÂ views on recent events and the increasing violence between Israelis and Palestinians.

Okay, when we say Israelâ€™s regime against the Palestinians amounts to occupation, settler colonialism and apartheid â€“ not just apartheid â€“ weâ€™re not saying Israel and South Africa are identical in their apartheid regime. Apartheid was not just a South African crime, itâ€™s a universal crime identified internationally since 1973 in the International Convention on the Suppression and Punishment of the Crime of Apartheid. Israel does have an apartheid system because it has more than 50 laws that discriminate against its â€œnon-Jewish citizensâ€: the indigenous Palestinians [both] Christians and Muslims. So Israelâ€™s discrimination is not just by policy, itâ€™s by law. Thatâ€™s what makes Israel an apartheid state on top of the occupation and settler colonial state.

South African apartheid and Israeli apartheid belong to the same family of apartheid as defined in international law. The reason why we connect very strongly with the struggle in South Africa, why we are so inspired by the struggle against apartheid in South Africa, is because itâ€™s a very clear model in modern history where the oppressed managed to succeed in dismantling a very, very powerful, almost invincible structure of oppression, which is the apartheid regime. The Israeli army is very powerful, one of the most powerful armies in the world, armed with nuclear weapons, and of course we cannot forget that Israel gave South Africa its nuclear weapons as well. Israel was the closest ally to South Africa when the whole world boycotted it, and this is an important message thatâ€™s lost on many young people in this country; they forget the history of Israeli support for the apartheid regime.

Iâ€™d rather not comment on Chomsky out of respect for his history, but Iâ€™ll respond to the argument in general. Such dogmatic arguments are very baffling for us. Sanctions are not used only against apartheid; sanctions were used against human rights violators around the world. Second, the argument that unlike the struggle against apartheid in South Africa, the BDS movement is not yet as mainstream flies in the face of reality.

Yes, weâ€™re not there yet, but we got Bill Gates to divest from G4S, a company involved in Israeli occupation. We got our partners in the Presbyterian Church to divest; we got the Methodist Church â€“ the largest Protestant church â€“ to divest.Â  We got the largest pension fund in the world â€“ the Norwegian pension fund â€“ to divest. So, saying that itâ€™s not yet there is accurate. Saying it cannot get there, close to the South African level, is just purely dogmatic and itâ€™s a failure to understand reality, and, more importantly, how you move reality. If you look at the anti-apartheid movement in the United States, late 70s/early 80s, it looked hopeless, absolutely hopeless. Nothing was happening, we were not winning anything, but people forget that the boycott was called for by South Africans in the 1950s. Everyone forgets that, people like to remember the late 80s when divestment became popular in the United States, the United Kingdom, France, and everywhere. But for thirty years, very little was being achieved. But human rights activists did not give up, struggling and struggling until it became mainstream. In comparison, the BDS movement is merely 9-years-old, weâ€™re certainly going much, much faster than South Africa. In 9 years, the South African boycott achieved almost nothing, weâ€™ve achieved a lot in 9 years. Weâ€™re on the map, weâ€™re on the mainstream map in the United States, across Europe, in South Africa, in India, in Brazil and elsewhere.

Â There are many points to answer that. BDS is a human rights movement that believes in equal rights for all humans, irrespective of identity. Being anchored in the Universal Declaration of Human Rights, we reject all forms of racism. Islamaphobia, anti-black racism, and anti-Semitism. We absolutely, categorically reject anti-Semitism. We will not accept anti-Semites in our ranks, we will never accept any anti-Semitic language, even hints of anti-Semitic language or actions within our platform. In the 9 years of BDS, the Israeli government, the Israel lobby and the Israeli-run media could not find one iota of proof of anti-Semitism. Theyâ€™re using this to shut down the debate, because our boycott against Israel has absolutely nothing to do with the identity â€“ whether Jewish or other identity. It has everything to do with Israel being an oppressive, colonial, and apartheid regime. We couldnâ€™t care less if Israel were Islamic, Jewish, Christian, Hindu or Atheist. It matters very little to the oppressed the identity of the oppressor. You donâ€™t care if somebodyâ€™s stepping on your neck, whether heâ€™s white, Christian, Muslim, Jew or not. All you care about is his foot is on your neck, and you want to remove that foot off your neck. Thatâ€™s all that we care about.

Second, saying that a boycott of Israel is anti- Semitic is an anti-Semitic statement itself. It assumes that Israel and the Jews are one and the same. If youâ€™re boycotting Israel, youâ€™re boycotting the Jews. That would be an anti-Semitic, because reducing all Jews to Israel and saying Israel and the Jews are equivalent, is saying that all Jews are monolithic sum that have no human diversity. Anyone who puts all Jews in one basket is an anti-Semite. And, of course, there are many Jewish figures around the world â€“ cultural figures, artists, philosophers, writers, film-makers â€“ who have come out in support of BDS.

There was a BDS rally at Wits University in Johannesburg where people began shouting the slogan â€œShoot the Jewsâ€. You can understand why that may rouse an idea that BDS may be anti-Semitic.

That had nothing to do with the BDS movement. We learned about that, it was a couple of activists unaffiliated with the BDS group in South Africa, and of course you can never prevent everyone from saying what they want. The main point, is that we condemn such utterances, we do not tolerate any anti-Semitic utterances at a BDS event anywhere in the world. So, our position is very clear, you cannot control masses if you have mass demonstration and somebody comes up with a very radical slogan, or even a racist slogan, that does not fit within the platform of a human rightâ€™s movement. We come out and say that this does not speak for us, this does not represent us, and we condemn it.

Sanctions in apartheid South Africa came into effect at a certain stage â€“ when international outcry was at its peak. Using the South African analogy, at what stage is the BDS movement at in terms of coming into effect?

Weâ€™re already seeing some form of sanctions, Europeans are not calling them that, but they are if you look at them. European governments in the last number of days, 12 governments â€“ and before that three governments â€“ in Europeâ€™s largest countries have adopted punitive measures against Israeli entities operating in the occupied Palestinian territories. That is the definition of sanctions. Basically, theyâ€™ve advised their corporations and their citizens not to do business with Israeli entities in the occupied territories. True, itâ€™s not obligatory, so itâ€™s not 100 percent sanctions, but itâ€™s in the spirit of sanctions. Thatâ€™s today, 9 years after we started. So, I remind readers and listeners that this is much, much faster than the South African boycott.

There are many realities on the ground that change, no-one knows when the absolute tipping point will be reached, but with four American academic associations adopting full academic boycott of Israel, with Bill Gates divesting from G4S, with major churches, major pension funds, major banks divesting from Israeli companies, weâ€™re getting there.