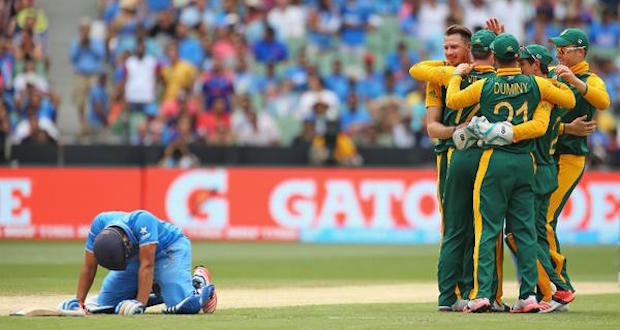 No sooner had our boys lost, did the peanut gallery begin using the dreaded c-word. Not that c-word. The other c-word. Also known as Chuck Palahniukâ€™s less famous novel. Either way, the Proteas didnâ€™t choke. They receded. They were comprehensively thumped by a better outfit on the day. And there is no shame in that. So if anyone tells you the Proteas choked, here are five points to push down their throats.

1. Vernon Philanderâ€™s injury
The Proteas might have conceded 300+ runs against India, but itâ€™s easy to forget that one of our strike bowlers tore a bum muscle (no one seems to know what happened, so letâ€™s go with that) and we were forced to use JP Duminy and whats-his-face Wayne â€œbelowâ€ Parnell for longer than we would have wanted. The last time JP Duminy bowled so early in an innings was in primary school, so you can imagine, it was a tough ask for our boys to contain an India team filled with batters. So yes, we bowled liked biscuits, but we were handicapped.

2. That lad named Parnell
We know how hard Wayne Parnell practices, on Instagram. And look, a lot of the blame will be dumped on Parnell for conceding more runs than a hapless Englishman in a spice shop, but this wasnâ€™t his fault. Parnell should never have been in this team in the first place. In fact, how Parnell continues to makes his way into this team is certainly one of the untold stories of the 21 century; up there with the assassination of JFK, whetherÂ there is intelligent life out there and how Harsha Bhogle continues to find work as a commentator. To his credit, Parnell did bowl a wide donkey drop at Shekhar Dhawan who carved it momentarily into the wide palms of Hashim Amla at deep backward point. But the ball popped out. If Amla had taken the catch, the game may have been slightly different. But it was still a cheap ball.

3. Indiaâ€™s bowling and fielding
For some reason, this usually fearless lad Quinton de Kock appeared a little ruffled by Indiaâ€™s lively pace and accurate length. De Kock’s body language suggested the the Proteas simply didnâ€™t have a game plan going for the chase. They just expected Hashim Amla to set the pace and De Villiers to finish it with the support staff of Miller and Du Plessis, doing their bit. But Indiaâ€™s bowling actually turned up on Sunday. They frustrated Amla by bowling tight outside off stump, and when they bowled straight, they adjusted their length to the rib cage, not allowing him to exercise his wrists and whip it off his pads.

Then there was the fielding from the Indians. Both De VilliersÂ and Miller took on fielders in the deep and were found wanting. Their run-outs were unacceptable, but were they wrong to take on the fielders? Statistics suggest that Indiaâ€™s boundary fielders have a 20% chance of forcing a run-out. Okay, we made that up, but the number is probably even lower. Youâ€™d bet on both Miller and De Villiers to make it home four out of five times.

4. Imran Tahirâ€™s bowling
If one man escaped the drubbing with his reputation intact, even enhanced, it was this one. Long accused of being our weakest link, this man came into his own in this game. But itâ€™s not just Tahir; South African captains have long been accused of not knowing how to use their spinners, for hiding them until they simply had to bring them on. But De Villiers threw him into game before some spectators had even taken their seats. Tahir showed little stress as he floated them, spun them this way and that, and proved to be an immense asset. The Proteas lost the game, but Tahir’s performance was majestic, against, it must be said, the best players of spin in the world.

5. The Duminy delusion
After JP Duminy scored that wonderful century against Zimbabwe in the opening fixture, you kind of figured that he wasnâ€™t likely to do anything useful for the rest of the tournament. Maybe, even for the rest of the year. So when Duminy got out, in some typically silly manner, you knew he didnâ€™t choke, he was just being himself: a perennial underachiever. Duminy is in many ways our Achillesâ€™ heel. He is meant to clean up, if AB and Amla fail, or finish it off with clean hitting, or even guide our long tail through the valley. But Duminy is none of that, and his dismissal told us more about the teamâ€™s flawed make up, than anything else.

* Bonus point
If the reasons above are too much for you to explain, donâ€™t be alarmed. You could just remind the infidel that Sundayâ€™s game wasnâ€™t a must-win fixture and so, linguistically, choking simply doesnâ€™t apply. There is a long way to go in this World Cup yet.