Home Explainer Five things that should be in place before we endorse the national...
WhatsApp
Facebook
Twitter
Email
Print 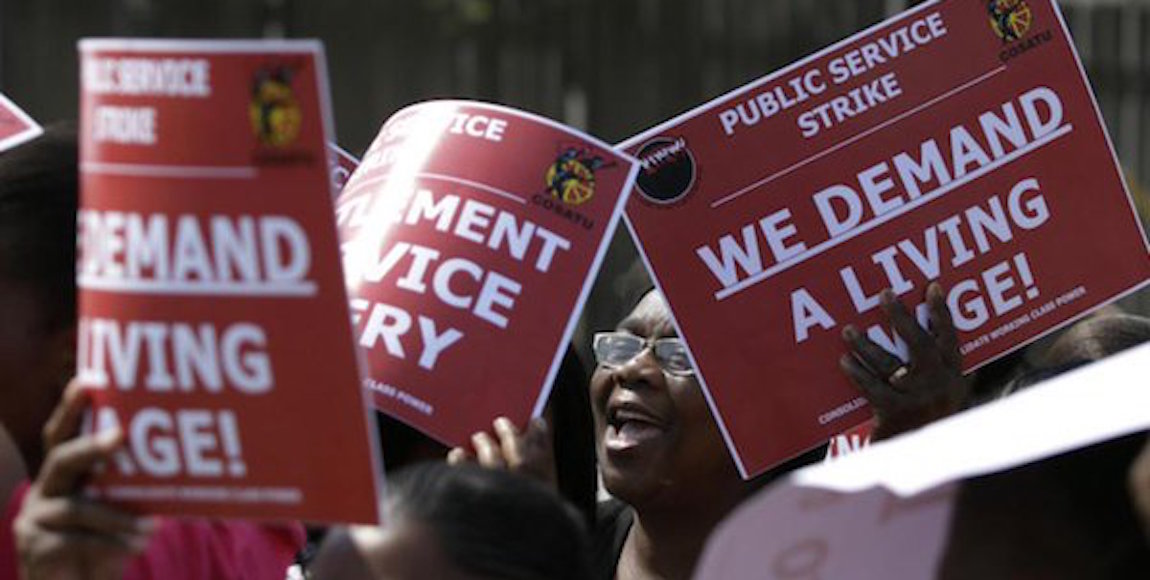 The national minimum wage debate has been hotly contested over the years. On 8 February, after decades of campaigning and negotiation, all but one of the constituents of the National Economic Development Labour Advisory Council (Nedlac) signed an agreement to implement a national minimum wage in South Africa. The signing of this agreement is a groundbreaking development.

But for many, the signing of the agreement is only the start – and the Congress of South African Trade Unions (Cosatu) has not yet signed.

The Daily Vox spoke to Neil Coleman, strategies coordinator for Cosatu and spokesperson for labour in the national minimum wage negotiation, on why the trade union has not yet signed and why the struggle for workersâ€™ dignity is far from over.

Coleman said that the negotiations have been going on for two years.

â€œItâ€™s been a process in which the package [the agreement] has developed over time. The media has, understandably, focused a lot on the R20 per hour figure of R3 500 a month. But there are different elements to the package which are very important ,â€ said Coleman.

While in the short term the national minimum wage is to be set at R20 per hour (R3 500 per month), the concern is that this wage level must be based on the understanding that this amount will be progressively increased in the medium term. The current rate must be seen as merely a starting point.

The National Minimum Wage Commission, an institution that is to be created according to the agreement, will determine what this medium-term target will be. What amount itâ€™s set at gives a clear indication of how serious we are in combating baseline poverty and inequality.

â€œIt would allow for a social engagement to say ‘Look, this is what we need to be aiming towards,â€™ Coleman said.

2. An upfront three-year schedule that takes inflationary increases into account

The National Minimum wage Commission should set upfront annual adjustments of the national minimum wage, scheduled three years in advance. The importance here is that increases to the national minimum wage, taking into account a number of social factors, such as unemployment levels, cost of living, GDP and increases to inflation, should be agreed upon in advance. This predetermined scheduling has been standard procedure with the sectoral wage determinations.

3. Protecting workers from employers decreasing their amount of work hours

Because the national minimum wage is based on the R20 per hour wage rate, the amount of hours someone works per month determines their monthly income. If we take a standard eight-hour working day, five days of work per week and multiply it by 4.33 weeks per month (which is the formula the Basic Conditions of Employment Act uses to determine average monthly wages), then the national minimum wage comes out to just under R3 500 per month working 40 hours per week – R3 900 if you work 45 hours per week.

With this in mind it’s very important that employers donâ€™t cut working hours in order to lower their costs – which effectively means workers would take home less per month. There are existing provisions within sectoral determination legislature which provides for different ways of protecting against this.

4. Someone to enforce and oversee all these things

The institution thatâ€™s being proposed is called the National Minimum Wage Commission. The leadership organisation of Nedlac, the Committee of Principals will decide on the Commissionâ€™s institution functions, scope, full mandate and how the voting works along other things. Itâ€™s important that, according to Coleman, that the National Minimum Wage Commission be as inclusive of communities within decision-making mechanisms and discussion.

One of the proposals to combat South Africaâ€™s startling economic inequality was a that there should be a ratio, in law and the Employment Equity Act, that says that the gaps between the top and bottom 5% canâ€™t be greater than an agreed figure. Coleman indicated that business refused to engage on this at all.

â€œOur whole concept is that we have the working poor in South Africa, and the poor are supported by the lowest paid workers in the country. Therefore we want to raise the level of household income and the national minimum wage is an important aspect of that because it will improve the income of millions of workers,â€ he said.

Along with these, were suggestions of measures to be taken to account for social security, considering the vicious poverty trap of low wages and unemployment in which the poorest in South Africa are currently stuck.

The public outrage surrounding the low R3 500 wage level is justified when one considers the entrenched legacy of inequality that haunts South Africa. There are also no doubt numerous more provisions that need to be included to ensure that the national minimum wage is effective in decreasing poverty among South Africaâ€™s working class.

â€œThe question isnâ€™t about the R20/hour, itâ€™s where weâ€™ll be in a few years time. Can we progressively improve on that figure and can we put in place measures with the national minimum wage to change the way itâ€™s structured?â€ Coleman concluded.