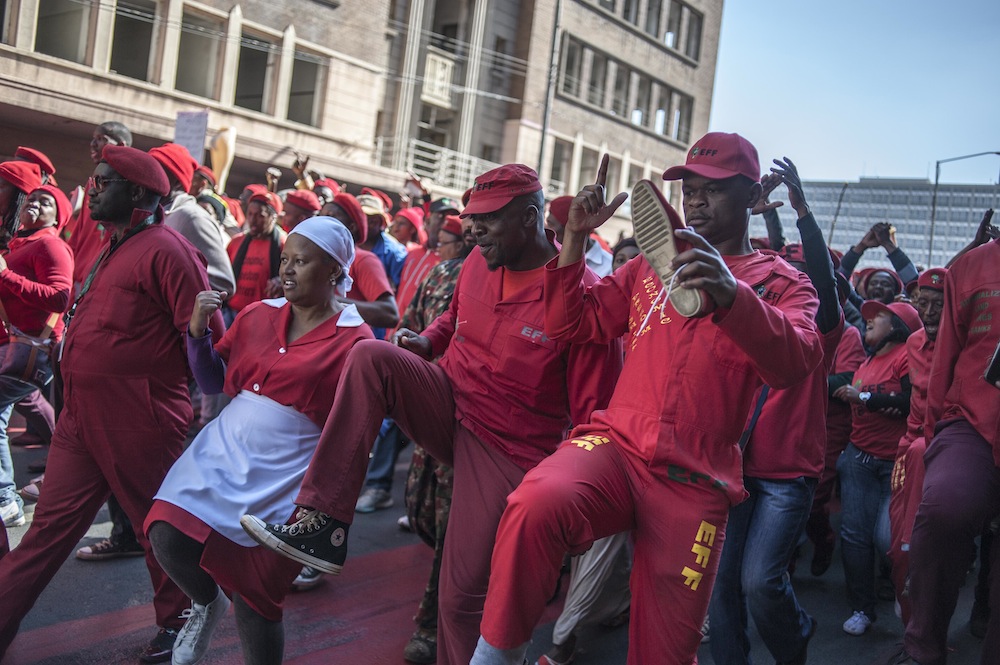 Itâ€™s been a ratherÂ tumultuous year inÂ South African politics. TheÂ EFF, for one, have certainly injected a healthy dose of excitement to the tedium of parliament. And while their interventions have gone some way in ensuring the legislature is not an annex of Luthuli House, some of their antics have also been great entertainment. Â AAISHA DADI PATEL looks at five times the EFF took the cake, and won the internet.

1. Julius Malemaâ€™s speech at the State of the Nation debate

â€œOur people mandated this movement (the EFF) to come and speak on behalf of the homeless, the landless, domestic workers, security guards, farm workers, cleaners, waiters and waitresses, recipients of social grants, construction workers, the unemployed and poverty stricken masses of our people who are forgotten by the ruling elite which are in bed with the oppressors and the imperialist forces,â€ Malema began.

What a debut it was.

2. ASIJIKI
In late June, the EFF broke the rules of the Gauteng legislature when its members wore red overalls branded with the partyâ€™s slogan â€œAsijikiâ€ (â€œDo not go backâ€) instead of dressing â€˜in a manner which accords with the decorum of the house and which does not display party affiliation.â€™ (No, seriously.)

The EFF staged a sit-in in protest and the policeâ€™s tactical response unit was called in to take control. A scuffle broke out and several EFF members were injured. EFF Gauteng leader Mgcina Tshwaku suffered an asthma attack, Benjamin Disolwane broke an arm and Parks Khaiyane was sent to hospital, reportedly in critical condition. Other EFF officials received first aid treatment from paramedics.

3. Storming the Gauteng Legislature
To show that they were displeased about being kicked out of Parliament just because of the way that they were dressed, the EFF broke into the legislature building and vandalised the building. Police fired stun grenades and rubber bullets to disperse the crowd, who resorted to stone-throwing. Eventually the protestors fled, breaking windows, overturning rubbish bins and looting shops, along the way.
You can see pictures from the dayÂ here.

Julius Malema asked on August 2, with reference to the state spending R246-million on President Jacob Zumaâ€™s private home in Nkandla, â€œWhen are you paying the money?Â â€œThe Public Protector has instructed you to pay the money and we want the date of when are you going to pay the money,â€ he said.
Zuma managed to dodge the question expertly, but the EFF were not going to take â€œI have responded appropriately,â€ for an answer.

Mayhem erupted, MPs were cleared from the house, but the EFF remained in their seats, even as riot police were called in. Eventually they were asked to stand down and it was business as usual.

5. Walking out of their own disciplinary hearing
In response to the whole #paybackthemoney fiasco, the EFF had a disciplinary hearing held by the parliamentary-powers -that-be. EFF leader Julius Malema said, â€œThe humiliation the ANC wants to inflict on the EFF knows no bounds,â€ and he and his fellow Fighters marched out of the building.