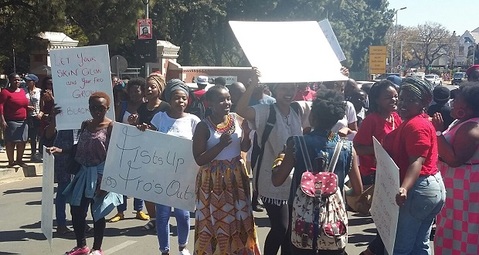 The year of asinavalo has come with nothing short of dololo chill. Black bodies have resisted assimilation and conformity with white traditions in various ways. Here are five examples of how South Africans disrupted whiteness in culture and industry.

1. Relax for who? Coconut oil, thank you

Black hair has always been a contentious topic. In 2016, one would think that institutions and working environments understand human rights and the implications of limiting them for one group of people. Unfortunately, this is not the case. Natural hair is said to be undesirable in schools because it is distracting. Dreadlocks are unacceptable because they are perceived as dirty, only dreadlocks long enough tie into a neat updo are permissible.

#StopRacismAtPretoriaGirls erupted as a form of resistance to this historic policing of black womenâ€™s hair.

You can’t teach nor mark people you are constantly discriminating against fairly. #StopRacismAtPretoriaGirlsHigh

This picture of her gives me goosebumps. She’s claiming her space, body & being. #StopRacismAtPretoriaGirlsHigh pic.twitter.com/bXbvTibiGM

Just a couple of months ago Nontobeko Sibisi, a journalist at eNCA, had her footage removed from a bulletin because she was wearing a doek. Twitter caught fire when users rallied behind Sibisi under the #Respekthedoek. People from all over the country posted pictures of themselves wearing doeks on social media. Her employer is currently reviewing the policy document the governs such decisions in the working environment. This was a form of active resistance against cultural conformity.

The standard of beauty is white and we internalise it so much that we take to doing things to ourselves to alter our complexion. The â€œyellowboneâ€ is a trend that people want to conform to. We have seen South African celebrities slowly turning pale over the years. In August, the University of KwaZulu-Natal, in conjunction with the Department of Health, led a march in Durban to raise awareness against skin bleaching. Smangele Zungu, 23, believes that our society influences us more than we think.

â€œWhen people donâ€™t feel comfortable in their own skin and start bleaching, they want more and thatâ€™s why you find that some end up having skin cancer. Media is not helping either because you find on social media that light-skinned women are trending, which makes us feel as though we are not good enoughâ€ she said.

Nombuso Mtshali, 20, said it is important for black women to represent themselves. â€œWe need to show people that we are proud of being black. Growing up, there were a lot of things being said to me as a dark-skinned young girl but at some stage, I told myself that it was okay. Itâ€™s like if you are not light-skinned in South Africa nowadays you are not taken seriously,â€ she told The Daily Vox.

Malaika Eyoh from Pretoria Girls High described an incident where grade 11 students were in chatting freely in Xhosa, Afrikaans and some in English during a lesson where a staff member had stopped teaching. The staff member singled out the two Xhosa-speaking girls and asked them to â€œstop making those funny noisesâ€ because it made her uncomfortable in their English medium school.

This is not a new; former model C learners recalled their experiences.

We were told we’re too loud, have no manners, we weren’t allowed to speak our own language, its rude #StopRacismAtPretoriaGirlsHigh

Learners who speak their language create a sense of discomfort for those who are unable to understand it.

Traditional wear was only seen on certain days such as Heritage Day and on casual Fridays. As of late, black people wear their cultural dress to disrupt whiteness at formal events. Wandile Ngcaweni wrote about how his graduation invitation required that he wear â€œformalâ€ or â€œsmart traditionalâ€ wear to the ceremony. After wondering about what this meant, he resolved that no oneâ€™s â€œtraditional attireâ€ can ever be deemed â€œunsmartâ€ for any purpose. He said it might be the fault of â€œcolonial sentimentâ€ that would put the word â€œsmartâ€ before traditionâ€. He attended wearing his traditional Zulu skins in April this year.

This was but one example of a student attending their graduation ceremony in cultural dress.

It looks like 2016 has been the year for black South Africans to engage in subtle forms of resistance against white traditional norms. Protests like #StopRacismAtPretoriaGirlsHigh remind us of the greater project that our fellow citizens have embarked in their own capacity. In the words of Marimba Ani, â€œYour culture is your immune systemâ€ – you are left vulnerable and defenceless without it.