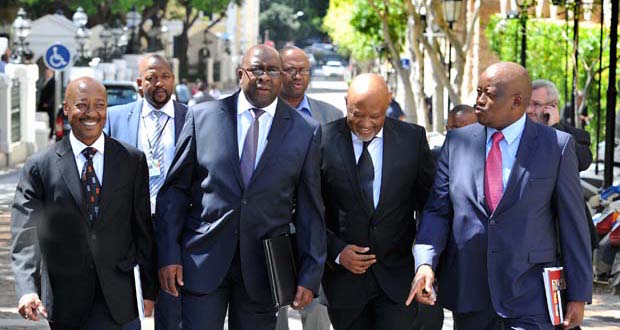 There were no nasty surprises in the budget speech Finance Minister Nhlanhla Nene delivered to Parliament on Wednesday afternoon, but there were some harsh truths. THERESA MALLINSON outlines the tax hikes none of us wanted to hear about.

1. Forking out too much for fuel levies
A collective moan went out across the nation when Nene announced a 30c increase in the fuel levy, which now rises to R2.55. This is a hard one to swallow because the levy is not used to cover expenses related to road use. Instead, itÂ is used by treasury to fund any aspect of government spending.

The Road Accident Fund levy, which is at least used to compensate road-accident victims, will also rise by 50c, up to R1.54.

This means that from April, consumers willÂ payÂ R4.09 in levies for each litre of petrol bought. Thatâ€™s right, more than a third of the money you handing over at the pump will go â€“ directly or indirectly â€“ into state coffers.

The trickle-down effect from the increase in fuel prices means that these levies will be felt by motorists, users of public transport and, as food transport costs are passed on to consumers, anyone buying food.

2. Not forking out enough for social grants
According to Nene, as of December 2014, 16.4 million South Africans benefit from social assistance, which includes old-age pensions and child-support grants.

If these figures donâ€™t mean much to you, take a deep breath and try to imagine raising a child on just over R10 a day â€“ thatâ€™s onlyÂ half of the official measure for the poverty lineÂ ($2 a day).

And all that talk of increasing the age-limit for child-support grants from 18 to 23? There was no mention of itÂ in the budget at all. Nene explained that tax rebates for pension and medical aid â€“ which rise in line with inflation â€“ will actually meanÂ tax relief for people earning less than R450,000 a year; so effectively, only people earning more than this will be paying more tax. For example, if you earn R1.5 million a year, your tax burden will increase by R1,105 a month.

And, if youâ€™re super-rich, you can breathe a sigh of relief â€“ there was no mention made of the much-debated wealth tax.

4. Education: putting out fires
A couple of things caught our eyes in in terms of the education budget. Firstly, Nene stated that the National Student Financial Aid Scheme (NSFAS) is projected to spend R11.9 billion in 2017/18 (up from R9.2 billion in 2014/15). With student-aid-related protests at several universities in January and February, having more money to fund students in needÂ can only be a good thing.Â ButÂ higher education minister Blade Nzimande recently ordered an investigation into the scheme, owing to allegations of fraud and corruption. Â So, the first priority has to be for NSFAS to properly administer the money it already has.

Secondly, Nene mentioned that: â€œAll books delivered to schools from January 2016 will be managed through a centrally negotiated contract.â€ Clearly the government is attempting to stamp out the Limpopo textbook scandal, but weâ€™ll have to wait until next year to see if a centralised approach bears fruit.

5. Eskom and the price of keeping the lights on
Nene proposed that the electricity levy be increased from 3.5c/kWh to 5.5c/kWh, to â€œassist in demand managementâ€™â€™. (He didnâ€™t explain how an increase in the levy would help with demand management butÂ presumably the Department of EnergyÂ will soon enlighten us.)

But the levy itself is small change compared with any electricity price adjustment that Eskom might apply for later this year.Â When Eskom applied for a 16% increase in the electricity price in 2012, it was granted only an 8% increase. But if the energy regulator favours a more â€œcost-reflective tariffâ€ this time round, it could mean a significant jump in the cost of electricity.

So, is there any good news among all the fiscal belt-tightening for government and consumers alike? At least VAT, for now, remains at 14%.

Correction:Â This article originally stated the child-support grant was rising â€œpretty much in line with inflationâ€.Â In fact, the grant is not keeping pace with inflation. The paragraph has been updated to reflect this.Â