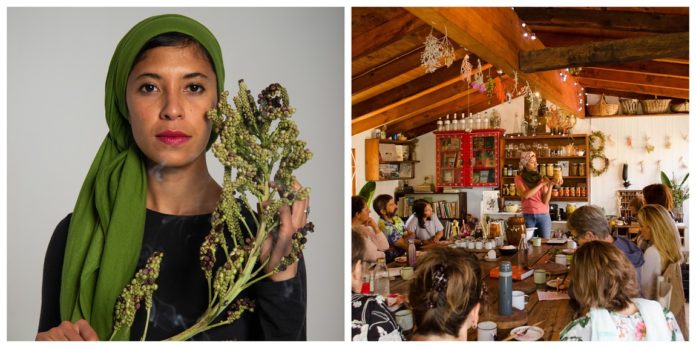 Growing up in Woodstock and District Six, Khan says she felt something was not right in the world. This feeling of injustice marked the beginning of her activism.

She studied journalism – among other subjects – and then dropped out.

While doing a horticulture and landscaping course, Khan grew a rooftop garden “before it was trendy,” she added. That project inspired her to find out more about food production and the difficulties that people are facing around it.

“We have this abundance of food being produced. With the land question in South Africa, large-scale farmers are saying we need the land for agriculture. But on the other hand, more people are going hungry and more food is going to waste,” said Khan.

Khan works closely with the reclamation of indigenous food. “One of the main things the global neoliberal, capitalist model does is all about a copy-paste mentality. We don’t consider the environmental and cultural conditions,” she said.

Khan says in a South African context, speaking about ancient food knowledge means speaking about the people who lived here before colonisation and how they accessed nutritious food.

What we’re now left with, Khan says, is violence and trauma embedded into the land and people. And this often goes overlooked.

“We go on with our lives and working towards our capitalistic goals, and all this dunya goed (worldly things),” she says, code switching. She hosts workshops in an attempt to expose people to new perspectives of food.

During the workshops, she introduces participants to different fermentation methods. Fermentation is something that had been practised in South Africa many years prior to colonisation.

Khan says what makes her happy is when people tell her about workshops they’ve attended which changed their life.  “That’s my role in this dunya (world) is to be able to be a storyteller and to inspire that in other people. That’s the best feeling,” she says.

Along with her fermentation workshops, Khan also introduces children to what she terms “food literacy”. She says that for older generations as children food was more easily accessed. They were able to access and eat the fruits, vegetables, and flowers growing in the community. Khan says in those days smaller children could even go to neighbours if they were hungry.

“The idea of sharing food was easier,” she said. However, in current times because of the violence that exists children do not have as much freedom as before.

Through teaching children, Khan says she can share the idea that not everything needs to be bought and that accessing food can be about creating it.

Khan says she gets told by people that work with indigenous plants that they don’t get involved with politics.

“Saying that you’re not political is a huge disrespect of where the knowledge comes from, especially because you’re capitalising on that knowledge,” she said.

As for everyday people who say that food is apolitical, Khan says that “reeks of privilege” especially considering the condition facing many South Africans who do not have access to food.