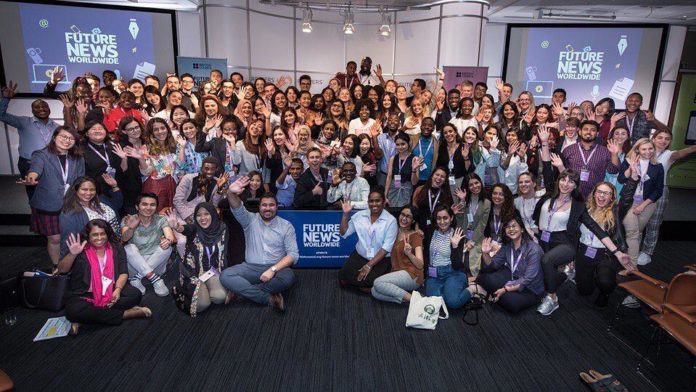 “Journalists are the canary in the mineshaft,” said Sreenivasan Jain, managing editor at New Delhi Television (NDTV). Jain was speaking at Future News Worldwide 2019 (FNW19). He was addressing how journalism can rebuild trust through investigating and exposing falsehoods. The Daily Vox journalist FATIMA MOOSA was one of the delegates. She shares her experiences at the conference.

Future News Worldwide is a two-day conference hosted by the British Council. It brings together 100 young journalists from around the world.

The 2019 edition of the conference took place in Canary Wharf, in the east of London. The conference was hosted at the headquarters of Thomson Reuters, in the middle of the busy business district of Canary Wharf. FNW19 is meant to equip young journalists with skills and advice as they enter the extremely challenging and rewarding field of journalism.

Speakers and advisors from different parts of the field addressed the delegates of the two days. A number of the speakers commended the young people in the room even while addressing the challenges facing journalism. Two major challenges were repeated as facing the field: fake news and the lack of trust in the media.

These are challenges very evident in South Africa and around the world. Fake news is clearly saturating media especially with the way white nationalism and rightwing politics have risen in the US, Europe, and India amongst other countries. With regards to the lack of trust, this is very clearly a problem in South Africa.

From the media being derided for supposedly not reporting on certain issues to the backlash when the media sometimes makes mistake, the public is slowly losing trust with the media. There are no easy solutions to these problems as journalists sometimes to contribute to these challenges.

However, on a positive note, the speakers welcomed the enthusiasm of the young people in the room. They were happy with the fact that there is still so much interest in the field. And while it might be a cliche but looking at the young delegates of the conference, it was clear to see that the future is bright.

All of the speakers and workshops were very helpful. There was Jain’s discussion of the “cow protectors” in India and how he works in a media that is often more interested in telling “power’s version of the truth” instead of speaking truth to power. There was Sonny Swe’s talk at the end of the conference where he spoke about being jailed for trying to produce worthy journalism. Nadine White spoke passionately about never forgetting your purpose for being a journalist. All these talks were inspirational and left a deep impression.

Yet, it was truly the young delegates who were the most inspirational. From 53 countries from all over the world – they were picked from thousands to attend the conference.  It was speaking to them that truly gave hope for the future of journalism. As young people, we are all hoping to forge our own futures. Futures that are not dictated to by those who came before us. Young people are interested to take that guidance but we will find our own paths.

This includes how we see the future of journalism and where journalists fit into that field. Many of the young people at the conference are still starting out in their careers – either at university or in their first jobs. Fighting bureaucracy in the workplace or even more serious threats from outside, they are experiencing it all. Yet, there was a sense of optimism and hope.

Two days might have the shortest amount of time to properly connect with all of the people who attended including the speakers and delegates. However, from questions asked during the discussions to late-night talks to discussions on the train, the passion and enthusiasm were clear to see.

It can be disheartening to be a journalism especially as a young person. For the ordinary person, the news can be a lot. Working in the field day in and day out can take a lot out of a person. Attending the conference felt like receiving some renewed energy to continue the important work.

The public, politicians, organisations and more might not like us. But as all the speakers iterated the work journalists do is very important. Journalists the world over might need to take a look at themselves and engage with the criticism they are receiving.

That does not, however, take away from the crucial role journalists play in speaking truth to power and holding those in power to account. Being a delegate at Future News Worldwide 2019 showed that.

Featured image by Frank Noon via The British Council