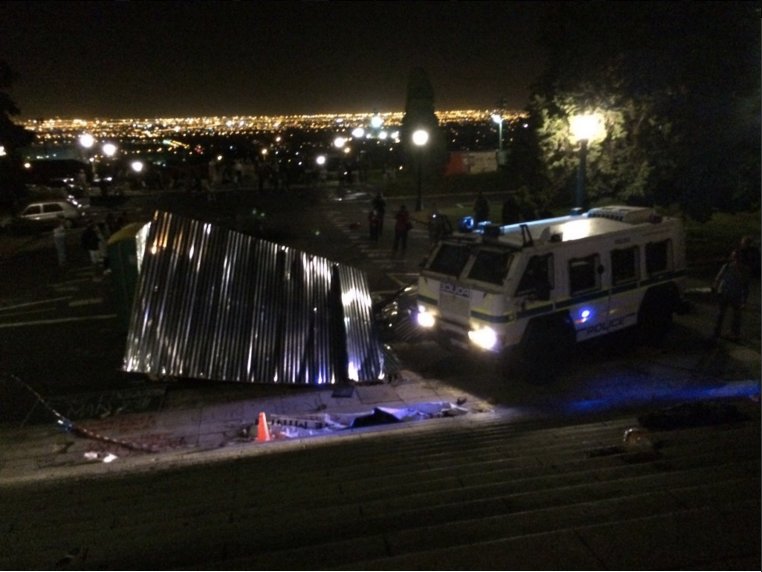 Bail was set at R1, 000 for students who were arrested on Tuesday night at the University of Cape Town when police were called to disperse protesting students. Students were halted by rubber bullets and stun grenades when they demanded the release of those arrested.

JUST IN: bail set at R1000 for seven of the eight #RhodesMustFall student protesters, case postponed until 30 March 2016. SS

Police presence was heavy Â after students stoned one bus and burnt another and a car, in protest against the university destroying studentsâ€™ “shackville“.

Stun grenades fired. A few have been arrested. The Shack has been toppled #Shackville #UCT pic.twitter.com/5OeJBZDkSe

Shackville was a shack erected by students on the universityâ€™s Upper Campus on Monday to highlight the studentsâ€™ housing issues. â€œ[Shackville is] a representation of Black dispossession, of those who have been removed from land and dignity by settler colonialism, forced to live in squalor,â€ said the universityâ€™s Rhodes Must Fall movement.

#Shackville at UCT still standing. No sign of management or private security pic.twitter.com/zSNOyB6Ppr

Students also set flames to paintings believed to be a representation of the colonial era, displayed at the university. The paintings are estimated to cost millions.

These riches were burnt down by students in an attempt to decolonise the institution.

According to students, the university is getting decolonized #Shackville pic.twitter.com/Tbr36zVhGJ

And students insist there is a larger agenda to their protest.Â

1) If you think what happened tonight is just about accommodation & university politics, then you are utterly deluded. #Shacksville

Students re-erected the shack later in the night.