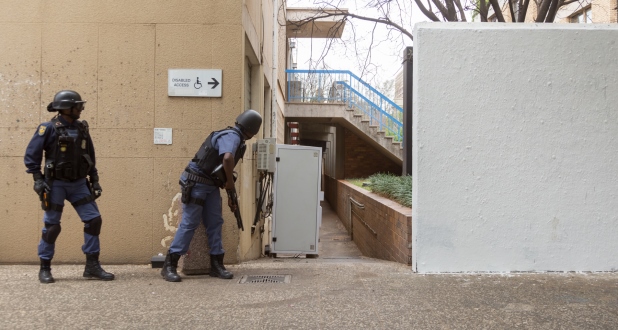 A group of staff and students known as Wits Independent Monitors believe that the decision to open Wits on Monday, 4 October, was miscalculated and risky.

Events at Wits on Tuesday showed that the Universityâ€™s decision to force a reopening of the academic programme under intense policing and private security was miscalculated and dangerous.

This was the finding of a group of staff and students who were concerned about the potential for violence on campus and who formed an informal group to witness and record events during the day. The group was constituted of individuals with diverse political positions, but with a shared concern to avoid injury to all. Around 25 individuals were posted to different regions of campus over the course of the day, along with outside Hillbrow police station.

What we found is the following:

First, in the early hours of the morning, there was no violent provocation from students. During this period a number of students were arrested (and later released) for congregating, and stun grenades were set off to disperse crowds outside the Great Hall. Contract workers who feared to work under these conditions were threatened with arrest by police for gathering elsewhere on campus, adjacent to their station of work, and not wearing uniforms.

During this period, students moved from the Great Hall to the Holy Trinity Catholic Church next to campus, and then to West Campus, occupying several buildings temporarily with no injury or damage to property and then moved to a mass gathering at the Science Stadium. By this time, the student group had grown to several hundred.

They returned at around 11 am, marching up Yale Rd, with the protestors amassed behind academics who had tried to create a protective shield for the students. The crowd was dispersed by police using stun grenades, tear-gas and rubber bullets fired from a distance before the marchers made any contact with them. It must be noted that this was unprovoked and caught all off guard. This event set the tone for the violence that was to follow.

One staff member noted that police used stun grenades indiscriminately, that police officers were armed with shotguns, and that police shot a rubber bullet at the back of retreating students which resulted in a serious neck injury to a female student.

During the course of the day, we witnessed more of this indiscriminate and heavy handed policing, with students and some staff being turned away from the lecture halls to which they were ordered by management to report to; a student being arrested for speaking to police; and students being shot at with rubber bullets and arrested for gathering peacefully. The invocation of an interdict from April 2016 that prohibits mass gatherings was applied sporadically and inconsistently. At times police allowed people to gather and protest, and later without warning used stun grenades, tear gas and rubber bullets to disperse groups, both at those who were stationary as well as those moving peacefully through campus.

Although some students were violent – for instance throwing stones, and in one instance overturning an empty police car (in response to the rubber bullets, tear gas and stun grenades) and damaging some property – in most instances the protest was contained, and peaceful, and many students tried to prevent a small group from resorting to violence. Indeed, the provocation of denying students entry into Solomon House, of preventing crowds from gathering and of indiscriminate arrests and shooting also contributed to violent responses from students. Rubber bullets were fired into groups, even when nobody in a given area was acting provocatively or throwing stones.

In the campus health clinic, where nurses on duty had not been prepared at all for the possible events of the day, we witnessed at least two dozen students with rubber bullet wounds, stun grenade wounds and respiratory complications from exposure to tear gas. We witnessed at least four students being taken to hospital after sustaining serious injuries. We had to rally our own counsellors and psychologists to assist with traumatised students.

Many of us had seen events on campus unfold in #FeesMustFall protest of 2015 and were struck by the escalation in the visible presence of police, private security personnel and the introduction and extensive use of various weapons on campus this year which was missing then. This intense securitised climate has not made our campus safer, nor has it facilitated a return to the academic programme, or a conducive learning environment. Moreover, we believe that a heavy security presence can escalate tense relations within a fractured and fragile university, as we saw yesterday.

Indeed, if Wits management opted to open the university and allowed armed police on campus, it should have created safe zones and medical tents. Even though staff members followed protocol closing their offices and corridors, this left scared non-protesting students with no place to hide as they were locked out of safe spaces such as libraries or offices.

We found many students who were injured and who had difficulty accessing limited medical treatment, and many students and staff who had heeded the university order to return to work and study feeling confused and afraid, and holed into vulnerable pockets by police and protest action. This suggests weak leadership of the University, with management opting to communicate to us via the media or through delayed and often misdirected emails.

The statements from Wits management to staff and students were often not reflective of events unfolding and in some instances misleading. Indeed, in some instances, managementâ€™s orders to resist cancelling the academic programme forced multiple workers to remain on campus under dangerous conditions. We witnessed many workers, including cleaners, administrative staff, and those working in cafes on campus who were ordered not to leave their stations by their direct line managers even while events on campus were violent.

Given the running battles between police and protesters yesterday, we feel that the decision to maintain the academic programme under heavy security was miscalculated and risky. Instead we believe that a mediated process to engage all the factions and stakeholders is needed. This is not likely to be easy but it is the one way to ensure that the University can reopen under safe conditions and that the academic programme can be sustained. From our observations today, we recognise that a very serious breach of trust has been created between university management and many of us who teach and learn at Wits. There will be serious work required to rebuild trust going forward.

While we acknowledge the heavy risks of not completing the academic year, we do not believe that normalised education can continue under these conditions, and a negotiated settlement remains critical. We hope that the final message from Wits management yesterday which opened the door to mediation will begin to repair relations and enable us to consider earnestly how to restore dignity to the Wits community that was violently and unnecessarily stripped from all its members yesterday.