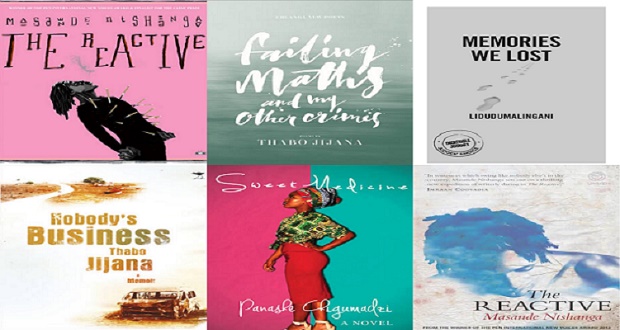 There probably has never been a better time for writers to contribute greatly to African literature than now. Authors cannot write everyoneâ€™s story to being or include everyone in their writing, but these writers give a glance into black lives and perspectives, writes MBALI PHALA.

Panashe Chigumadzi – Sweet Medicine
Panashe Chigumadzi is a wordsmith, carefully sketching the lives of a people caught in the grip of an economic meltdown. She deals beautifully with the complexities surrounding peopleâ€™s lives, caught up as her characters are, in a political and economic maelstrom over which they have little or no control, writes Edward Tsumele for Business Day.

Chigumadzi is a former Ruth First fellow who delivered a memorableÂ address at the annual Ruth First Memorial Lecture on race relations and put the notion of so-called coconuts in the spotlight. Her research,Â Of Coconuts, Consciousness and Cecil John Rhodes, gives insight into the experience of those described as coconuts and will make you look at postcolonial transformation from a different angle.

Her debut novel, Sweet Medicine is a story of a young woman that takes place in Harare at the height of Zimbabweâ€™s economic anguishes in 2008. The young woman, Tsitsi, compromises the values of her religious background to find romantic and economic security through otherworldly means. The bookÂ is a reminiscent attempt at tackling various issues in the postcolonial context: tradition and modernity; feminism and patriarchy; spiritual and political freedoms and responsibilities; poverty and desperation; and wealth and abundance.

Masande Ntsanga – The Reactive
In Masande Ntshanga, one finds an erudite writer of exceptional talent, a critical new voice in the contemporary post-apartheid literary scene. Ntshanga, in his debut offering, joins the tradition of writers such as K Sello Duiker, whose works principally dealt with what it means to be young in a country waking up from an apartheid hangover, desperate to re-imagine itself through its fiction, writes Lwandile Fikeni for Cape Times.

The 30-year-old from East London came to prominence in 2013 when he won the inaugural PEN International New Voices award with his short story, Space. Ntsanga had published several stories prior to the award but it was his book, The Reactive that drew an even larger audience to his work. The novel, set in the early 2000s, is a perceptive and sympathetic portrayal of Lindanathi, an HIV-positive young man dealing with the sudden death of his younger brother, for which he feels unjustifiably responsible. Lindanathi, together with his friends, Cecelia and Ruan, makes a living by working low-paying jobs and selling anti-retroviral drugs in the period before ARVs became largely distributed in South Africa and during the mockery that was AIDS denialism by the Mbeki government. Lindanathi inhabits a space that defines the developing post-apartheid black middle-class youth.

Thabo Jijana – Nobodyâ€™s Business, Failing Maths and My Other Crimes
Having grown up in rural Eastern Cape and later moving to Port Elizabeth where he works as an independent journalist, Thabo Jijanaâ€™s writing is a combination of narrative journalism, social history and cultural criticism.
Jijana offers a mix of small observations of township life with deeper meditations on history, culture and personal angst, pens Charles Cilliers for the City Press. Jijana was recently awarded the Ingrid Jonker Prize for his debut collection of poems, Failing Maths and My Other Crimes.

His memoir, Nobodyâ€™s Business, zooms into his childhood, adolescence and early adult life on a pursuit of truth, self-discovery and closure. Almost a decade after Jijanaâ€™s father was gunned down in a scuffle between rival taxi associations over operations, Thabo approaches one of South Africaâ€™s most violent industries to put the puzzles of his fatherâ€™s murder together.

Lidudumalingani is part of a growing collective of young African writersâ€”which includes the likes of Wana Udobang, Warsan Shire, and Akwaeke Emezi â€“ who are multi-disciplinary in their approach to storytelling. They take the work of chronicling African life beyond the literary sphere, writes Tiwaladeoluwa Adekunle for Brittle Paper.

Mqombothi has published several short stories, non-fiction and criticism, but itâ€™s his short story, Memories We Lost, that has put him on the map. The story maps the journey of two siblings from a rural village, one who looks after the younger one, who suffers from a mental illness. Other themes, such as love and the way in which black communities, particularly villagers speak and deal with mental illness, come into play.

This list is far too short, but with literary festivals such as The Time of the Writer beginning to focus more on African stories told by African writers, we’re excited to see plenty more from these authors, and others, in the near future.