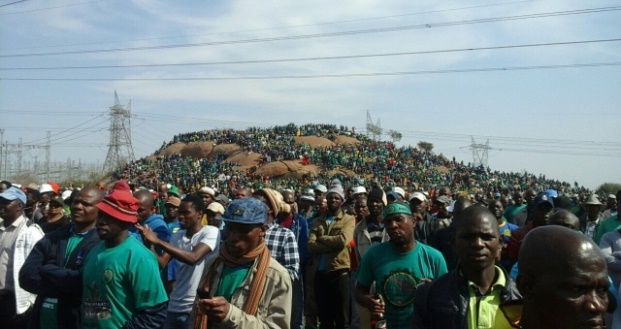 Four years later and there is still no justice for the fallen miners of Marikana. As we remember, tributes have flooded in on social media and news outlets commemorating the day on which 34 lives were lost, few of us actually know the names of those who lost their lives.

Business Day’s Franny Rabkin points out that “when people are gunned down in the US. We can name Michael Brown and Trayvon Martin. But how many of us can name any of those who died in Marikana?”

As she prods us, let us remember them by name.

Hundreds of people gathered in Marikana on Tuesday to commemorate the shooting of the mine workers. And around the country, tributes have been delivered.

We start with Mangosuthu University Of Technology.

Khulekani Shezi, who is part of the Marikana Commemorations held by the Mangosuthu University Of Technology (MUT) outsourced workers, spoke to The Daily Vox about why they are honouring the miners. “The fact that we are commemorating Marikana, we are actually in solidarity with the people that have lost their lives while fighting for their working lives,” he said.

Right2Know has also been commemorating the day by sending some of their own to Marikana.

While at UCT, students are commemorating the fallen miners with a documentary screening, graffiti across the campus and assembly around an installation representing the miners.

Overall, the tributes have been nothing short of touching.

People lost their husbands,brothers,sons, friends and fathers killed by those who are meant to protect us #RememberMarikana #TrendingSA

All they wanted was a decent living wage. Police brutally murdered them. #RememberMarikana pic.twitter.com/BUKaGcs593

Today is a remembrance of one of the darkest days in the new South Africa. We lost lives in the hands of the police #RememberMarikana