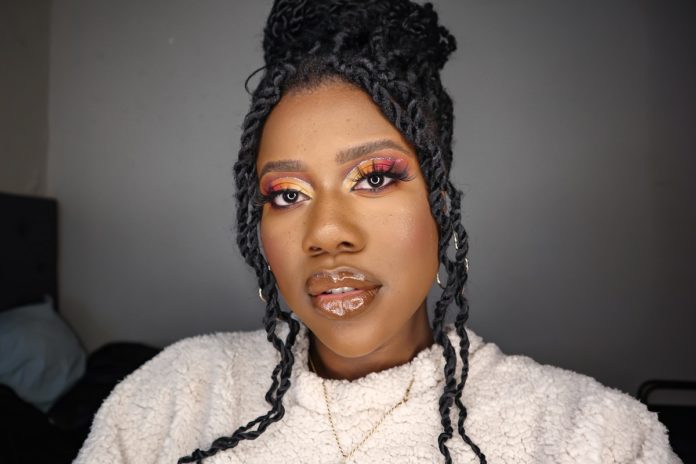 You may have noticed some makeup experiments on your timelines recently. It is all thanks to one person: Foyin Ogunrombi known as foyinog. Through the #7days7faces challenge, social media users were given the opportunity to explore their creativity through makeup. What started as a makeup challenge evolved into an empowering and fun space. Ogunrombi shared her inspiration for the challenge.

Did you anticipate the massive response to the challenge?

The challenge originated back in April at the beginning of lockdown. It was inspired by another influencer Kay Ngonyama who did #21Beats4Kay. I was not in the mental space to do makeup for 21 days. Twenty-one days was a big commitment so I thought let’s do seven. I came up with prompts and made it an interactive challenge. During the first challenge around five or six people joined me. At the end of June when I had got out of my lockdown rut, I did it again and a few more people joined. It started getting a lot more attention on social media. By round three in August, it had kind of blown up because IOL did a feature and I was asked to come onto 5FM. By October, I was absolutely floored by the response. I got lots of brands to support me and sponsor prizes. I’m so humbled by it.

Foyin Ogunrombi is a makeup artist, blogger and influencer. She started fashion blogging in high school.

How did you come up with the prompts?

The one thing I wanted was for people to be a lot more creative and to explore the different sides of makeup. I wanted to find different prompts that would encourage people to explore and play around with the makeup they had and to find different uses for the products they had. We were all doing it together so anyone who would ordinarily be embarrassed or not confident enough would have the perfect opportunity to explore in a safe environment. I tried to combine the super creative prompts with the things that were a little more reasonable and subtle.

During her first year of university she attended a wedding in Nigeria (where she is from originally). After getting her makeup done professionally, she realised she wanted to work with makeup and recapture those feelings of beauty.

What did it mean for you to be able to create a safe space through the challenge?

It was a culmination of everything I had ever wanted. I wanted to build community, especially during lockdown where we are all separated from each other. The digital community is the one thing that we can build on. People have commended me for being so supportive and for engaging with people’s posts. That’s what people needed – we all want to feel validated and accepted. Everyone was engaging with each other and constantly bolstering up the community. It was so great to see everyone actively affirming each other.

What does makeup mean to you?

A lot of people view makeup as simply a patriarchal tool to conform to a certain view of femininity. There is a patriarchal conforming aspect of makeup but that’s not what this challenge was about. The challenge was a catharsis. A lot of people said their mental health took a huge dip during lockdown. This challenge gave them a purpose and something to help with their mental health. It gave them something to feel good. The feel-good nature of makeup is often underplayed. It was transforming yourself into anything out of your imagination. That creative aspect gives you a little control over your life even if it’s for seven days. Makeup is more than just your everyday look. This challenge helped exemplify that there is so much more to makeup.

In 2016, she started a YouTube channel and started with brands. Essence who sponsored the October challenge was one of the first brands she worked with.

Any surprises from the challenge?

I was surprised at the level of commitment that people had. When I saw the things other people were creating with full props and steups, I was amazed at the level of investment. They were investing wholeheartedly in their looks. I was like yall were making props… it got me thinking that I should have pushed myself.

Advice for people wanting to start their makeup journey

Just do it and just go for it! Always remember your why, who you are doing this for and for what purpose. People who have been doing this and are successful are because they’ve been themselves and that’s drawn people to them. You have to think about how to build authentic relationships with people. Don’t spend so much time trying to sound like an influencer that you forget to sound like a person. You need to go and do things for the correct intention.