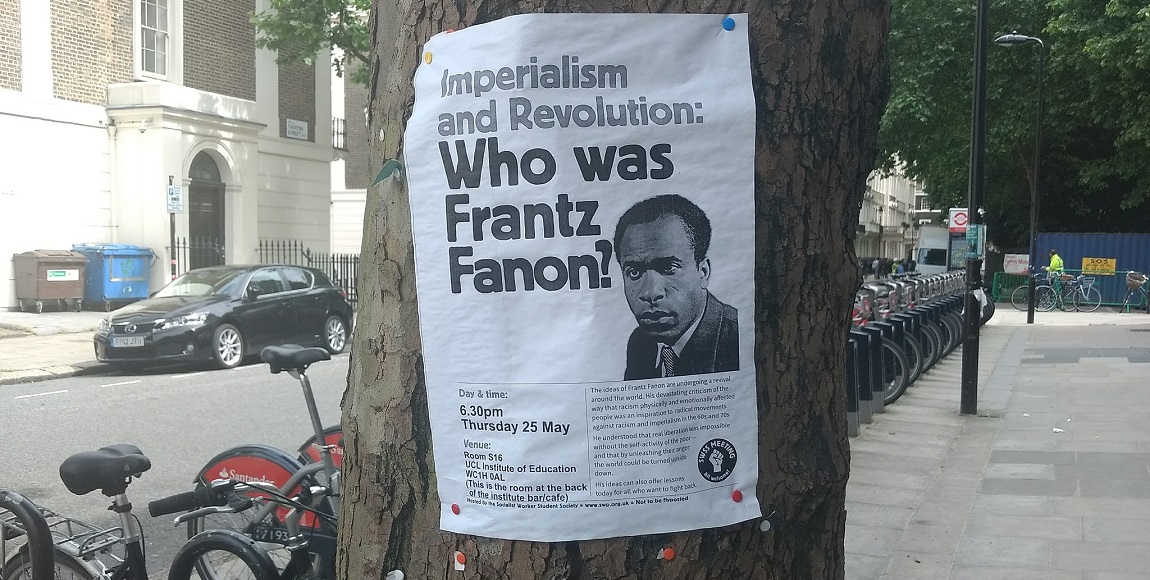 Frantz Omar Fanon, the psychiatrist, revolutionary and father of decolonisation, would be 92 years old. Born on the French colony Martinique, the fifth of eight children to a middle-class family, Fanon created works that continue to inspire and ignite the revolutionary spirit in black activists around the world.

Fanon, joined the French army at 17 and felt disoriented by the racism he experienced during his time there. He later studied psychiatry and eventually joined the Algeria’s National Liberation Front.

Fanon died of cancer in 1961, aged 36. He left behind two works that continue to influence postcolonial studies. In “Black Skins, White Masks”, Fanon analysed the psychology of the relationship between coloniser and colonised. His second work, “The Wretched of the Earth” is a scathing commentary on the colonial condition.

The Daily Vox asked political theorists and activists why Fanon is still revered in activist spaces.

Fanon was influential because of the radical nature of his analysis of racism, colonialism, alienation, and anti-black hate. He was uncompromising in his positions of how to deal with them.

What made his writing radical is the length he was ready to go to transform those situations of injustice and inequity. He believed in particular that violence was necessary to transform existing conditions and that appeals a lot to the younger generation – a least some section of the generation.

Fanon’s position as to how to transform the world was a bit more complex because just as he believes that violence might be a necessary instrument in the transformation process, he was also somebody fully dedicated to the politics of healing. He spent most of his very brief life trying to attend to those who were afflicted by all kinds of mental illnesses, including some of his enemies. When we invoke Fanon, we have to also take into account that healing dimension of his political philosophy.

Increasingly his work is being featured, although he might not necessarily be part of the official curriculum. My wish is for him to not only be invoked but to be properly studied. For this to happen, we will need to radically change the curriculum in our schools and universities, as well as taking seriously the study of the history of African people in Africa and in the diaspora. We are known in South Africa for the disregard with which we treat the history of African people all over the world in our school system.

I don’t like him as much as I used to because I realised that none of them locates black women. He still falls into that category which fetishises [white women] and doesn’t see us as human beings. Their fight for black people is actually a fight for black men. We must also be able to find ourselves in writing and in Fanon I do not find myself as a black woman, as a black girl in the township. I only find myself in the context of blackness and that is not enough. But we love Fanon.

Fanon speaks about violence. Everything must collapse. Decolonisation is a violent process because living in a colonised space is violence in itself. A response to violence isn’t violence. It is fighting for your humanness and we have to start seeing violence in a different way. It’s not violence, it’s justice. It’s reparation. If we liken it to violence then we are not doing justice to the plight of black people because fighting for your humanness can’t be violent when you are trampled upon every single day.

Fanon is clear on the need for us to theorise our reality and thus take action in changing it. Therefore, the fallist movement is moved to take action and Fanon is part of that powerful force behind our collective action as a movement. Fanon is educating us on how to go about on the idea of decolonisation, how to end it both theoretically and practically.

The reason why Fanon has such a great influence in my life is because of his own clarity of thought and a clear aim of purpose. Fanon taught me the importance of theory and practice. In his “The Wretched of the Earth”, he tells us about the importance of diagnosing the challenges that we face as black people in the world and more in Africa. South Africa is part of that troubled world.

Amanda Mavuso, gender and transformation officer of the EFFSC Gauteng

Reading “The Wretched of the Earth” influenced me so much. I stand proudly, being black and conscious. I am able to confront the unjust system of white people as colonialists beyond just politically, but to the extent of mental slavery as well. His analysis on violence tops it. I’m very aware that black violent masculinity has a lot to do with the colonisers, the way they made blacks see violence as a method of retaining superiority and for one to be subversive to the other.

As a gender and transformation officer of the EFFSC Gauteng, I refer to Fanon all the time. I am able to validate the source of the violence in blacks particularly black men. I call myself a revolutionary and Fanon explains it best: to be a revolutionary you must be very conscious. You must be able to strategise and know of all the injustices being done to you. You must never wither or be inconsistent. However, you must carry the mandate and execute it until the full liberation of everyone oppressed.

Fanon pumped blood in my empty shell of blackness. He reminded me that I’m human and not inferior to anyone and that I have to do something about the injustice perpetrated against me and my people. He was the one who motivated to me that fear is an expression of inferiority and that I should overcome it so I can fight for all the oppressed. He was able to tell the hard truth, that blacks are suffering in the hands of whites, and we should fight until we are free.

Fanon was one of the first people to give a proper account of what decolonisation is and what it means. He also recommends solutions and guidelines to achieving a decolonised society. He was also an activist, which means that he understood that theorising alone is not enough but one has to do something in order for the world to change.

The discourse of decolonisation has become very popular and it is trickling down to people who are outside the university space. The removal of colonial symbols, the renaming of university buildings, and changing of curriculums are some of the signs that Fanonian literature is making an impact in society. There is also a growing number of people who are outwardly unapologetic about being black – think about the school child who protested because of her hair.