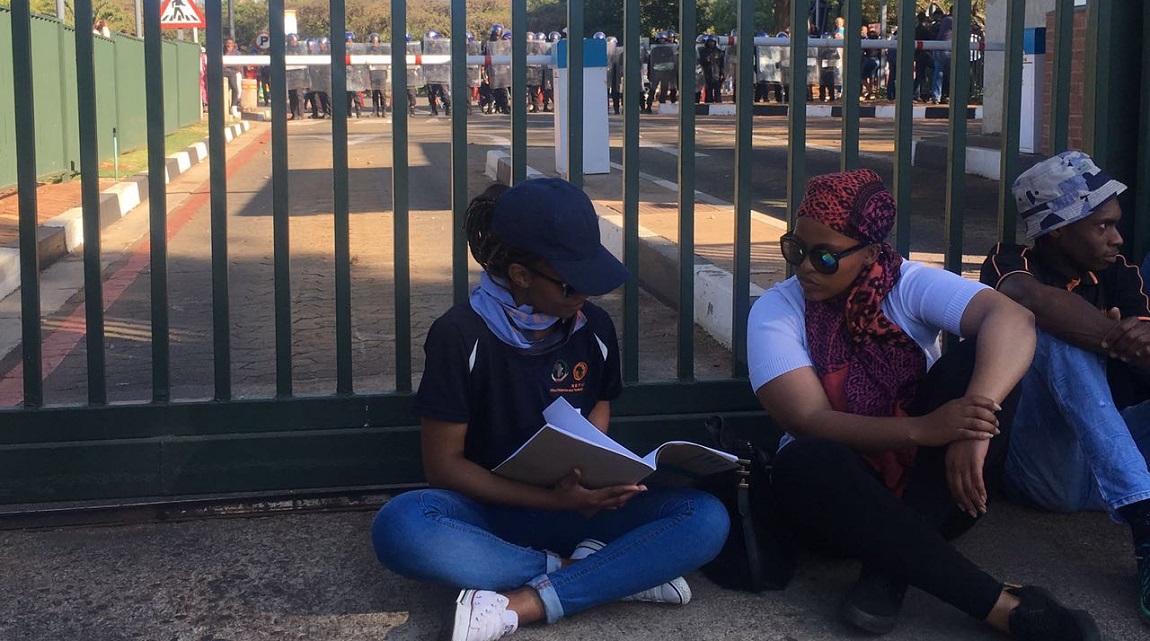 The 2017 university year is beginning in earnest. The spectre of continued #FeesMustFall (#FMF) movement activity, in spite of evident attrition, political party capture, and fracturing within its ranks, looms large. It is worth revisiting some of the key debates that #FeesMustFall and the fallists, in general, have sparked over the last year.

The first is that the #FeesMustFall movement has sparked something new, and worse still, that these protests are leading to something new. This is a misnomer – communities around the country have been protesting for the past 20 years at the rate of an average of 300 or so community protests per year. But the comparison made between #FeesMustFall protests with community protests is odious. Community protests, by and large, engage in claim making that is of generalised societal benefit, one of generalised interest regarding the accessing of rights, or addressing the (mal)functioning of one or other sphere of democratic government. These protests are the product of a serious and continuous engagement with rules, processes and institutions but have been failed by poor institutional oversight and poorer accountability. Studentsâ€™ claims, on the other hand are of a particularist, special interest kind, of benefit directly to them. So nothing could be further from the truth with respect to the claim that the fallists are leading something innovative and new. Though there are distinct continuities with the politics of protest and resistance from the past, there is a breathtakingly dishonest conflation of content and context in the way in which the fallists project themselves.

The claim that higher education as an automatic â€œrightâ€ is a contestable one, even in a semi- market economy, and labelling free higher education as a â€œpublic goodâ€ is amorphous. Supporters of the FMF movement have used ethical validity as the basis for their demands, however, much of the discourse has been essentialist and overly romanticised. In what moral universe is it acceptable for â€œfree higher educationâ€ to be a legitimate ethical demand as opposed to any number of other pressing social needs in a society still in transition and transformation?

In a country where our public healthcare system is cracking under the pressure of an ever-growing patient load, to the extent that patients are literally dying only due to a lack of resources, how do we morally appease ourselves that tertiary education is a â€œrightâ€ that should be funded from the public fiscus? Providing free higher education for all funded from the public fiscus makes free tertiary education regressive, where poorer and middle class people in society end up subsidising the children of the rich. The elite who can afford tertiary education are somewhat absurdly provided a privilege under the guise of a free higher education policy that is meant to service the poor.

Furthermore, quality basic and secondary education has not yet been secured for the majority of children in South Africa. The foundation educational phase, research shows, ensures future success and this is inadequately funded, yet we are being asked to consider free higher education as a tax on the public fiscus? In a low growth, high unemployment environment such as SA, where we already have roughly five million income taxpayers supporting welfare recipients to the order of R15 million, the declining and already overburdened tax base will have to bear the brunt of any increase in subsidy and taxation.

The simple economics of incentives and interest suggests that increasing taxes will likely drive the most educated, highest earning and most able South Africans away from SA and into societies where they can take home a greater percentage of their pay – this is already being seen in Germany which implemented free tertiary education in 2014. Problems also arise from the â€œmoral hazardsâ€ associated with not paying for a service. The argument goes as follows: students are not sensitive to the costs associated with an additional year of higher education and will automatically consume more of it. As it is, the majority of students already take at least four years to complete what is essentially a three-year degree. Progressive politicians may consider more higher education consumed a good thing, but weâ€™re not talking about more students here, but of the same cohort of students simply taking longer to complete. If everyone decided to take an extra year to graduate, because it was free, the burden of higher education on public coffers would increase by 33%. In addition, third-party payments can decrease academic quality. Students, less sensitive to costs, are less likely to hold a university accountable for an education that they arenâ€™t paying for. We can look to the United Statesâ€™ education system as an example: Public K-12 education has been criticised for its declining standards and educational outcomes, while the private K-12 system continues to flourish. To be sure, public education plays an important role to provide educational options to all, but the quality falls when students and parents are not as ardent about rigorous academic standards, due to their insensitivity to the associated costs.

The more important political, or even ethical question to be asked is whether supporting students in higher education is based on a means and merit test? A cursory look at the admission rate of poor and black students, even at the elite universities, illustrates that they are not just open, but deliberately biased towards black and lower quintile income earners with dedicated financial and resource support provided on a sliding scale. Strides are being made in transformation; maybe not tremendous and certainly not at the level of staff demographics but certainly on curriculum content, recognition of prior learning, and even on admissions, where adjusting admission requirements to account for background and disadvantage are accommodated.

Though there are persistent calls for the decolonisation of the curriculum – what is not accounted for are the changes which have occurred in the humanities and social sciences. For example: historiography and anthropology now account for social and oral histories in the construction of narrative. Sociology, economics and politics now cast their gaze on the construction of state, society and market from a developing society perspective, while literature departments focus increasingly on African and post-colonial creation, contrasted and compared with the colonial. In the natural sciences, teaching and research priorities have turned towards the most urgent problems facing developing countries. Fundamental decolonisation of the episteme shaping the construction of knowledge but here too – the universality of knowledge and ideas will be a problem that will need to be confronted and resolved. In any event, its resolution is likely to be found in application rather than epistemology or method.

It is true that socio-economic development in general, and meeting the needs of poor black students in higher education specifically has been ill-served by bad politics and poor policy; inept governance, especially of NSFAS, has produced regression (in the areas where there is regression – primarily in institutional politics, on the economy and in an increasingly myopic public debate). In public governance, much of this is characterised by serious impunity. But the #FMF has been guilty of this too. The attempt of the #FMF movement to be positioned as leaderless and mass led in a sense avoids responsibility and eschews accountability. This is not bravery. It is in fact cowardice. It is to want to make claims and engage in actions but not be identified with it or be held responsible for it, especially in the destruction of commonwealth property – including buildings on campuses that have been symbols of knowledge and education.

So, in all, much of the discourse around free decolonised higher education has been shrouded in the mythology of higher education serving a developmental purpose, when in fact what higher education in a market economy serves to do is enhance the quality of life and class position of its beneficiary. That this has a development impact on society is incidental, even if the altruism is a secondary by-product of a higher education. But this is ultimately dependent on the charitable disposition and goodwill of its recipient.

Of course there are necessary debates to be had about transformation, and it is a moral imperative to examine the affordability of higher education, the housing and general conditions under which students live and learn, but surely this must be done prudently. No one has yet advanced a cogent and defensible argument for why a means tested policy of support is politically and ethically inappropriate. The insourcing of labour with decent job security and adequate social protections (medical aid, pension or provident funds, Unemployment Insurance Fund, savings, fee concessions for university employees) is necessary and moves towards this are in process. Certainly a progressive victory, but who in the absence of fees will pay these good wages linked to decent work? In addition, one wants the BEST lecturers, researchers, tutors, administrators and academics at our universities, but these cost money too.

What the #FMF has unwittingly given credence too, is the excuse for bureaucratic overreach into the institutional autonomy and academic freedom of universities. This is not to argue against universities being held accountable to the societies in which they exist, but it is to argue that the work of the university should continue unhindered from interference from the state or other private donors and sponsors. The incentives for a government increasingly facing a credibility crisis to let an unstable situation at universities persist, is high. The government has allowed this situation persist in order to curb the autonomy and independence of the universities and bring political pressure to bear on them?

The classical conception of the university â€“ autonomous, independent and critical, determining its own teaching and research agenda and funding model, with some support from government and society has been unwittingly undermined by the #FMF movement. The University is a place which cultivates ideas and finds solutions to problems. But at present, the university as we have come to receive it is under assault from both extremities. The â€œright-wingâ€ neo-liberal idea of the university wants to make it only utilitarian, â€œproductive and usefulâ€, cuts costs, reduces overheads, cuts programs, outsources work and charges extremely high fees.

It cultivates the idea of the university as â€œprivateâ€, as cut off from society, apart from society and its concerns. The other extreme – the left – wants a completely overdetermined university, politically correct, existing not to cultivate ideas and solve problems, but respond to the requirements of a vocal minority, rendering them responsive to specific claims and interests, rather than generalised ones accountable to society at large. It will turn universities into beholden institutions, not accountable ones.

Ebrahim Fakir is the director of programmes at the Auwal Socio-Economic Research Institute (www.asri.org.za). Aayesha J Soni is a medical doctor in public practice.

I don’t have exes