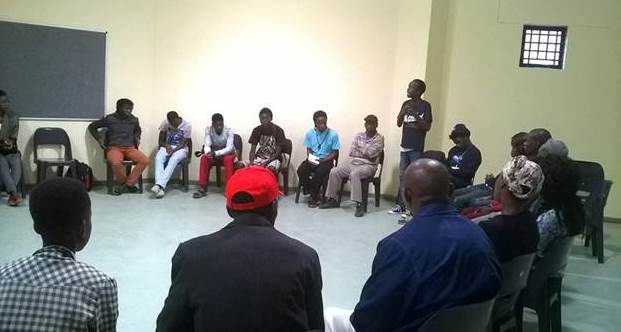 The Free State has some of the finest writers in South Africa, but they have seldom been given anyÂ national acknowledgement or aÂ platform to showcase their work. Now, says MPHUTLANE WA BOFELO, thanks to the efforts of several Free State-born writers and platforms like Free State Writers and the Bloem Poetry Movement, South Africans are startingÂ to take note of the province’s writers and poets

Bloemfontein-based poet and journalist, Magic Khotseng, an exceptional literary activist from the province, recently gave Durban an appetising taste of the literary elegance distilled in the Free State when he recited at two events paying homage to Black Consciousness (BC) thinker and activist, Stephen Bantu Biko.

Khotseng performed atÂ the Remembering Biko: Conversations and Verses event held at Ntuzuma F Library on the 11 September 2015. HeÂ enthralled the lovers of the spoken word and young people, most of whom expressed their connection to Bikoâ€™s ideals and thoughts because of their daily realities and experiences in the township. The event was jointly hoisted by Slam Poetry Operation Team (SPOT), its sister organisation the Nowadays Poets, and Ubuciko Bomlomo Infotainment.

An exponent of Black Consciousness himself, Khotseng eloquently shared the personal and socioeconomic experiences that brought him into the broad Black Consciousness Movement and motivated him to employ literature and community work as mediums of self-healing, community-healing, sociopolitical awareness and development.

As a child, Khotseng witnessed the forceful removalÂ his family from their comfortable home and Batho community, to a three-room house built by the apartheid inÂ Rocklands. As if this was not enough, his migrant labourer father was tricked by a policeman who convinced him to exchange his three-room house for a two-room house in Bochabela, ostensibly because of the latterâ€™s proximity to the city.

This experience and the broad socioeconomic conditions of black people promptedÂ Khotseng to become a student activist, first with the Congress of Azanian Students Organisation and later with the Azanian Students Movement. His activism in the Black Consciousness Movement led him to conferences and campaigns where heÂ was inspired by the performances of Ingoapele Madingoane, Matsemela Manaka and Mafika Gwala.

Khotseng’s experience of growing up without a mother and literally being raised by the community motivated him to work with displaced children -Â so-called street kids – through the Iphahamiseng Community Child Centre. His work with the children resulted in his debut poetry collection, â€œHold Back Your Tearsâ€. His upcoming book, which is earmarked forÂ launch in 2016, â€œThe Son will growâ€, is dedicated to his mother and the community of Mangaung, which taught him that a child is raised by a community.

Khotseng’s story resonated well with the young people from the INK (Inanda, Ntuzuma and Kwamashu) area, which was selected as the nodal point for the governmentâ€™s urban renewal program and has one on the highest levels of poverty and unemployment. But it was when he articulated himself in the language of poetry and music, teaching young people some of the classic freedom songs and reciting sociopolitical poetry that Khotseng had the audience on their feet, calling for more.

The piece that caught the imagination of the audiences was â€œIf wishes were horsesâ€. In this poem, Khotseng eulogised the colorful, exotic and breathtaking natural beauty of mother Africa. He took the audiences on an idyllic tour of the continent where they walked in Maasai Park, enjoyed the serene beauty of the Kenyan landscape, climbed Mount Kilimanjaro and took a dive in the Atlantic Ocean.

He then ruthlessly woke them from their slumber with subtle but poignant allusion to the socioeconomic realities and systemic and structural arrangements that are a barrier to the capacity of the majority of black African people to tour their countries and their continent.

The striking beauty of this poem and the emotive political undertones it carried were manifested when the audience asked for it on the following day, when Khotseng performed his set for the annual Outer National Verses for Biko and Tosh which was held at Ekhaya Arts Centre in KwaMashu.

Khotsengâ€™s Durban recital comes just a few weeks before one of Mangaungâ€™s sons and perhaps one of the most industrious young literary activists and cultural workers in the Free State, Serame â€˜Iceboundâ€™ Makhele will be featured in the prominent Poetry Africa Festival hosted by the the University of KwaZulu-Natalâ€™s Centre for Creative Arts from 12Â toÂ 17 October. Icebound is a founder and convener of the Bloem Poetry Movement, which hosts monthly sessions in collaboration with theÂ Performing Arts Centre of the Free State.

Bloem Poetry has developed the performance skills of many local poets. Icebound was selected to coordinate the Macufe Poetry Festival in 2014 and is currently part of the Free State Cultural Ensemble initiated by the provincial legislature. The ensemble includes dance, music, drumming and poetry, and has performed in this yearâ€™s Africa Day Celebrations and the Free State’s Womenâ€™s Month dialogues. If the poetic magic that Khotseng exhibited at Verses for Biko and Tosh is anything to go by, the Durban audience shouldÂ prepare to be bewitched by the Bloemfontein literary potion when Icebound takes the stage at Poetry Africa.