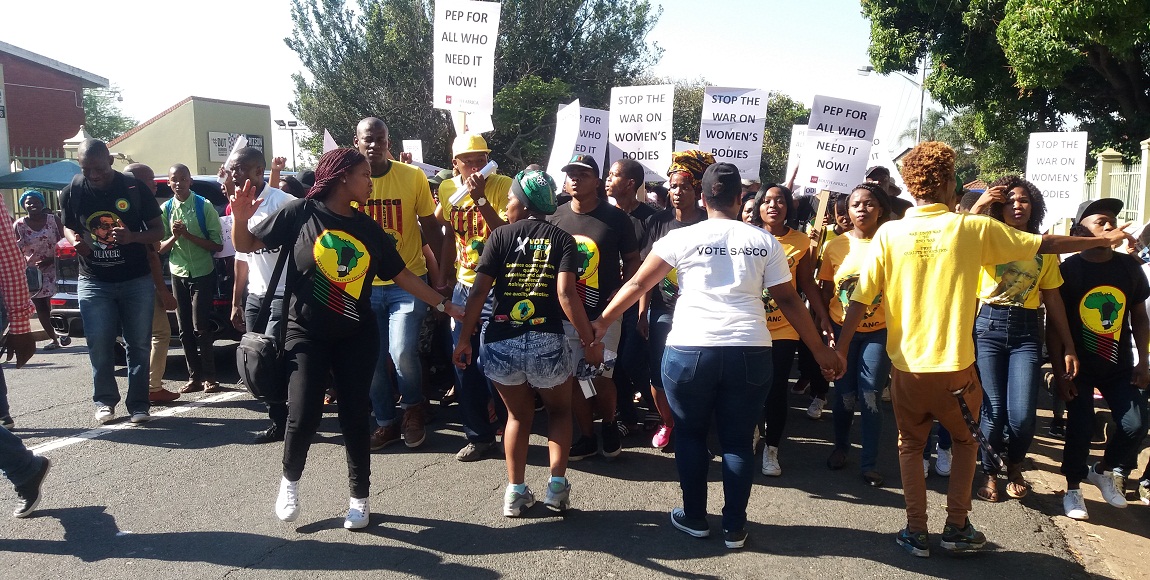 Students at the Durban University of Technology (DUT) say theyâ€™re fed up with feeling under threat from criminals while on campus. On Wednesday, 24 May, the South African Student Congress (Sasco) held a march at DUT against crime against women, especially the alleged abductions of female students. This came after three female students were reportedly abducted from the institution’s premises. Reports of the abductions caused outrage and concern among students. However, local police told the Daily Vox that there were no reported cases of abductions from the university. The Daily Vox asked young women at the march why they felt the need to be there.

Smangele Makhonza, 26, uMlazi
Exams have commenced and we have to spend as much time on campus as we can but it’s impossible since we don’t feel safe. I have friends who have dropped out of university because they felt unsafe and I don’t blame them. The university needs to be aware of what’s going on because it’s only us students who are targeted; the staff is safe yet we feel like the management is protecting them more than us. We are only relying on the MI7 security guards but they don’t even carry guns so they really can’t do anything even if they want to protect us. I have had to buy a pepper spray so that I can protect myself.

Alan Khan, the Director of Corporate Affairs at the Durban University of Technology said in a statement that the institution is engaging with campus security and the SAPS to address studentsâ€™ safety concerns. â€œA team from DUTâ€™s campus security has been assigned to patrol the areas around our campuses,â€ he said. He also urged students to avoid travelling alone or walking in isolated areas.

Amanda Madlala, 22, Durban
As a female student who doesn’t feel safe anymore around campus, I am here to fight for my rights. I have a right to safety and some of the residences don’t have shuttles. We are constantly being told to be vigilant and stay off some roads but those are the same roads that we use when walking to residences. Even our residences are not safe enough because anyone could walk in and out at anytime. We need the university to tighten the security. I am aware that it won’t be easy to catch perpetrators but the police need to intervene and protect us.

Mqondisi Duma, Sasco General Secretary said the student organisation condemns any form of abuse and violence against women. They handed in a memorandum with the list of demands to the police and the management. Sasco has asked for police to step up the patrols on campus surroundings. Nontobeko Mkhwanazi, 21, Durban
Marches like this one are important, especially because as students we need to raise awareness of what’s going on. We normally participate in protests such as Fees Must Fall but we don’t really look around us and take note of what’s currently happening. If students can be abducted from just outside campus and residences, that means we are not safe and we need to unite and mobilise. Sinoxolo Mahlalitshana, 20, Durban
As a female student, I feel as though I have a responsibility to attend such initiatives, especially since the country is faced with a crisis of women being killed. Also, lately I don’t feel safe being around campus and even being at the residence due to all these incidents happening in our university. As students we want the university to ensure that the SAPS is patrolling the whole day so that we could at least feel safe.

Colonel Thembeka Mbhele, SAPS provincial spokesperson said police have not received any reports of people going missing from the institution. The university has urged students and staff to report to the protection services if they feel threatened or witness any suspicious activity. Anelisa Hams, 22, Durban
Women trafficking is real and we need to take marches such as this one very seriously and I feel as though we are neglected as students. With the kind of security measures on campus and our residences, our safety is not guaranteed. The guards don’t even have guns so how can they protect us? They are defenceless themselves. We need SAPS to join hands with the security guards on campuses and help protect us.