If ever I needed a reminder of how much trouble the term â€œfreelancerâ€ can cause in Zimbabwe, Friday was it. President Robert Mugabe was due to address his first youth rally in rural Lupane, since jetting off to Singapore for a health checkup a few weeks ago. Naturally, there was a lot of media interest in seeing the worldâ€™s oldest sitting president take to the podium so I went along, only to get hassled for being a freelancer. Of course Friday was nothing near as intense as other situations Iâ€™ve found myself in, and it hardly compares to the assaults other Zimbabwean reporters have bravely endured, but it was just a stern reminder that, sometimes, identifying yourself as a freelancer for local or foreign media is like waving a red rag to a bull.

Iâ€™d opened my bag for inspection, but on seeing my camera, the female security officer called her superior who bombarded me with loads of questions. Despite showing him a valid press card issued by the Zimbabwe Media Commission, he claimed I wasnâ€™t accredited to cover the event, because freelancers needed to have special clearance letters. Strangely, my colleague had initially made it past the guards and was waiting for me on the other side, but he got into trouble once the security officer discovered he was also a freelancer. The official made us follow him to and fro, across the dusty Somhlolo Stadium and warned us several times against running away.

But even if we wanted to, trying to dodge security at a presidential event wouldâ€™ve been an idiotâ€™s death wish. We were already a moving target.

As far this young security officer was concerned, freelancers were the reason â€œfunnyâ€ pictures of Mugabe went viral. No matter how many times we tried to explain freelancer wasnâ€™t a synonym for anti-Mugabe reporter; this guy wasnâ€™t having it. And heâ€™s not the only one. The definition of a freelance reporter is lost on many government and Zanu PF officials. It simply means a journalist who isnâ€™t employed full-time to work for one organisation, but one who works on a job-to-job basis for different organisations.

After failing to find the security superiorâ€™s superiors we came back to the entry point and waited under a sparsely shaded tree. The long, anxious wait was eased by watching the queues of people, young and old, sober and drunk, go through the routine pat down and bag search. Suddenly, three uniformed air force officers and two intelligence personnel surrounded us. They smiled, as our security official introduced us as, â€˜ma freelancers vanofarisaâ€™ (the freelancers who get too happy).

Casually, the officers asked to see my camera and I stammered in response. My sweaty fingers pulled the trigger and took a dummy test shot. Disable the device, they said, and I held out the battery in my moist palm. The minutes passed like hours. No matter how many encounters one has, every run-in with security always feels the same, but, as I learned, not every officer is the same. My heart wanted to burst out of my chest, but the officers were so relaxed. They even joked with us when we finally walked through.

If everyone could be that calm and efficient, maybe itâ€™d make our job as journalists much easier. But the more party and government security push journalists about, the greater the temptation to file â€˜badâ€™ pictures â€“ not for the storyâ€™s sake or to spite the president, but to spite the system and the culture of silencing all things considered to undermine the authority of the president.

That might even include images of Mugabe with his eyes closed.

Whether heâ€™s sleeping or resting his eyes, surely seeing such â€œfunnyâ€ pictures is nothing odd. My granddadâ€™s 96 and he canâ€™t walk without help, he dozes off and needs power naps to get through the day and he eats at snail pace. If at 93, Mugabe is sometimes said to do similar things, maybe we as a nation need to get over it and stop hounding freelance journalists, because maybe, just maybe, thatâ€™s the no-so-new nonagenarian normal. 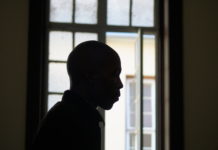