Home Journalism “Future of Media: How can we make journalism better for everyone?” Webinar?
WhatsApp
Facebook
Twitter
Email
Print 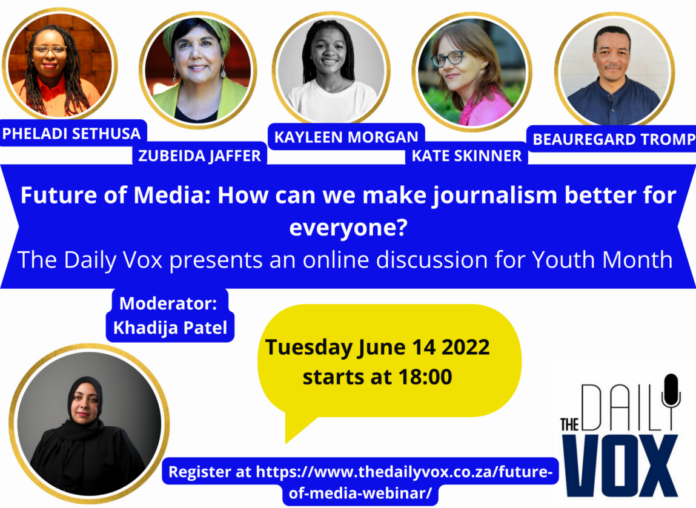 Join The Daily Vox team as they present a webinar on June 14 on the future of media and decolonisation in the media. As part of the Youth Month commemorations as well as The Daily Vox’s anniversary, they have put together an esteemed panel to discuss this important topic.

Moderated by The Daily Vox’s co-founder Khadija Patel, the panel will be looking to consider how the media landscape is viewed by people who work within it as well as how media consumers view it.

Kayleen Morgan is an award winning multimedia journalist at News24, covering some of South Africa’s biggest news stories in real time, with video and images. She has been in the industry for five years, recently gaining recognition for her work in KZN during the recent floods.

Pheladi Sethusa is a lecturer at the Wits Centre for Journalism. Her teaching areas include multimedia news production, ethics and mis/disinformation. She holds a Masters in Digital Documentary from the University of Sussex. She currently tells stories through podcasts and documentary films.

Zubeida Jaffer is an award winning South African journalist, author and activist. She has helped with developing local community newspapers during the time of resistance to apartheid. In March 2021, she and her daughter, Ruschka Jaffer launched Number10Publishers Publishers, a company through which she is further pursuing her commitment to having an independent voice and helping others find their own.

Kate has been a media freedom activist since 1994. She sat on the Freedom of Expression Institute (FXI) Board for a decade and in 2008 she founded the civil society “Save our SABC” campaign. In February 2018 Kate was appointed executive director of the South African National Editors Forum (SANEF) and in July 2021 she took over as executive director of the community media online and print organisation, the Association of Independent Publishers (AIP).