Gay culture, a term popularised that explains the lived realities of gay people in society, is certainly not new, but has gained prominence through its use in social media. But how do we define gay culture and what are the undersides to it? The Daily Vox spoke to members of the gay community to find out what this term means them. Lithemba Lento, 21, honours student, Fort Beaufort
The environment you are a part of is a very important factor when you think of gay people and gay culture and understanding the term. I grew up in a very conservative household and community and these are terms that really donâ€™t exist there. Those spaces make it challenging for you because you can’t fully express who you really are and explore and learn your sexuality. I became more familiar with gay culture when I moved to varsity, and I found that space makes it more easier for you to be yourself and you become more comfortable with being who you are, as a gay person. I am not saying that it is an all-good culture and all, but I really think that it is a very needed culture in society to help a lot of us come to terms of feeling comfortable with our sexualities. It also helps us members of the LGBT community to learn more about sexuality, and the fluidity of sexuality and to also strengthen unity within the queer community. I am still currently learning more about this culture myself, as a member of the gay community. Sivuyile Mtshemla, 31, entrepreneur and queer activist, Eastern Cape
For me, gay culture is really about inclusion and acceptance in order to normalise being queer. What this culture has taught me going forward is to not put everything in a box, because we now have his culture of being woke and people speaking freely and are fluid. People also tend to forget that there are other people who cannot be a part of this narrative, like down-low (DL) men are excluded from this narrative, and not thinking about how this culture affects them, in terms of being open and out in a culture that does not accept them. The underside of this culture, we are not opening to every queer personâ€™s experiences, and we are not willing to embrace each otherâ€™s experiences.

While some members of the gay community feel that this is a much needed culture to help with learning about sexuality, fluidity and acceptance, some gay people feel that this culture indirectly feeds into homophobia by enforcing acceptance onto heteronormativity. Yonwaba Mbarane, 22, communications intern, Cape Town
Gay culture is something that I never really thought of. But to me, I would define it as the kind of person that I portray myself as, socially. It’s a lot of facades and a lot of versions of yourself, depending on where you are and who you are with. Itâ€™s essentially more about assimilation, just to make the other people you are trying to accommodate. I really think thatâ€™s a bad thing to do all together, because you are forcing yourself to change in order to make another person, who is most probably a straight person, feel comfortable, which feeds into the whole homophobia narrative. You have to be a certain kind of gay in order for you to be accepted. We basically coined this term and created his culture to get acceptance from people who still will not accept us for who we are. Itâ€™s understandable, some people donâ€™t deal well with rejection, but at the same time this could drive gay and bisexual men into depression and struggling to define themselves. Sometimes, people expect me to alway be the Centre of attention. For example, people would say â€œYonwaba dance for us,â€ and the moment I refuse, then I get flack for that, and seen as â€œless coolâ€. Itâ€™s like I cannot be a human being like a straight person, because of my sexuality. Kehalemo Mokhaba, 22, honours student, Free State.
What I realised is that gay culture actually differs according to the people that you surround yourself with. Iâ€™d say that gay culture is mainly influenced by the society we grow up in or the kinds of societies we associate ourselves with. So for example, when I was in high school, what I considered to be gay culture was non-existent because that space did not allow for me to express myself how I wanted to. Compared to university, where create spaces where we can be able to express our queerness. But the reality is that, this culture has put us through a lot as gay people and what makes it more sad is that, we all have focused on the rainbow and â€œprogressiveâ€ side of it which has overshadowed the harsh realities gay people face. For example, I can be seen as this flamboyant boy in crop tops and shorts in the club but I get cat called every every time in most spaces and that is always downplayed by people and friends, because oh â€œyouâ€™re sexy, take it as a compliment,â€ and you have to keep it moving after that.

Voxes edited for brevity and clarity. 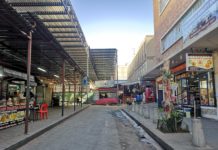