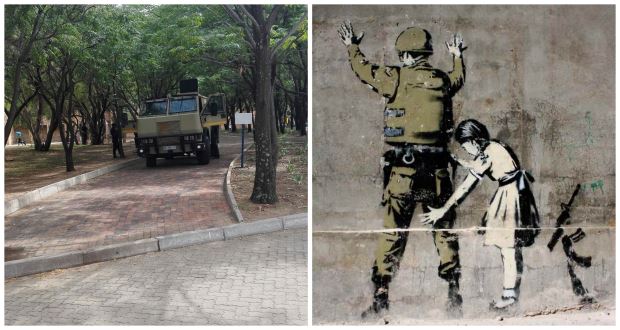 GOPOLANG BOTLHOKWANE shares how covering the North-West University (NWU) protests kept reminding him of Palestine â€“ a country he only knows from books and international news reports.

I read somewhere that in Palestine you can easily spot an Israeli if they ever got mixed up with the people. Theyâ€™re not settled, always looking over their shoulders. Palestinians call it â€œoccupation paranoiaâ€. If the Israeli was to get lost and started seeking directions they would be helped, but with a deep suspicion and mistrust.

Last Wednesday, as I was seeking answers as to what exactly happened between students and management of NWU Mafikeng I felt like that Israeli walking through the streets of Palestine, curious about settlements.

I kept announcing to everyone that I was a journalist, and the only one on the scene. Everyone I spoke to seemed to like that I was there â€œto seeâ€ but no immediate trust card was granted.

As a journalist, as an alien, I had to dig a little deeper, put away my cell phone and notebook and converse to try and belong.

It wasnâ€™t long before I found myself running from one passage to the other with students.

Suddenly, I was no longer the alien seeking answers but part of the masses trying to duck bullets. As I ran around from one passage to the other I kept asking students where do journalists usually set up or stand when thereâ€™s a big media story on campus. You know, so I could watch. Had private security not been there, you could see from the faces of students and staff that they wouldâ€™ve broken down with laughter at the audacity of a stranger walking with them in hell and expecting a special reserved place to witness the hell they survive in.

I remember at one point I was running with an SABC cameraman and a student ran past him and said, â€œDid we not say the revolution wonâ€™t be televised?â€

Suddenly, I was no longer the Israeli stepping out of my comfort zone for a while. I was suddenly a Palestinian trying to duck the very bullets seeking to reinforce my oppression.

When life imitates TV
The only Palestine I know is from the BBC and Al Jazeera, but what I saw on campus last week resembled the Palestine I saw on TV.

The smoke that covered campus was like that of Israeli bombs over Gaza.

The rhetoric from officials at the height of it all was as dismissive as that of American and Israeli politicians.

The lack of emotions on the faces of private security guards patrolling campus with rifles was not very different from the â€œbusiness as usualâ€ attitude I often see displayed by Israeli soldiers on various news reports .

The mix of resilience and hopelessness on the faces of the many students I spoke to, reminded me of the faces of children of Gaza who carry on with life under occupation as if they didnâ€™t go to bed dreaming of a better tomorrow â€“ like not once were they ever naive enough to think things will change.

I remember reading Susan Abulhawaâ€™s Mornings in Jenin, and on the protagonistâ€™s arrival in America she had found herself in a situation where a gun was pointed at her during a robbery in a restaurant she worked in. She was not shocked or in a state of panic. Instead, she found it amusing that someone was pointing at her – a girl who went to bed with Israeli M-16 assault rifles in her face â€“ this small weapon, in contrast, was really just a toy.

Every time I came close to the armed security guards patrolling campus I felt concerned, not secure. I could not imagine myself living with something as huge as a nyala around me. If a nyala packed with a group of armed guards to me announced death, what do fully-geared military personnel and their sophisticated weapons meant for conventional war patrolling the streets announce to the children of Gaza?

“Please be reasonable”
On my arrival and at many entrances, my backpack was searched. It felt like someone was fiddling with my hard-won right to report anywhere in my country without fear or favour. I was not entering the head offices of the CIA or the White House – I was about to walk into a campus in my hometown!

If a few light touches on my body and bag made me feel as if I had been stripped of my dignity, how then do Palestinians feel at the countless checkpoints that have existed for decades? How then do they feel when are unable to leave Gaza to seek medical help? Why do we undermine their outrage?

As the Â NWU Mafikeng campus burned, students were condemned for their actions. How dare â€œtheyâ€ burn a building at a sacred university? The students are under siege and the outrage is over buildings.

I listened to vice-chancellors and politicians talk about dialogue and how students â€œneed to be reasonableâ€ and â€œcome to the table.â€ As I listened I thought about the countless times Israelâ€™s Prime Minister Benjamin Netanyahu said he was committed to a two-state solution of Israel and a demilitarised Palestine, meaning Palestinian statehood must happen on Israelâ€™s terms. I thought of the Palestinian Liberation Organisation and its current president Mahmoud Abbas, and their lacklustre leadership. On thinking about NWU Mafikeng and the arson, I thought about the mediocre Hamas rockets that can only barely strike down a single house, let alone a suburb or a city. I thought about how these rockets have been used to justify the obliteration of Gaza and her people.

I can admit that what happened at NWU shocked and disgusted me. But to a point. NWU is only a campus. People go home. The campus will be repaired.

Even I, as a journalist, the alien, the Israeli visiting the occupied territories, will go home.

Palestine is a country, a homeland. Where will they go?