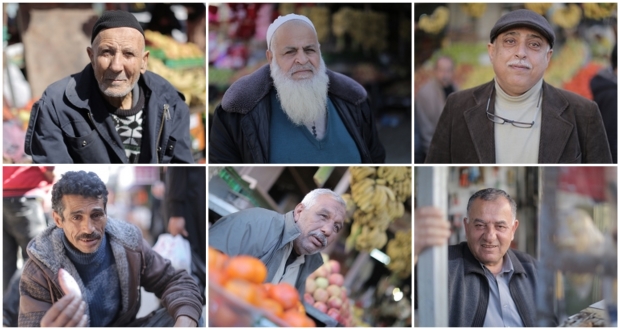 According to the Global AgeWatch Index, Gaza and the occupied West Bank ranks very low (93rdout of 96 surveyed nations) when it comes to the lived experiences of its senior citizens. The ongoing conflict, and its impact on housing, jobs, and health services means that life is very tough for senior citizens in this part of the world. Often, amid the death and the destruction (and continued reconstruction!), the elderly are often forgotten, even excluded from the conversation. And in a place like Gaza, where so much has happened and yet remained the same for decades, what are some of the most cherished memories of its older citizens, and what might they teach us? THE DAILY VOX spoke to some of the grandfathers, fathers, uncles and brothers of Gaza about their most cherished memory growing up in the territory. Mohammed Al-Manasra, 82, street hawker
The memory that I most cherish is when I was living my hometown, Beit Jarja, until the Zionist militias destroyed it and kicked me out at the age of 15. Man, what I can I tell you about Beit Jarja! It had gorgeous landscapes, and I lived in a beautiful house. I used to work the land with my parents, and oh, the vineyards! I used to walk the fields every day and that feeling was unimaginable. Those were the times my boy, the best in my life. After I was kicked out of my hometown, everything went downhill. I lived in a tent in a refugee camp, and then it was upgraded to a room structure covered with metal plates, and now itâ€™s a small house. I long for my home in Beit Jarja, and I know that one day I will go back. I am never losing hope. Mustafa Al-Hayek, 66, retired
My best memory was in Beersheba. And when I remember Beersheba, I think of sheep, yellow sand, my friends, the sound of the flute, and the bonfire. During the day, I used to herd, taking care of the sheep. And at night, Iâ€™d sit on the soft yellow sand, hanging out with the Bedouins. We would sit around the bonfire, grill, eat yoghurt, and drink milk. And the best part was listening to my friends playing the wooden flute. Those were the days I felt safe and secure. I was happy. Ahmed Al-Safadi, 52, unemployed
I do not have one specific memory that I can pinpoint and tell you that I cherish. However, I miss the old times, when people used to be simple, loved each other. I would say those were the 80s and the early 90s. Things were not as complicated then. People were kind and cared for each other. It started to change after that. Now, people are divided and each for his own. These are hard times we are living in today. Fayez Al-Betar, 63, works in a fruit shop
I have no past memories that I cherish growing up or living here. Palestine? What Palestine? Let us not kid each other. The memory that I will cherish the most will be the day that Palestinian refugees are able to return to their homes, when we become free, when we retrieve our lands. This will not happen as long as we are divided. When we unite again, when we win against the oppression of our enemies, only then I will see Palestine. And that will be a day to remember. Mueen Al-Sakani, 50, fisherman
The best days were when we used to work in Israel. I used to work at a flowers shop, where we decorated halls for ceremonies like weddings. I used to earn a lot of money. I would come home after work and buy a lot of things: food, clothes, and furniture. I used to save up money for my kidsâ€™ education. But working in Israel became difficult when the second uprising started, and became impossible once Yasser Arafat died. Faysal Al-Tabbakh, 62, merchant
I would say my graduation day of college was my most cherished memory. I struggled a lot to obtain my degree. I studied geography in the Beirut Arab University in Lebanon. I started in 1972. A couple of years later, the Lebanese civil war started, and I could no contact my family. I had to flee, so I fled to Egypt to continue studying at the university branch there. Things did not work out, so I moved to the branch of the university in Jordan. Even though I only had books for 3 of the 12 classes I had my senior year, I passed all my exams, and I graduated.