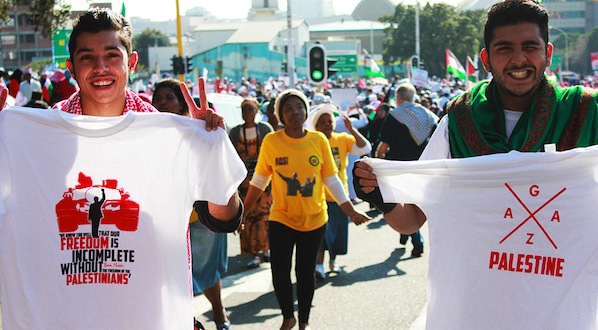 Listen to an audio version of this story here:

When I heard that 100,000 people were expected to march for Gaza in Cape Town I was sceptical. Could Slaapstad amass in such numbers? But my scepticism was swept away when, on Saturday, thousands upon thousands of people spilled through the city crying out for the freedom of Palestinians. What struck me most was the diversity of the crowd and the passion of their demands. There was no â€œright of admission reservedâ€ at this protest, and for the first time in years I felt the unity of the rainbow nation.

Growing up in Cape Town, my mother often dragged me to pro-Palestine protests. Always, my gaze would dart through the crowd searching for supporters of various faiths, cultures and social backgrounds. But all I saw was Muslims. Islamic prayers blared through loudspeakers as protestors shouted â€œTakbeer! Allah hu akbar!â€

As a Muslim, these prayers had always touched me, but their ability to frame the crimes against humanity in Palestine as a religious, rather than a political issue, has over time made me wary. The fight for Palestine is after all a humanitarian and political struggle, not a religious one. As a young adult, I came to criticise these protests.

But when I arrived in District SixÂ on Saturday, I walked straight into a toyi-toying group of supporters from the Sesâ€™Khona Peopleâ€™s Rights Movement, a civil rights organisation affiliated with the ANC Youth League. They sang struggle songs, wrapped in the nostalgia of the fight against apartheid South Africa. They danced through the streets, bouncing this way and that in circles that brought the spirit of South African protest alive. As South Africans, this is how we march and protest.

But of course, the trolls came out to play.On Facebook, the Johannesburg-based group Jewish Voices for a Just Peace, which opposes human rights violations in Palestine, came under fire for calling on like-minded supporters to attend the Cape Town march. One of the admins on the Facebook group told me they often receive posts saying their â€œgrandparents must be turning in their gravesâ€. This kind of statement tries to use emotion and the historical vulnerability of a people to clamp down on freedom of expression. And yet I saw some of their supporters, including political cartoonist Jonathan Shapiro (Zapiro) at the march, carrying posters that said “Jewish not Zionist”. One man,Â wearing a bright red Foreigner t-shirt, walked tentatively. He had a sore back and the march took its toll on him, but still he protested.

A week ago, the Zionist lobby led a pro-Israeli rally in Johannesburg. Demonstrators were obliged to bring identity documents â€“ right of admission wasÂ reserved for a select few.

Anti-semitism exists, and police confirmed the arrest of a man armed with guns and knives in the vicinity of the rally.Â But surely bag checks and body searches would have been a less discriminatory and more effective way to ensure the safety of supporters. Lest we forget,Â black South Africans were notÂ so long agoÂ required to carry passbooks to enter parts of the city.

The paradoxes between the Zionist rally and the pro-Palestinian march were stark, and provided a glimpse into where Palestine stands now, caught in the stranglehold of apartheid, and where South Africa is today, a democratic nation wrestling to be united, in the wake of economic inequality, and racial and cultural prejudice.

The solidarity march this weekend showed that South Africans from all walks of life can yet come together to protest against injustice. On Saturday I watched as Jews, Muslims, and Christians rubbed shoulders in District Six, all decked out in Palestinian colours, saw members of the EFF, ANC and PAC dance and toyi-toyi together, heard the voices ofÂ Bangladeshis from the Islamic Forum Cape Town, while all around us protestors in keffiyehs were streaming through the streets. The city beat with the movement andÂ color of people, in a way I had never seen at another protest.

I wanted to salute Cape Town for bringing the rainbow to life. South Africans were once governed by an apartheid regime born from the depths of colonialism and yet our rainbow might still have a chance. When will the Palestinians get theirs?