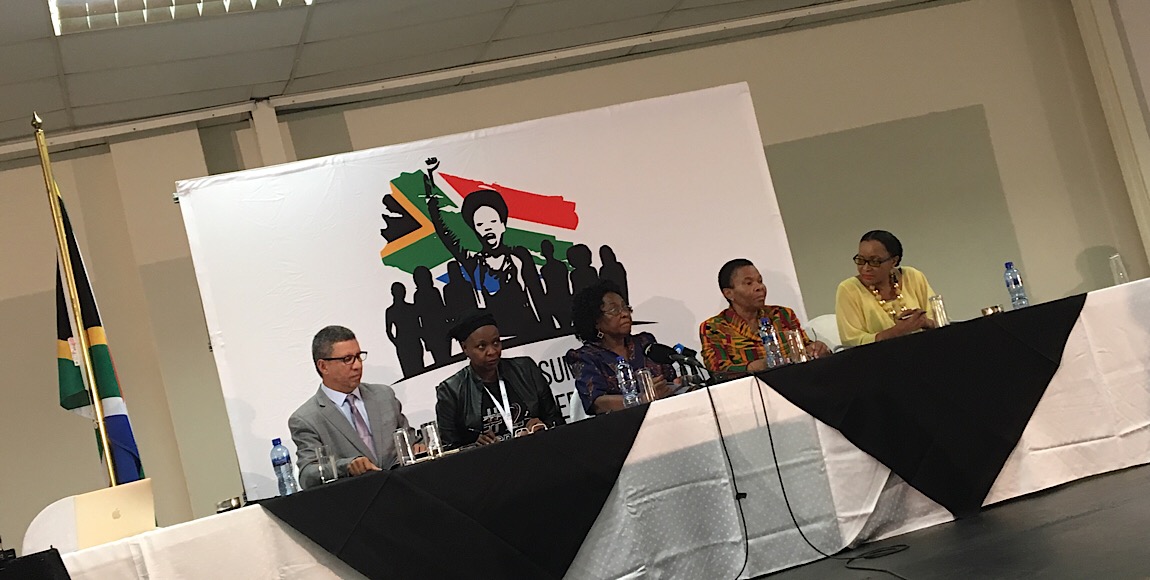 “We are satisfied that most delegates and stakeholders at the summit have signed the declaration with amendments,” said the minister of social development Susan Shabangu at a briefing, which concluded the The National Gender Summit. Shabangu said now that the declaration has been adopted, the next stage is about implementation. The summit, organised by The Total Shut Down movement and the government, brought together civil society organisations, gender activists and government to come up with solutions to end gender-based violence (GBV) and femicide.

Regarding the six-month national development plan that was launched on day one of the summit, Shabangu said they can’t afford to fail in the implementation as it rests on the hopes of the womxn all around the country for it to succeed.

Special advisor to the president Olive Shisana told media: “It’s important to improve all sectors. The summit is the result of the mobilisation of *womxn who marched all around the country. She said government will be creating a multi-sectoral approach to deal with gender-based violence with the summit resolving that there should be a collaborative effort between political and community leadership and civil society.

A seven-page document of declaration filled with 16 resolutions has been created which was presented to media. This included, amongst others, the need for political and community leadership to support the eradication of GBV, the setting up of an interim structure with the objective to establish a national, multi-stakeholder council, and convening a meeting of all communicators on GBV to adopt ethical guidelines for sensitivity.

The master version of the declarations from the summit was handed to The Total Shutdown Movement, government ministers as well as civil society who, after deliberating on it, decided to adopt the summit declarations with edited inputs. The declaration emcompasses all the discussions that took place during closed commissions from day one and two of the summit.

A disagreement occurred when a womxn whom The Total Shutdown felt had violated the safe space of the summit apologised but left the room immediately. She had posted the images of one of the womxn who had shared her story of being a survivor of GBV. “We are showing alot of anger at what was done in a safe space,” The Total Shutdown’s Mandisa Khanyile said addressing the crowd. Khanyile said the movement doesn’t wish to collapse the summit, but needed people to understand that they were angry at the “insecure apology” from the womxn.

From the floor, input was allowed. Civil society organisations raised the issue that there was no inclusion of hate crimes and hate speech, burden of diseases that stem from GBV, the need for gender transformative language, addressing the lack of political will, and the need to root out incompetency. The chair of the proceedings said those inputs would be heard, and added to the final document.

The Gender Summit Failed To Impress

The Commission for Gender Equality’s Lulama Nare took the room through the declaration between South African womxn, civil society and the South African government. “This declaration represents womxn from all walks of life,” Lulama said. Lulama decried the ineffective implementation of policies as well as the inadequate criminal justice system response.

The Commision for Gender Equality has endorsed the call by President Cyril Ramaphosa for all South Africans to respond to the fight to eradicate GBV.

Gender activist Nyiko Lebogang Shikwambane told The Daily Vox they hope to establish a interim national council against gender-based violence moving forward with the submissions from the summit. “There were a lot of submissions made – not all could be included in the five main questions we wanted to address. There will be a report of all the submissions that were made that will be sent to the presidency.”

Day one and two were made up of commissions where six thematic areas – prevention, laws and policies, response and support, accountability and resourcing, coordination, and communication – were discussed. These were close sessions with no media being allowed in the discussions. The outcomes of these commissions were relayed during the final press briefing out the summit with the declarations being adopted.

The term *womxn is used to be inclusive of all femme-identifying bodies, not just cis-gendered women.