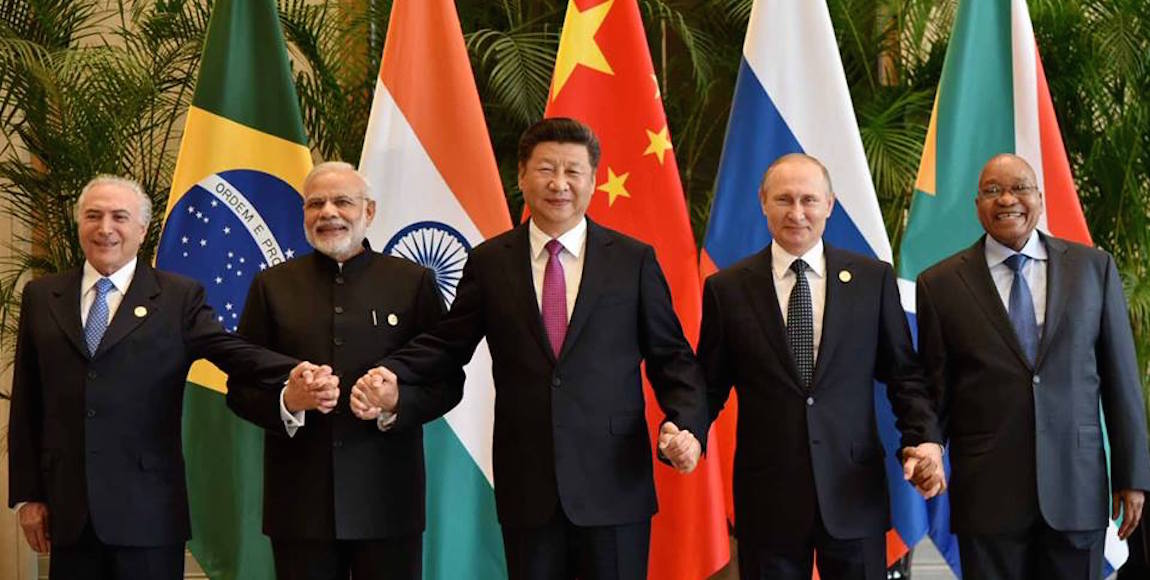 Over the past few months President Jacob Zuma, and many of his supporters, have argued that the attacks on ANC and instability in South Africa are part of a plot by Western powers to discredit the leadership of the country. According to them, President Jacob Zuma is being targeted for challenging white monopoly capital, pushing for radical economic transformation and siding with the Brics (Brazil, Russia, India, China, South Africa) bloc of emerging economies against Western economic imperialism.

We must deal with this idea that Zuma is leading us to the the promised land via BRICS. My candidate for political lie of the decade.

For many who identify as socially progressive, are critical of Western imperialism, and wish to see South Africa transform to serve the black working class majority, this rhetoric is proof that Zumaâ€™s â€œunorthodoxâ€ actions, such as the #CabinetReshuffle, are possibly a means towards a legitimate radical end.

To unpack this, the Daily Vox spoke to three political analysts – Sithembile Mbete, Aubrey Matshiqi and Steven Friedman – about whether President Jacob Zuma and BRICS truly represent a radical alternative to the prevailing, Western-centric world order.

Intro to SA geopolitics and Brics

â€œInternational relations is about two things, strategic cooperation and strategic competition. But more importantly it’s about knowing where a healthy balance in your national interests lies between these things,â€ said Professor Aubrey Matshiqi, research fellow at the Helen Suzman Foundation.

He said that, since 1994, South Africa has been trying to chart an independent course in foreign policy. Independence, Matshiqi argued, is not the same as delinking from those countries you do not share the same outlook or ideological vision with – independence means that you must be able, with each foreign country, to freely determine the nature of the relationship you would like to have with it.

According to Matshiqi, South Africa decided to prioritise relationships with countries â€œlike usâ€ – first priority going to the African continent and its agenda, then South-South relationships, followed by relationships outside of the Western sphere of influence.

University of Pretoria political sciences lecturer, Sithembile Mbete, agreed that the 21st century has seen a change in the balance of power of developing world countries, most particularly China and India, against the West. â€œBric,â€ she said, was a term that was coined by international investment firm Goldman Sachs in 2003 to identify countries (Brazil, Russia, India, China) they believed would come to challenge the economy of the USA by 2025 – Bric was fundamentally a term to guide investors in where to invest their money. Two years later, Bric countries formally met at the UN General Assembly and in 2010, after successful lobbying from President Zuma, South Africa was added as the â€œSâ€ in â€œBricsâ€.

This, Mbete said, was â€œto include South Africa not only for itself, but because you couldnâ€™t have a big developing world entity that represented Asia and Latin America, but not Africa.â€

Added to this dynamic, of course, was the fact that ideologically all Brics countries had either embodied, or at least flirted with the some form of leftward political orientation in the past. At the time of Bricsâ€™ conception, for example, the Communist Party governed India and the Workerâ€™s Party was in power in Brazil. With China and Russiaâ€™s communist histories, and the ANCâ€™s own ideological roots, Brics represented for many the rise of the new political left.

@SizweMpofuWalsh BRICS as a counterbalance to the geopolitical orthodoxy of Washington consensus economic policy prescriptions is a theoretical possibility.

The failure of Brics as an alternative to Western powers

Professor of political studies at the University of Johannesburg, Steven Friedman, however says that though the prospect of supporting Brics over Western countries sounds appealing, in practice this support has become more about opportunistic rhetoric in South Africa.

â€˜Weâ€™ve been members of Brics for some time now – I certainly havenâ€™t seen any coherent attempt to position Brics as an alternative to the traditional trading partners,â€ he said.

Friedman argued that if South Africa was serious about Brics as an alternative you would expect more mutual development plans and common positions of economic issues – yet very little of this is in fact going on.

Mbete said that in relation to the Brics bank – known as the New Development Bank – and all other practical matters around trade, South Africa hadnâ€™t got any more concessions in the Brics environment than it has received globally.

â€œIt seems as though in the official work of the Brics, and the official agreement, South Africa isnâ€™t benefitting all that much more than from other agencies,â€ she said.

@SizweMpofuWalsh And for those who think we’ll meet our financial needs through BRICS bank, SA got next to none of the concessions we wanted in negotiations.

â€œIâ€™m not sure to what extent many of these zealots have actually met senior Chinese businessmen, for example. Anyone who has will tell you that these guys are not radical. Theyâ€™re very conventional businessmen – theyâ€™re not here out of third-world solidarity,â€ he said.

So what exactly is the radical alternative that President Jacob Zuma sees in Brics?

Mbete said one possibility is that, despite not receiving any more benefits from Brics, South Africa was in a better position with them in the sense of having a seat at the decision-making table – something we are not afforded to the same degree in the West.

Another possible appeal of Brics, for Friedman, was that the blocâ€™s foreign policy does not, for example, tend towards bombing Middle Eastern countries in the manner the West does – though he felt Russia itself wasnâ€™t currently the poster-child for foreign affairs of late.

But besides that, the analysts found very little that could be considered â€œradicalâ€ or â€œleftistâ€ about Brics.

Friedman pointed out that today India is governed by the Bharatiya Janata Party (BJP) under Narendra Modi – the party are considered right-wing Hindu-nationalists, while Brazil has just been through what â€œlooks very suspiciously like a right-wing coupâ€.

This means you have a Brazilian government that is to the right of Germany (and even the UK in some senses) along with an Indian government that positions itself with the international right, he said. Friedman concluded there isnâ€™t a broadly shared leftist vision between the parties. Rather, if you considered who was in power in the Brics countries, if there was a shared Brics vision, it would probably be a right-wing vision.

BRICS is, at best, a desegregation of global elites. Since when should we allow looting because they are going to ‘save us’? Utter hogwash.

Mbete found that Zumaâ€™s radical rhetoric was not only factually questionable, but also inconsistent over the twenty-something years heâ€™s been in the public eye.

â€œWhat we know for sure is that President Zumaâ€™s first overseas trip was to England, the UK. And it wasnâ€™t as if he was there speaking against British hegemony and colonialism, he went there to woo investors,â€ she said.

Matshiqi made sense of the presidentâ€™s double-talk by outlining that sometimes leaders appeal to the national interest to benefit personally.

But, he said, sometimes leaders can also do both: make sure that the country benefits from something such as the nuclear programme while an individual, or group of individuals, personally benefits as well. Even if motives are not completely noble, a leader may also feed into the agenda of developing the antithesis to the current global order, he said.

â€œSo you may be governed by values that are contrary to the values of the US, UK or France for instance – values that are noble in content. But you can at the same time hide your real interests behind these noble values,â€ he said.

So what do Brics and President Jacob Zuma have in common when it comes to radicalism or opposing Western economic hegemony? According to these analysts, both may be radically perceived, but beyond the rhetoric, this sense of radicalism, of existing as an antithesis to the West, is insubstantial. It is nothing more than geopolitricks.