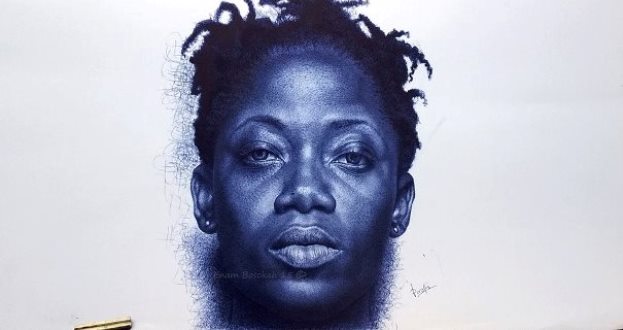 Without the use of fancy filters or expensive materials, Ghanaian Artist Enam Bosokah makes striking art with only the use of a ballpoint pen. DANA DA SILVA and PRESANTIE REDDY spoke to Bosokah about his work.

All of Bosokah’s strikingly intricate artworks are made only with the use of a pen. At a very young age, he already knew that he had a passion for the arts. He recalls, “I remember in an elementary class, we had to draw an animal. The teacher walked around to see how we were doing and she saw my work and encouraged the whole class to come over to see how I drew. She described it as ‘amazing.'”

He continued with his art after high school, enrolling at a university in Ghana and studying art. He got his degree and decided to check out “the reality on the field of practice” before beginning his Masters in Fine Arts degree. According to Bosokah, his style of drawing is “freestyle”. He does not name it specifically because it can change at any moment, so he does not want to confine it to one type of style. As he developed his skills over the years he found that using a ball point pen was harder, but only because it is up against paint and graphite works. Bosokah has a simple reason for using a ballpoint pen. “It sends out a loud message to the African community, one that almost everyone can relate to. I feel that most Africans underestimate themselves to the extent that they do not dare to dream. Just as we do not accord the pen the respect that it deserves, in having played a substantial role in making the great men of our societies today. Let us make every opportunity count.” His inspiration for his art comes from his surroundings and the people that he sees around him, and from the many black icons that he has drawn. He draws inspiration from these because he believes that they “made a huge impact through their service to humanity and to the world.” He believes that anyone can make a positive impact globally and he is hoping to do that through his drawings. For Bosokah, the bigger picture is to grow as an artist and a person. “Art within me keeps growing and growing. I don’t know where the painting thing is going to take me, but I am willing to explore. I want to get deep into my subject and focus on that inner being of my subject and that it what I try to capture, the essence of a person through an original portrait drawn only with a ballpoint pen,” he says.

Even though he is a talented artist, he still feels he hasn’t found his time in art yet. “I want to make it all the way to the top. I want people so many different countries wanting my work. Regardless of what medium: my pen works, my sculptures, my paintings. Twenty years from now, I want records of my art and how it was made a success. I want to inspire people all over the world,” says Bosokah.

When it comes to art, Enam Bosokah thinks that it is not about the end result. It is about the journey and how the journey makes you think and feel. He is a true artist willing to wait and sell a few items or do a few drawings at a time just so he can make it through for the time being.

You can see more of Enam Bosokah’s works on his Facebook page.

All images courtesy of Enam Bosokah.