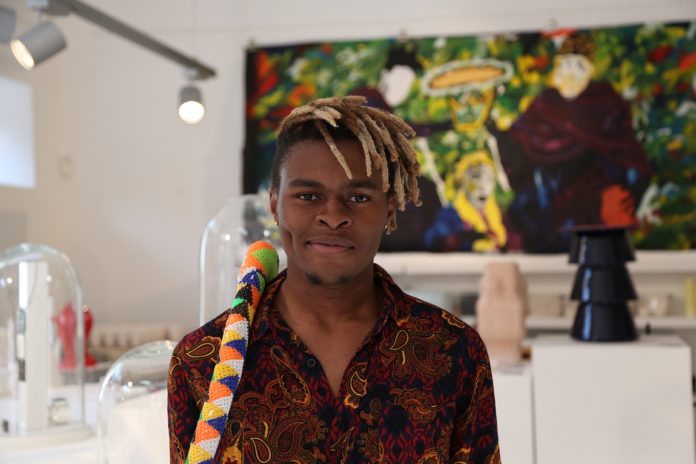 Giggs Kgole is shaking up the art world. At just 22, Kgole has showcased his artworks in South Africa and in Europe, making strides in achieving his dream of becoming an internationally recognised visual artist. This week — between July 29 and August 2 — the South African High Commission to the United Kingdom of Great Britain and Northern Ireland, will be hosting his solo exhibition ‘Divine’ in Trafalgar Square, London. This, after SA High Commissioner and avid collector of Kgole’s work, Nomathemba Tambo, invited him to exhibit in London.

‘Divine’ shown in London for the first time

“The general theme around it — the exhibition is called ‘Divine’ — is the pureness and greatness we find in human beings,” Kgole said, speaking to The Daily Vox from London. “It’s how we can be inspired by each other, and how we have the power and the ability to inspire others.”

The exhibition will feature over 20 selected works.

“It’s a very interesting exhibition, it’s a combination of three years worth of work,” Kgole said.

The works were started and completed between 2016-2019 in South Africa, Italy and France. Kgole is currently completing a six-month artist residency in Vallauris, France with Undiscovered Canvas. He is also completing his art history degree at the John Cabot University in Italy, where Kgole was awarded a Presidential full scholarship.

‘Divine’ is an ongoing exhibition, and has been shown in Paris, Cannes and Monaco. This is Kgole’s first exhibition in London, and he is eager to use this opportunity to build relationships with artists and galleries in London for future exhibitions and shows, he said.

Kgole works across mediums. But his work is typified by his use of anaglyphs: printing two versions of his composite photographic images in different colours (usually blue and red) onto canvas. He then applies collage and paint to the printed work.

Kgole has come a long way, and still has further ambitions

Kgole says he is “very excited” about the exhibition. “It’s funny because Nomaza and I were talking about where we were about three years ago. She was saying that she [had been] exhibiting in a small village in the south of France,” Kgole said. Dedicated to promoting African art in Europe, South African art curator Nomaza Nongqunga Coupez, and owner of art promotion agency Undiscovered Canvas, has curated the exhibition.

“I was thinking about myself, reflecting… It was a year after high school in 2016,” Kgole said. Born in Tembisa, and raised in the Limpopo village of Kutupu, Kgole was born to a different life. After completing primary school with top honours, there was no money for Kgole’s further schooling. But Kgole was determined to carve out a better future, and won a scholarship to the elite St. John’s College in Johannesburg. It was here where he realised that he wanted to make art his passion and livelihood.

“I told myself, I was telling the world, and the people around me that I want to become an international visual artist. Some of the guys were laughing and saying, ‘Get real’. I remember starting in a friends garage. All alone in that space, I told myself, ‘The world’s going to see these works and hear these untold stories in my works’,” Kgole said.

When Kgole finished school, he didn’t have funds for university. But luck was on his side and Kgole was offered a job by international visual artist William Kentridge, who then mentored Kgole. When he quit working for Kentridge, Kgole poured his time and resources into creating a body of work.

In 2016, at 19, he made the Sasol New Signature Top 100 and exhibited in his first professional exhibition at the Pretoria Art Museum. From then Kgole had various exhibitions including a solo exhibition at Africa’s oldest commercial art gallery Everard Read.

“It’s just really amazing being in London and reflecting on that, wondering what the next few years are going to bring. I’m very excited and honoured. The universe has been kind to me having been able to fulfil this dream,” Kgole said.

All pictures supplied by Giggs Kgole