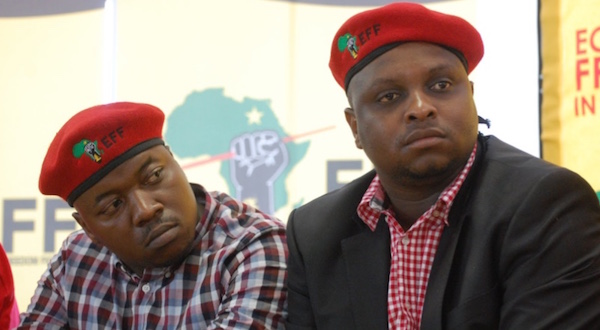 EFF chief whip and “Commissar in Policy, Research and Political Education” Floyd Shivambu has attained his masters degree in political science from the University of the Witwatersrand.

The Economic Freedom Fighters (EFF) may still be ridiculed by some as a bunch of radicals without substance, but there is more to the political party’s leaders than flashy red overalls and catchy chants.

Shivambu’s name was posted on the final graduation list circulated by Wits University’s HumanitiesÂ Faculty on Tuesday. He is set to graduate on December 10.

It’s rumoured that Shivambu was meant to have gone to Oxford University to do his masters degree, but remained at Wits, his alma mater, to complete his research report, titled “South Africa’s negotiated transition to an inclusive political system”.

Shivambu has seen his fair share of scandal. While still a member of the ANC Youth League, Shivambu was known for being foul-mouthed towards journalists. In 2010, journalist Carien Du Plessis laid a charge against Shivambu after he allegedly called her a “white bitch“. He later apologised and settled Du Plesis’ legal bills.

On the same day of the court hearing, the ANC also served Shivambu with a three-year suspension from the ruling party, for bringing the ruling party into disrepute. The expulsion of Shivambu, together with Julius Malema and several other Youth League members, eventually led to the birth of the EFF.

More recently Shivambu and other top-ranking EFF MPs were suspended from for 30 days without pay as punishment for disrupting Parliament by chanting “Pay back the money” while President Jacob Zuma was answering questions before the house.

During his time at Wits University, Shivambu completed an undergraduate and honours degree in international relations and politics. He was also the president of the Student Representative Council (SRC) from 2004 to 2005.

Shivambu is not the only fighter with an impressive academic record. The EFF’s national spokesperson Mbuyiseni Ndlozi holds a masters degree in political sociology from Wits and is currently a PhD student at the same univisersity.

The EFF may often find itself in trouble in Parliament and with journalists, but at least they don’t have to worry about a fake qualification scandal.