Home Politics What are we going to do now that Trump really is president?
WhatsApp
Facebook
Twitter
Email
Print 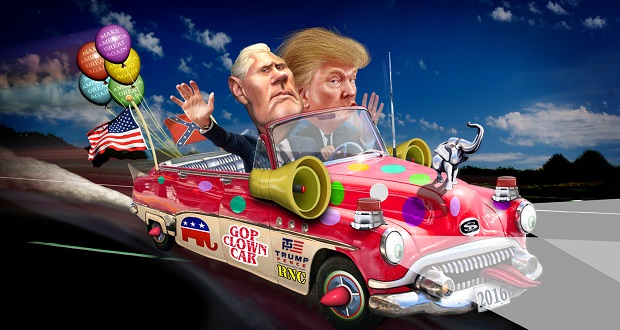 Donald Trump is now the President of the US. And as he recited his oath of office on 20 January, many in America and around the world thought: what the hell happens now?

Well, we werenâ€™t left to wonder for much longer.

Just hours after Trump took over the presidency from Barack Obama, and the transition between the administrations became complete, several changes seemed to be taking place already.

Visitors to the official White House website found that a few pages on the website were missing, most notably the White House LGBT rights page as well as the references to climate change.

Usually, when there is a change in presidency in the US, there is also a transfer of all digital assets. However, not only were Obamaâ€™s policies moved to a new domain on the internet, but Trumpâ€™s policies were found to be completely different. His people have completely erased the policies on LGBT rights, while the climate change policies have been replaced with new policies – which, for the most part, ignore climate change and global warming. His administration really did not waste time.

On 23 January, Trump went on to cement his reign by signing off on three executive orders. One was to withdraw from the TTP (Trans Pacific Partnership) – a trade deal that the US had with states. This decision has gained the support of many, including Democrat hopeful, Bernie Sanders, because it is has threatened the wages of many American workers. However, just like with the policy replacement for Obamacare, Trump doesnâ€™t seem to have a replacement policy.

What else can we expect?

Well, besides Trump promising to institute a registry for Muslims, repealing Obamacare, getting rid of Planned Parenthood, getting his little hands on the nuclear codes and the drone controls, we have to think about what his presidency is going to mean for Africa.

It should be noted that Obama was no great saviour for Africa. Even though there were great hopes that the first black president was going to help Africa and bring a new era of relations between the continent and the US, this was not to happen. However, what his administration brought more than anything was hope. The message that Obama brought to the US spread to Africa as well, and thatâ€™s something that wonâ€™t be going away anytime soon.

And maybe in Obamaâ€™s lasting legacy on the continent lies the reason why Trump will be bad for Africa. With his â€œAmerica Firstâ€ mindset and plans to build walls and registries for anyone he regards as â€œdifferentâ€, this is most likely to inspire fear in many people around the continent.

Even though many states on the continent have legalised gay marriages and do not have bans on people from the LGBTQ+ community, there are even more African states continent that have banned homosexuality. In some states it is actually a criminal act.

If Trump continues to threaten many of the liberties of same-sex marriages as well as the rights of the LGBTQ+ community, many African leaders who are against the LGBTQ+ community might take this as encouragement to institute harsher laws in their own countries.

And South Africa in particular?

Even before running for president, Trumpâ€™s tweets about South Africa showed that he has some strong feelings about our country.

In 2013 he tweeted: â€œI really like Nelson Mandela but South Africa is a crime-ridden mess that is just waiting to explode â€“ not a good situation for the people!â€

While he said this in 2015: â€œAs I have long been saying, South Africa is a total â€“ and very dangerous â€“ mess. Just watch the evening news (when not talking about weather).â€

However, Ranjeni Munusamy, writing in Daily Maverick, notes that there are quite a few similarities between our president and Trump, such as their behaviour towards women, dodgy finances and the nepotism they practise in government.

So we should really hope that no close relations will be formed between Jacob Zuma and Trump, for all our sakes.

Since Trump is already turning out to be such a threat to everything that makes America great *cough – when was America ever great? – cough*, isnâ€™t the logical thing for Congress to invoke the 25th Amendment, and therefore get Trump impeached?

Impeaching Trump means the vice-president takes over, so Mike Pence would be the new president. And that’s not a good thing. Pence seems to be as bad, if not worse than Trump.

He is notoriously homophobic and anti-abortion. Trump, for the most part, seems to just be making decisions any which way without any political intelligence. Just take a look at @realDonaldTrump for evidence.

Pence, on the other hand, was the Governor of Indiana and has been a part of Congress. Pretty powerful positions on their own. This serves to make him quite a big threat especially since he is probably influencing Trumpâ€™s decisions already.

It still remains to be seem what impact Trump will actually have on the continent during his tenure as president but at the moment, it doesn’t look very promising for his relationship with Africa.