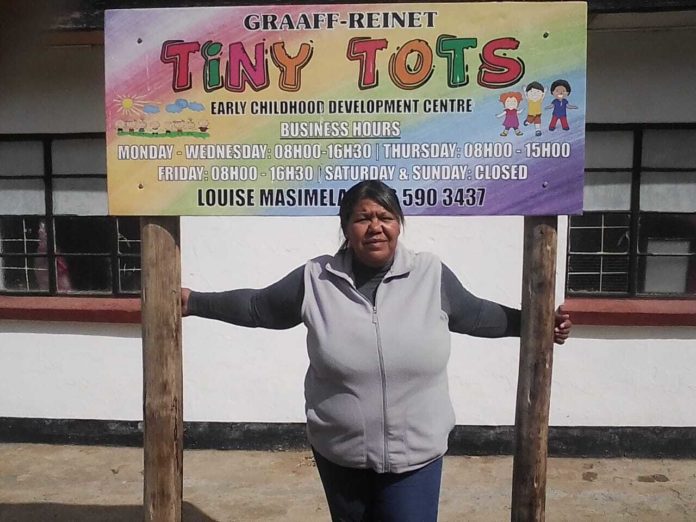 Graaff-Reinet has been plagued by a drought for seven years now. It is the fifth-oldest town in South Africa situated in the Eastern Cape. It falls under the Dr Beyers Naudé local municipality. In 2020, the municipality admitted to parliament it was running at a loss of R70 million. The Daily Vox spoke to Louise Masimela, a community activist about the town’s challenges.

Masimela runs an early childhood development (ECD) facility in Geluksdal, Graaff-Reinet. She is a community activist and journalist who spent 14 years working at a local radio station. She has always had a passion for the upliftment of children. This became amplified after seeing her community’s struggles.

“I could see how the government and everyone else has no interest in the lives of children in this community. I decided to concentrate on the kids and their education,” said Masimela.

Masimela said they don’t have water in their taps. The municipality keeps sending huge bills to indigent households, and ward councillors are of no assistance. This has been occurring since 2019.

“Pensioners are not using that much water or electricity,but they get these huge bills. We have people with bills of R13000,” she said. The non-governmental organisation, Gift of the Givers, intervened by providing a few water tanks in the area. “They will give a tank in my area; Geluksdal. That tank must cater for about 4-500 people. That is not enough. They are trying their best but we are still having challenges,” she said.

The drought in the Eastern Cape started in 2015. It was subsequently declared a disaster area and the government allocated millions of rands for drought relief. Poor water management and unpredictable rainfall had been cited as reasons for the drought. Local infrastructure was also regularly vandalised, worsening the problem. Areas like Graaff-Reinet that overlap with the Karoo desert have been hit the hardest.

Masimela cited housing, sanitation, crime and joblessness as major challenges. According to the Quarterly Labour Force Survey by Stats SA, the Eastern Cape has the unemployment rate in South Africa.

“Crime is increasing because of unemployment. At my ECD, they stole my water tank I received from the Gift of the Givers. My kids need to wash their hands and stay clean especially in the pandemic but they can’t. We don’t have running water,” said Masimela.

The African National Congress won a narrow majority of seats on the municipal council in the #LGE2016.

Masimela runs a registered ECD; Tiny Tots. The facility is COVID-19 compliant. Currently she rents her space from a church in the community. Tiny Tots currently has seven permanent staff who are all volunteers. They have not received any support from the Department of Social Development (DSD). The ECD battles to feed the children regularly, and has challenges with no running water. They also struggle with utility bill payments.

“Government structures do not cater to the communities here like policy says. They do nothing to assist ECD’s,” said Masimela. Masimela said there are a few more ECD’s in the area and surrounds that also need support.

The management of ECD services will migrate from the DSD to the department of basic education (DBE). This process is set to be complete by April 2022.

Masimela said they have been visited and data was collected, but was skeptical of the processes. “They even had me recorded incorrectly saying we are in East London. I am in the Karoo,” she said.

A message to the government of South Africa

Masimela said she had not seen one party address ECD issues in their campaigns. She said ward councillors are equally guilty. She asked to pose these questions to all the parties campaigning right now. “Why are kids not prioritised? Why are there children’s rights in the constitution but not implemented?”

She said she and many others are visible and asking for help.They are in dire need of personal protective equipment PPE and food. “We have to wake up at four  in the morning to get water. We get water again at 10 at night. It is not even hygienic. We are in a crisis and should be assisted immediately,” she said.

“People must know their vote is their voice. It is their power. They can elect the right people who will do them justice.” Masimela said.