Home Politics #GuptaEmails: So it turns out Jacob Zuma is planning to retire in...
WhatsApp
Facebook
Twitter
Email
Print 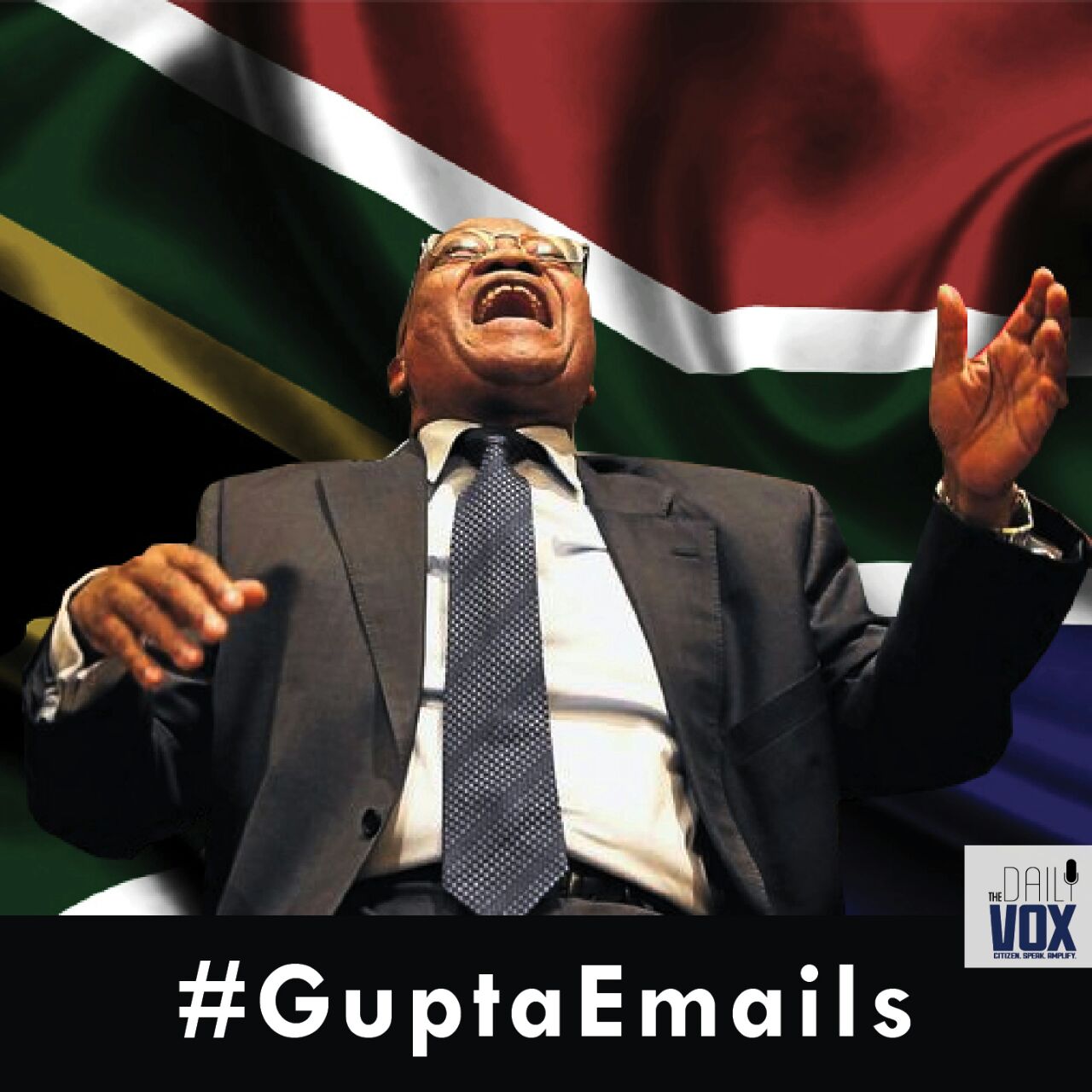 The Sunday Times and City Press both published a set of explosive articles on Sunday in which they expose an email trail between senior government heads, state owned entities and the Gupta family and their employees.

The correspondence between the parties showcase how involved the Guptas and their surrogates are in running the South African government. According to the Sunday Times, Sahara CEO Ashu Chawla emerges as a central figure, along with the Gupta brothers, in an “intricate web of state capture.”

The story is rather fascinating, in a WTF-type-of-way. But it’s also very depressing.

It turns out that the rot goes deeper than we might have first thought. Here is what you need to know.

President Jacob Zuma is planning to retire in the United Arab Emirates.

Two draft letters were sent to Ashu Chawla, Gupta owned Sahara Computersâ€™ CEO, from Tony Gupta and then to Jacob Zumaâ€™s son, Duduzane. In a draft letter prepared for Zuma to Abu Dhabi Crown Prince General Sheikh Mohammed bin Zayed Al Nahyan it said: “It is with this sentiment that I am happy to inform you that my family has decided to make the UAE a second home. It will be a great honour for me and my family to gain your patronage during our proposed residency in the UAE.”

#GuptaEmails: They reveal President Zuma’s plea to the Sheiks to grant him residency in the United Arab Emirates > More in #SundayTimesZA pic.twitter.com/ntONHZ4vGl

Zuma however denied that he is moving to the desert. His spokesperson said that when Zuma retires he will go home to Nkandla. That he will swim in his own pool. Okay, we added that bit about the pool.

The president called the letters â€œpure fabricationâ€ and said his son had never spoken to him about living in any other country.Â Zuma has routinely denied many other allegations, so we can only wait for this one to unfold to find out if he is catching the gravy plane to the middle east.

Zwaneâ€™s CV was send to Tony Gupta in July 2015, the next month he became the minister of Mineral Resources. Other emails show he was flown to Dubai on a Gupta plane and his accommodation was paid for by Sahara.

Nazem Howa, the former Oakbay CEO, emailed Tony and Duduzane potential questions about his appointment, his relationship with the Guptas and mining sector.

‘We’re going to strike until Zuma steps down’

On the Dubai trip, Zwaneâ€™s spokesperson, Martin Madlala, said â€œengagements and road shows undertaken by the minister serve an important role of promoting mining in South Africa, as well as providing a platform to clarify policy and regulatory issues within the mining and minerals sectors.â€

Faith Muthambi, ex minister of communications, communicated with Tony Gupta on government policy before it was signed by the president.

One of such emails were sent to Tony Gupta in 2014 containing a proclamation transferring functions of the the Electronic Communications Act, the Sentech Act and the Broadband Infraco Act which were under other ministers to herself.

She basically reported back to Chawla on why Siyabonga Cwele, Telecommunications and Postal Service minister was â€œdeterminedâ€ to table the matter in cabinet on proposed amendments to broadcasting digital migration policy.

It turns out that Howa (the former Oakbay CEO) advised the ANC Youth League president on how he should respond to questions about the anti Gupta revolt within the ANC, state capture and even #FeesMustFall.

He was also instructed to praise the Guptas. He was told to say: â€œI’m celebrating how they have entered areas previously closed to anyone other than the pre-94 controllers of our economy.â€

Checklist: How to be ANCYL president in this ANC

These emails are the latest allegations in a long line of state capture. Last week, a group of academics and the South African Council of Churches released a report, Betray of the Promise: How South Africa is Being Stolen. It said SA had experienced a silent coup.

On Saturday, it was also reported that a motion of no confidence was tabled by the National Executive Committee of the ANC.Â

For more on the story: Check out the Sunday Times.