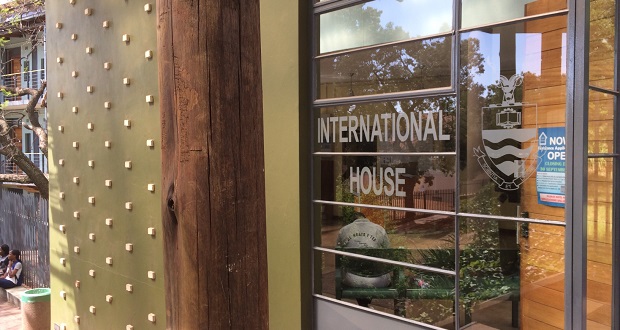 The #FeesMustFall protests taking place across universities for the past four weeks have put international students in a difficult position. The Daily Vox asked a couple of students at Wits International House how they feel about the protests.

Thabo Rutendo*, 24, student, Zimbabwe
[dropcap]”[/dropcap]I do support the protests, because I went to a private South African school. Of the people that finished in my stream, only five managed to go to tertiary facilities. Most of them, they actually passed, but because of finance they didn’t manage to get through.

Michael Tapiwa*, 26, student, Malawi/Zimbabwe
[dropcap]”[/dropcap]I’ve been trying to figure out if there is any other method they could have applied to have these protests. But I think with what they’ve trying over the years, this is almost the only option that they are left with. They’ve tried to deal with bureaucracy, to be diplomatic and you’d see that most of the student protesters have been on campus, have been involved with Wits for over eight years now, so they’ve seen the changes and the dynamic over the years. They understand that this is the only option that they have to deal with this.

I think what would happen to me is the same as what would happen to any international student. You’d have lost a year, financially and progressively in your own career. People would have to start answering questions of whether they’d be reimbursed of their monies and how that’s going to affect their schedules.

Remember most of international students are here on visas. That’s at the department of home affairs and immigrations discretion to give you that visa; it most likely means deportation [if a international student gets arrested] beyond the issue of suspension from the school. That’s what’s holding most international students back from actually actively participating in these protests. It’s because of that paper that allows you to be here.”

Ngoni Mufaro*, 29, student, Zimbabwe
[dropcap]”[/dropcap]As much as I support the cause and the demands of the students, this is kind of getting out of hand now. Since the government is taking a back seat and they don’t want to negotiate in good faith, they don’t want to actually sit down with the students and asses the situation. Which is slowly escalating into a national crisis.

I am an activist and I’m a political activist, back in Zimbabwe I’ve been a student activist as well. So I do understand where the students are coming from and that’s why I had to join.

Right now, most students who are international are being affected negatively through this. Some of them are being recalled by their institutions back home to their nations. Most international students here from Europe are exchange programme students. So they’d rather have them back and have them finish off their programmes in Europe. Which it is actually bad for the students.“

Sophie Danvers*, 21, student, Sweden
[dropcap]”[/dropcap]I understand that the need for free education, it would create a more equal community and society. That’s my idea, that’s how the country I come from works. They have very high taxes but it’s regulated so that taxes are higher for the people who have high income, so that’s up to 50% almost, which makes it possible. Also students pay for the surrounding things like accommodation, what you need for school, everything like that. So that’s what makes it work.

I have never seen protests like this before, but if I would have gone back to three weeks ago, I would have [taken part in the protests]. Now it’s a bit too much, I was just chased by rubber bullets.

I think several of us will be affected if everything gets postponed. I would have to redo this year in Sweden. Also if we were to participate, some of us have scholarships, some have bursaries, some have other people paying for them. And maybe some people could lose it.“

Bontle Kgotso*, 26, Lesotho
[dropcap]”[/dropcap]At first I kind of supported them, but now I feel like it’s just a waste of time, honestly, because some of us need to graduate and we’re on bursaries. Our bursaries pay for us up until a certain day, so they’ll prolong things and we don’t even know whether the university is going to cover those costs or not. So right now I feel like it’s a waste of time.

As an economics student, I don’t feel like what he’s [Blade Nzimande] doing is for the benefit of everybody. I think he is not looking at it, he doesn’t have the bigger picture of this thing. But I also feel like students, to a certain extent, are being unfair. Because I feel like with this free education movement, they are trying to compare themselves with countries like Germany, Sweden, European countries.

I’m from Lesotho. Lesotho is landlocked by South Africa. You will not believe the extremes, like the length you have to go through just to get a South African permit, yet I’m inside South Africa. But it took me three months this year to get a study visa. So I can only imagine what it’s going to be like next year if I have to come back and study. It’s another process again, it’s another process, and paperwork is not nice.“

Â Bupe Busiku*, student ,24, Zambia
[dropcap]”[/dropcap]It’s actually a very delicate situation at the moment. I think there’s a lot that actually needs to be done or addressed. I feel like the students are not necessarily voicing out their grievances to the right people. They’ve been addressing or directing the questions towards Adam Habib, which is a good thing to do, but I think that maybe there should be more government involvement.

Iif you are arrested and your fingerprints are taken by the policemen, there’s a likelihood that I might not come back to South Africa because I won’t be able to attain a police clearance. So it actually has high implications for me and that one of the main reasons why I’m not taking part this year, because there have been a lot of arrests made of students.

I feel like the protests themselves are quite good. It’s good that people are fighting for their rights to free education. However, I feel like maybe the manner in which they are being executed, it should be more interactive. There should be a compromise to both ends – not just management listening to students, but students should also at least listen to what the management is saying.“

Lamar Philippe*, 25, student, CÃ´te dâ€™lvoire
[dropcap]”[/dropcap]To be honest, I don’t support any of the protesters actually, because I think they are just violent and I think they do not have any respect for authority. They have spoken to those responsible for the university and from my opinion they already reached an agreement. So they just have to wait until next year and see what will happen.

Most of us have a study permit, so we have to renew our study permit according to the university terms. Actually I’m a Â PG [postgraduate] student, so I need to extend my stay in South Africa one year more. But I wouldn’t be able to do that if I did not finish my academic year. If it keeps going, we have to go back to our country.

Most of us just left our country in order to get a better tertiary education and I think South Africa is amongst the best countries in the world.Â I did have these types of protests back at home, that is one of the reasons why I left my country to study here. Because I was looking for a peaceful area in order to study quietly.“