Home Online Chatter What the hell is going on with AKA, Bonang and DJ Zinhle?
WhatsApp
Facebook
Twitter
Email
Print 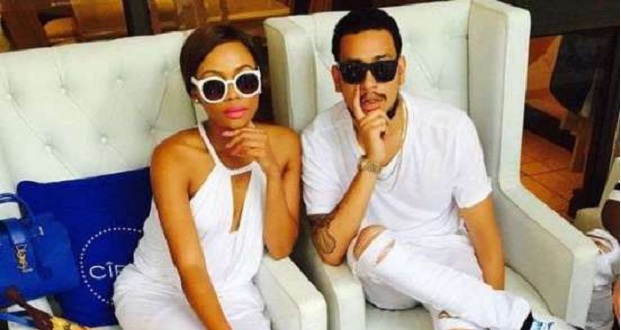 Over the weekend,Bonang Matheba, AKA and DJ Zinhle took a step back into social media notoriety. The trio had been involved in a love triangle last year, when DJ Zinhle accused AKA of having an affair with Bonang. They have since made it back into the headlines after DJ Zinhle posted a pic of herself wearing a #Nonke shirt, made by Bonang’s ex, DJ Euphonik. Confused? DANA DA SILVA rounds up what the hell is going on.

If youâ€™ve been following the recent Twitter rants involving DJ Zinhle, Bonang Matheba and AKA then youâ€™ve probably asked yourself why they’re in the news again. Whatâ€™s it about this time? Who is throwing shade at whom? To answer these questions, we must first go back to the beginning.

Once upon a time, DJ Zinhle and rapper AKA were a couple and seemed happy when they revealed that she was pregnant last year. But then DJ Zinhle revealed that Bonang Matheba, television host and radio personality, was involved in a five-month long affair with AKA, which later led to their breakup.

A year later, just when we thought we wouldn’t be hearing from them (and we at The Daily Vox had very much gotten over them), fresh dirty laundry started getting aired on Twitter. On May 26th, DJ Zinhle tweeted a picture of herself wearing Euphonikâ€™s #Nonke T-shirt, which clearly irked AKA.

So how did a shirt start the beef? Well, it went into production by Euphonik after he responded to tweets which said that he wanted his ex, Bonang, back. “#Nonke, Chapter 1: Verse 7” refers to Euphonik’s seven tweets, where he slut-shamed Bonang, claimed she was mentally unstable and told people that he was the one who broke up with her and he didnâ€™t want her back.

Bonang and Euphonik’s relationship wasn’t without drama, as she laid charges of abuse against him back in 2012. (We haven’t forgotten how the Department of Women trolled Bonang for withdrawing those charges, though).

After seeing DJ Zinhle’s tweet, AKA went on his own Twitter tirade about the shirt, DJ Zinhle, and his own mother. He defended Bonang, who was apparently almost sabotaged by DJ Zinhle, and lamented the fact that Zinhle has a better relationship with his mom than he does. He accused Zinhle of being a bad mother and tweeted that Euphonik is using Zinhle for more likes and that she is throwing shade at him.

They called B* a whore for nearly a year now … Every single day. Not once has she spoken out. THAT is strength. THAT is grace.

Believe me when I say that I DO NOT HATE Bonang, she saved me.

She is beautiful & she is very kind to be dating a fan… Bless her!

Tweeps quickly got bored of AKA’s ranting, and responded with the hashtag #ThatIsStrengthThatIsGrace, which mocked the whole situation and delivered some truth all at the same time.

Fight your personal battles in private with the people who are hurting you and not your followers. #ThatIsStrengthThatIsGrace

All the while Bonang hasnâ€™t said a peep about all this. Can we blame her, though? Looks like AKA, DJ Zinhle and Euphonik have all saying plenty.

We pray for the strength and grace to get past all the drama.