Home Israeli Apartheid Week Hell no: The Blitzbokke should not be training with an Israeli rugby...
WhatsApp
Facebook
Twitter
Email
Print 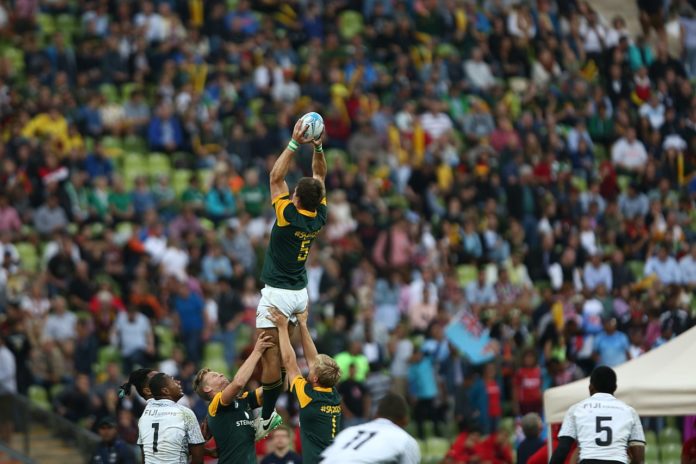 The Israeli 7s rugby team is set to join a training camp with the Blitzbokke in Stellenbosch. When exactly this is supposed to happen, we’re not sure. But it’s worth noting that then the announcement was made last month, there was minimal outrage and backlash, save for a few comments on a Facebook announcement that has since been removed.

We have been plunged into a pandemic that amplified issues like gender-based violence and poverty in South Africa. Many of us would say who cares about a rugby team travelling to South Africa. Rightfully so, and also not. South Africa will forever be scarred by the effects of Apartheid; we live these truths each day. The spatial planning forced onto Black, Coloured and Indian South Africans by the Apart HATE government, mirrors Israel. Israel is an Apartheid state.

Apartheid South Africa was sanctioned by international sporting bodies from competing at sport events. Black and Brown sportspeople were barred from playing for South African teams on any level. Many opted to leave South Africa to play for and in other countries. Basil D’Oliveira a Coloured man was one of the most notable cricketing talents to leave South Africa – he ended up playing test cricket for England. In the late 60s he was excluded from an English tour to South Africa. Many believe this was politically motivated and not the reason of merit that was given. The point is D’Oliveira and so many South African athletes were barred from having great careers as South African athletes because of a segregationist Apartheid government. The irony is so stark with having an Israeli 7s rugby squad set up camp in South Africa for training. Israel has hardly suffered any blockages from world governments to compete in sports competitions. They have had no sanctions imposed on their trade in any significant way. Yet here they are being welcomed into a post-democratic South Africa.

South Africa and Israel have had a downgraded relationship since 2018 by not replacing the South African Ambassador to Israel in Tel-Aviv. There is no political, trade or commercial mandate with Israel, except for the issuing of visas. There has not been a complete cut in ties with Israel, but the ruling ANC party has always stood with the people of Palestine in their struggle – Or at least, they continue to claim they do.

While the ANC Youth League has condemned the tour in recent statements, the normalisation of Israeli participation in world sport is concerning. The South African government needs to take a direct stance with Israel. This is not a grey area. Choose a side, be it with the oppressor or the oppressed. There are no conditions attached to something as absolute as freedom. Being neutral throughout history has shown us how the most deplorable laws flourished. Exercising “diplomacy” in a time where people are being fatally hurt is not ok. Sitting on the fence with freedom is a cop-out.

The Israeli 7s rugby team slipped through the cracks during one of most trying times in South Africa. We are battling GBV, poverty and extremely high unemployment rates. The upcoming tour is hypocritical and grossly negligent. Allowing the tour sends the message of support to a state that continues to violate international human rights law.