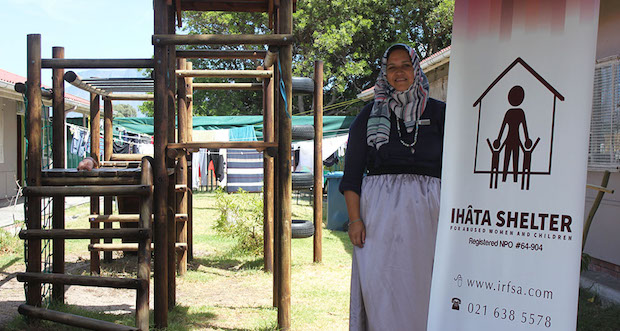 In the once gang-riddled community of Heideveld on the Cape Flats, Ihata Shelter is helping women whoâ€™ve suffered domestic abuse piece their lives back together. Nuraan Osman, the director of the shelter, spoke to RAâ€™EESA PATHER about the women and the men who abused them.

Our central theme in the shelter is love. It is home to 20 women and their 31 children. The women are mostly impoverished. Mostly they are from the Cape Flats, and between the ages of 18 to 35. That breaks my heart, because they are the youth of our community, the energy of our country, and they are sitting in shelters like this one.

Many of them have been violated as children; theyâ€™ve witnessed some kind of sexual assault or molestation. Some of them become promiscuous as teenagers because of this and by the time theyâ€™re adults, the only partners they choose are the ones who create the same kind of emotional and physical pain. Some of them believe that their partners beat them because they love them.

We want to help them rewrite the script in their heads that says, â€œIâ€™m not good enough for a healthy relationship.â€

I counsel perpetrators too, but the majority of these men donâ€™t want help. They believe that they are right and they own these women, and they will beat these women.

Those who want help progress quite nicely. Many of them were violated as children or were insulted and humiliated. Itâ€™s important to give them a genuine sense of self-worth, because when they start believing in themselves they have no need to violate or harm someone.

Weâ€™re not going to heal society by throwing perpetrators in jail. Some of them are abusive and they should go to jail, but even in jail they should be rebuilt to be healthy human beings, because they still have to come out of jail and rejoin society.

I had an incident where a residentâ€™s husband had been in jail for 20 years for murder. When he was released he came here with a gun because he believed she had testified against him. He would spend a lot of time outside the fence and our housemother would call the police all the time. One day, I just decided it was enough. I had done a course in non-violent communication, and I went up to the gate, introduced myself, shook his hand, and said, â€œHow may I help you?â€

We sat on the sidewalk for the rest of the afternoon and he just cried. I had a few counselling sessions with him. They got divorced, and she moved on with her life, but I think he was healthier. He stopped chasing after her.

For more information on the Ihata Shelter, or to make a financial, in-kind, or time donation, visit their website.