Home Features Here is why we all need to calm the f*** down about...
WhatsApp
Facebook
Twitter
Email
Print 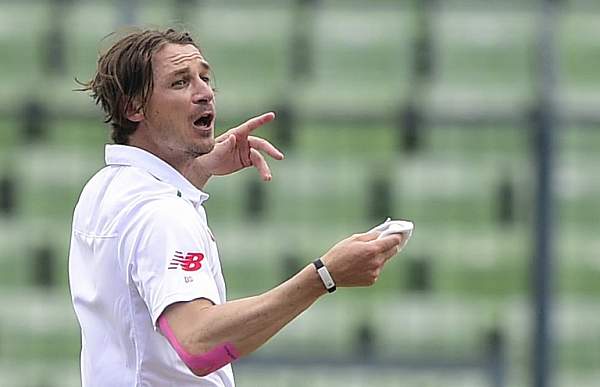 So the boys lost the first test against England in Durban. Truth be told, they were thrashed by the Poms. And before this series, they caught a hiding in India. Now, we understand you are all upset.

Given our proud history of losing like champions, our egos are hurt by losing so badly. And everyone is losing their marbles; demands for Amla’s head and the resignation of Russell Domingo.Â In the areas of the country that are not yet uhuru, transformation is faulted, and even President Jacob Zuma is not safe from the blame for a dismal batting display.

But we’ve got to calm down.Â Here’s why:

Our man Amla is in the middle of two dilemmas. The worst form of his life, and captaining a team in the midst of a transition. Batting is kind of like riding a bicycle; Amla knows what to do, itâ€™s just a case of finding the self-belief that he can indeed swivel that blade. It’s only a matter of time before he whirls like an unassailable dervish.

It’s the first time since rejoining the team that Amla has been in such a bad slump. And we are talking about 10 years, and 6900 runs in test matches. Oh, and he still has the best beard in the business. Have some faith, oh ye of fickleness.

On the make-up of the team

Let’s get a few things out of the way. The team looks confused and a bit silly. But that’s precisely what a team in transition looks like. There’s no Boucher-Smith-Kallis cabal like there used to be. There is not even a Herschelle Gibbs smoking weed in a gulley in Barbados. This team is unrecognisable. We have a spinner named Dane Piedt, for Pete’s sake. Jesus, take it easy on the boys.

The new blokes are finding their way against an English team that conversely is reaching its prime. Let’s be frank: they can’t get better than this, while we know we can be a whole lot better. Now we understand there are questions of transformation and what not. That is okay. Field the best 11, including four of the best players of colour. At least four. It is the only way to get selectors and coaches in the youth and provincial structures to take transformation seriously. Letâ€™s be clear about this, transformation is not a hindrance to excellence. A cohesive process of transformation will make the sport more inclusive and it will pave the way for the next generation of new Makhaya Ntinis and Hashim Amlas.

On cricket being the great leveler

Test cricket is a rigorous test of character, mental strength and physical prowess over five days. There is nothing as ridiculous in world sport. Test cricket is, at its heart, an English game. In other words: “colonise half the world, but don’t get too ahead of yourself”. So we reached the summit of the sport, became the number-one ranked team, but we forget what a fine line there is between winning and being, well, annihilated in cricket. For instance, in the first innings we had England at 49/3, then when they were beginning to recover, we dropped two catches, allowing them to go on to score 300. Had we taken those catches, the game might have been very, very different. The confidence might have returned and England may have perished under our rise. Instead, the Poms thrived and we withered away. Â The game can change in an instant and our boys know it.

Please get your shit together. Some years ago, if you had forced AB de Villiers to play keeper, we would have all understood. But at this stage, when he is our premier batsman, you surely cannot ask him to perform the grueling role. It’s not sustainable, and illogical if you want to build a new team. Also, how many chances are you willing to afford JP Duminy? He is talented, yes, but so too was Mark Ramprakash. He is not performing and has to go. JP has become the new Jacques Rudolph – floating in the team, scoring big against weak opponents and wholly incapable of shepherding the tail. At number six, you need a Dhoni or a Hussey. Please make the tough decisions.