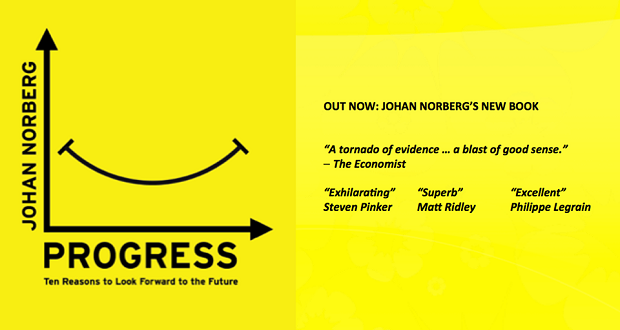 Ask anyone what they thought of 2016 and get ready to hear how 2016 showed them flames. But Swedish economic historian and writer, Johan Norberg says it had some bright spots. Norberg wrote a book called Progress: Ten Reasons to Look Forward to the Future, using data to tell the story of how far weâ€™ve come in the year 2016. From decreased gender pay gaps to access to clean drinking water, it seems that 2016 was not too terrible after all. Here are ten signs of progress that we made this year, based on the chapters in Norbergâ€™s book.

Food supply is at an all-time high worldwide. Data shows that even on the African continent, people consume more than the 2,000 calorie per person each day recommended by the United States Department of Agriculture. In fact, famine, which was once a global issue, is now an exception affecting only a small part of the world.

Global net food production increased by 121% between 1961 and 2013. Check out the progress here: https://t.co/JRqd2tfka3 pic.twitter.com/74ATX6oaDS

Access to modern sanitation has tripled in the last 30 years. Around 75% of the global population has access to improved sanitation like flushing toilets, septic tanks, functional sewerage systems and clean and safe drinking water. This is significant because unhygienic disposal of human waste has been a chief cause of sickness in developing countries.

In 1981, only half of the population could access safe drinking water. Today, over 91% of the population have access. This means that an average of 285, 000 people have gained access to clean and safe water every day for the last 25 years!

8: Every day for the last 25 years, another 285,000 people got access to safe water. #progressadventcalendar

How the world changed in 25 years. pic.twitter.com/pJgP8vJa8v

Extreme poverty has decreased from 37% since 1991, when the Cold War ended, to 9.6% today – and is in single digits for the first time in human history. Extreme poverty is defined as living beneath an international poverty line of US $1.90 a day (based on the US dollar exchange rate of 2011), according to the World Bank.

According to data, nine in ten Chinese people lived in extreme poverty in 1981. Today, only one in ten does.

1: In the 24 days until Christmas, 3.3 million people will be lifted out of extreme poverty. #progressadventcalendar pic.twitter.com/yfuygJOrxt

4. Global GDP per capita has increased as much in the last 30 years as it did during the previous 30,000 years. #progressadventcalendar

Global violence is declining, both in homicide and war casualties. This is probably the most most peaceful time to be alive recorded in history.Â The world is preoccupied with â€œradical Islamic terror attacksâ€ but these attacks kill comparatively few people. In Europe, Europeans are 30 times more likely to be killed by an “ordinary” murderer. In fact, the European murder rate has halved in the past two decades.

Though a majority of voters said crime has worsened since 2008, crime statistics paint a different picture. https://t.co/rSKAMKsMQw pic.twitter.com/lhDKbQwZW8

Environmentally, we pollute much less despite being a growing population with a larger economic output. As the world has steadily become richer, we have become cleaner and greener, according to Norberg. Forests are thriving and technology is aiding to alleviate the symptoms of global warming.

In the 1800s, politician and writer, Benjamin Disraeli , once described the Thames River in LondonÂ as “a Stygian pool reeking with ineffable and intolerable horrors”. Even as late as 1957, the river was considered biologically dead. Today, a number of species of fish can be found in the river which is considered healthy.

10: The oil spilt in our oceans has been reduced by 99% since 1970. #progressadventcalendar (you got 11 yesterday, sorry)

In the past, literacy was preserved for an elite few but today it is widespread. Global literacy has improved to 85% where it was 20%. Better still, the literacy gap between males and females is declining. The international female literacy rate of those between the ages 15 and 24 is almost 96% of the male rate.

6. Since 1820, global illiteracy has been reduced from 88 to 14%. #progressadventcalendar pic.twitter.com/j2BvQQvmdy

According to Norberg, democracy and economic freedom have been improving steadily. A proclaimed fan of capitalism, Norberg previously wrote the book In Defence of Global Capitalism, where he promoted free trade and globalisation arguing that capitalism has steadily decreased poverty rates and increased opportunities for people globally. Norberg cites free markets and democracy for the progress we are experiencing as a human race today.

In his book, Norberg defines equality based mainly on three factors: gender, sexual orientation and race. According to data, the gender pay gap is becoming smaller in wealthier countries, equality for queer people is increasing in developing countries and racial segregationist attitudes are almost non-existent.

9: When asked about womenâ€™s rights and duties, American men today are more feminist than women were in the 1970s. #progressadventcalendar

3. Share of Americans who approve of marriages between blacks and whites increased from 4% to 87% since 1959. #progressadventcalendar pic.twitter.com/ZcZTotFTD4

10. The conditions of childhood

Lastly, Norberg writes that infant mortality has decreased and children are much less likely to be subjected to child labour. In the 21st century, child labour decreased to 10.6% from 16%.

The global infant mortality rate has fallen by more than 25% since 2008. Check out the progress here: https://t.co/lfs9E8zjHC #health pic.twitter.com/mYfHT1C34J

According to the author, we are living in a â€œgolden ageâ€ and are only so preoccupied with the bad news because of modern media which reports on tragedy so often. We fail to see that the pace of human progress means that people’s lives are improving everyday all over the world. While we still have a long way to go to make life better for all, it’s always good to stop for a second and celebrate the progress that we’ve made until now.