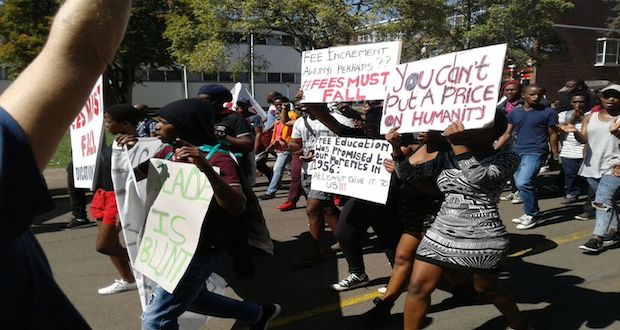 While the academic programme at Tuks has not been hindered, the SRC election was disrupted by protesters on Tuesday.

Students at #UP have drafted a memorandum of demands, not yet clear who it is addressed to or if it will be delivered. #FeesMustFall2016 pic.twitter.com/v3t6WlxoAW

Classes resumed on Tuesday at all campuses of UKZN following a decision by management to bring the spring recess forward by a week. And that decision came in the wake of protests against rising fees.

Students returned to class but activists not aligned to the SRC, and under the banner of Fees Must Fall, have threatened to shut down the university on Wednesday. In the meanwhile, students from the Pietermaritzburg campus marched to the provincial legislature, whey they handed over a memorandum. In it, they reject the fee increment and demand: free education and the scrapping of historical debt, intervention into police brutality and justice for survivors of sexual assault, that all private security be withdrawn from the university, free sanitary pads, and the support of the provincial government for free education.

#UKZN #PMB Students have arrived at the KZN provincial legislature and are chanting outside #FeesMustFall2016 pic.twitter.com/WyfG1OhXoT

But it wasn’t all unified though.

On their return to campus, clashes broke out between the SRC and students aligned to EFF.

The campus has been shut down.

We received this update from Thomas Kolathu:
â€œA group of students personally visited the gates and closed them this morning. A mass meeting was convened and there were a few scuffles between the students aligned with the EFF and the SRC president.

The collective was trying to decide on two possible options:

1) fight the varsity on the 0% increment and use that to put pressure on government for free education, or

2) Have an indefinite shutdown till government is forced to intervene.

The SRC also plans on engaging government and the corporate sector directly.â€

“The situation is also a bit tense with about 30 students protesting on the campus.”

Protests were reported at the Mafikeng campus prompting the university to warn students that an interdict is still in place.

On Tuesday, the Nelson Mandela Metropolitan University (NMMU) campus was shut down. Our correspondent Sikelela Matandela said students feel their demands for free education had been misconstrued.

On Tuesday, the university sent out an email suspending university business on for Wednesday and Thursday to “Allow management to actively engage with students”. Student leadership held a mass meeting with the students to consolidate a way forward. The leadership plans to meet with management on Wednesday where they will submit a memorandum of demands and await response on whether or not the management will support their cause.

Thandeka Tshabalala, deputy provincial secretary of SASCO in the Eastern Cape, has had enough of Minister Nzimandeâ€™s evading the pronouncement of free education.

â€œWe have backed the government enough, we have voted for the ANC. Now we want what is ours and ours is free education.â€

Azola Mboniswa, DASO Institutional chairperson of NMMU, says that Nzimande is turning students and universities against each other.

Zane Mncam, Economic Freedom Fighters (EFF) Student Command Chairperson of South Campus, is prepared to strike for as long as there is solidarity in the cause for free education.

â€œWe should understand that in each and every struggle, there needs to be compromise. And if it means that we not go to class for a day or a week or a month or even a year then thatâ€™s what it takes.â€