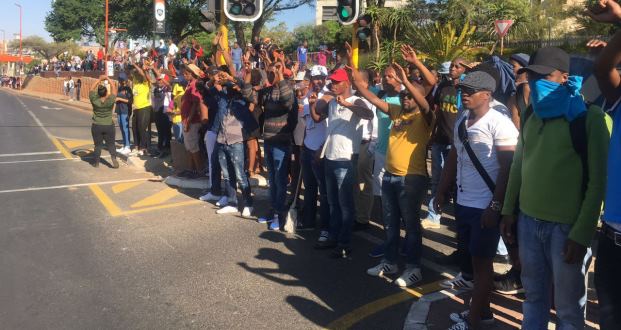 In the second week of the 2016 re-emergence of the Fees Must Fall campaign, we saw shutdowns, clashes with private security and just about everyone else, arrests, court hearings and even a controversial poll.

Wits was shut down for a second week. On Monday, it was revealed that a worker who worked in the Witsâ€™ Jubilee Residence had diedÂ after complications when a fire extinguisher was set off by protesters the previous week.

Students meanwhile held meetings and marches both on campus and off campus, as held a candlelight vigil for the worker, Celumusa Ntuli. Notably. The protest was continued with a march to the Chamber of Mines to hand over a memorandum calling for support of free education.

On Thursday, the university released the controversial #WitsPoll to gauge whether students and academic staff want to resume the academic programme on Monday or not.Â The students had to answer an SMS anonymously with whether they want to resume the academic programme with appropriate security measures or not. Academics had to vote by following a link sent to their email addresses.

Some of the responses to #WitsPoll that we’ve seen. pic.twitter.com/hEqRNazlTb

This is how Wits voted:

Wits is expected to make announcement about the resumption of the academic programme over the weekend. In the meanwhile, tensions among students continue to fester.

UCT remains shut down until Sunday 2nd October. #ShackvilleTRCÂ  hostedÂ regular political education lectures this week relating to decolonial thought and free education. There was to be a meeting with UCT management and #ShackvilleTRC on Friday to move towards appointing a mediator and resolve a way forward.

Students calling for the university to open on Monday held a silent protest at midday on Friday. A group of protestors in support of the shutdown stood in front of them, singing and giving speeches.

Amid protests, clashes with security and police, and the burning of a residence, UL shut down indefinitely on Wednesday and students were instructed to vacate residences by 5pm that day. Six students were arrested but were later released.

After calling for donations on Wednesday, three taxis arrived on Friday to take a group of stranded students from Mpumalanga home.

These are students from Mpumalanga about to head home. We’re very thankful. #ULShutDown pic.twitter.com/90QeNcYSgR

The academic programme continues at UCKAR. The 11 arrested students from Wednesday who made headlines after footage was released of their forceful treatment by SAPS, appeared in court on Friday.

Only the 6 that were arrested at the Drodsty Lawns are being heard now.. the rest are sent outside #UCKAR11 pic.twitter.com/xnYZPCf79k

The students were released on free bail, with the charges against one student dropped. One of the bail conditions was that they have to report to the police station fortnightly. They will appear in court again on the 30th November.

Students hosted a press conference to address the various issues they faced this week.

DUT was officially shut down this week.

On Wednesday, the SRC met the Department of Higher Education, NSFAS, SAUS and DUT management at Coastlands Hotel to discuss a way forward. Students were dissatisfied by the outcome of the meeting and demonstrated outside the hotel. They were dispersed by police with teargas. SRC president, Zama Mncube, said the strike will continue and DUT will remain closed until their demands of free education are met. However, Sascoâ€™s Tuta said they want to return to class.

Two students were arrested on Tuesday on charges of illegal gathering, inciting violenceâ€š obstructing trafficâ€š possession of explosives and for being a public nuisance; and public violenceâ€š convening an illegal meeting and failing to obey police instruction respectively. The two appeared at court appearance on Thursday but were denied bail. Both students will be held at Westville Prison until their next court appearance.
University of Kwa-Zulu Natal (UKZN)

On the Pietermaritzburg campus, the entrance to the William Oâ€™Brien residence was set alight on Monday.

#UKZN – #Fees2017 This is what remains of entrance hall of William O’Brien Res @News24 pic.twitter.com/7p7glzRMHd

Meanwhile, the 11 students arrested last week for protest related action appeared in court on Friday for their bail application.

Strong police presence at PMB mag court where 11 UKZN students are set to appear for their bail application. #UKZN #FeesMustFall

Magistrate Boikhutso denied the bail application and has postponed the hearing until the 10th of October.

11 students from #ukzn were denied bail and they’re kept in custody until the 10th of October, kubi!! #feesmustfal

Classes continued this week until lectures were disrupted and students were pulled out of class at Westville campus on Friday afternoon. Police fired stun grenades and rubber bullets to disperse students. A News24 journalist was also arrested for trespassing but later released.

Six more students have been arrested and taken to Westville police station.

NMMU has been shut down indefinitely.

On Monday, a response to the memorandum of demands presented to management the previous week was rejected by students who decided to disrupt academic activity until free education is realised. Academics under the banner of â€œNMMU concerned Staffâ€ joined and pledged their solidarity to the movement.

On Thursday, there was also a march to Newspaper House where The Herald offices are located. FMF leadership handed over a memorandum of demands.

AÂ mass meeting is scheduled to be held on Saturday.

The University of Johannesburg remained open despite protest action and the torching of an auditorium. UJ was in the spotlight this week after academics, students and journalists had violent encounters with the private security.

Private security attack students and police. Pepper sprayed me in the eyes for recording them #UJ campus pic.twitter.com/pjwEgESa8H

Video emerged of a student being dragged by private security at #UJ today. #FeesMustFall @IOL pic.twitter.com/66uDfvO9dM

In a meeting with journalists on Thursday, UJâ€™s Vice Chancellor, Ihron Rensburg, admitted that private security overstepped their boundaries on Wednesday. â€œIâ€™ve asked that my head of security engage with the private security company and make it absolutely clear that this sort of conduct is unacceptable and we will not have it at the University of Johannesburg. If anything like this happens at all theyâ€™re gone off the university,â€ he said.

On Thursday afternoon, a lecture room at the Bunting Road campus was set aflame. No one was injured. Officials reported that a projector, a screen and the roof of the room have been damaged. According to management, this forces UJ to bolster private security despite their alleged brutality.

Investigations into the events that transpired at the University are currently underway.

On Monday, the university suspended all academic activities and brought recess forward until the 7th of October. Classes are set the 10th of October.

On Tuesday, the Free Education Movement (FEM) received a response from management accepting the movementâ€™s social compact of a â€œprotest guided by the principles on non-violenceâ€. Students convened a meeting in the evening to decide on a way forward.

UP is officially shut down. The university has brought the term recess forward and will reopen on the 10th of October. This week, the students have been taking part in various meetings and dialogues. Notably, on Wednesday the University of Pretoria Fees Must Fall (UPFMF) collective called a meeting to discuss a way forward where Tinyiko Maluleke, advisor to the VC, was present. Not much came from the dialogue, which just served to reiterate the demands of the students.

All campuses were shut down on Monday. Students burned tyres at the entrance of the main campus and barricaded the gates at other campuses including Arcadia and Soshanguve.

On Tuesday, management announced it would bring its recess forward and campus is set to reopen on the 10th of October.

The academic programme at Stellenbosch has continued as usual this week.

Stellenbosch continues as is… #SFMFDefianceCampaign

Classes continued as usual throughout the week.

On Friday, students agreed to have a meeting on campus to mobilise and decide on a way forward.

On Thursday, students committed to staying in their res rooms despite the university management ordering them to vacate the campus. This forced the university to shut down until its council meeting on 10 of October. http://www.dispatchlive.co.za/news/2016/09/30/fort-hare-students-refuse-vacate-campus/

In a letter addressed to students, SRC president, Luxolo Nqala, wrote that student representatives from East London and Alice campus vow to keep everyone safe from police brutality to ensure that no one evicted.

â€œWe urge students to stay in their respective rooms so that we ensure their safety,â€ wrote Nqala