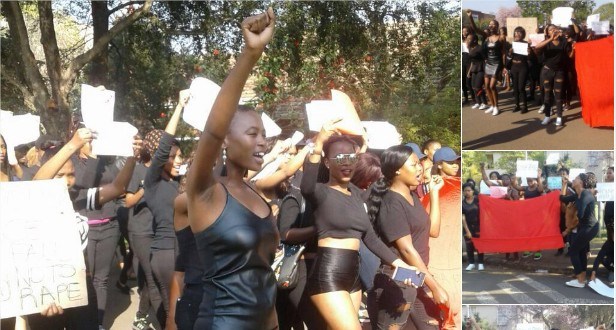 This week, the country sat up and took notice of the protests, arson and sexual assault allegations that came out of three UKZN campuses. But these protests didn’t fire up overnight, there is plenty of background to what’s been going on. So The Daily Vox team rounded up everything we know, for you.

1. The lay of the land: UKZN is spread over five campuses
The first thing you need to understand is that UKZN spans over five campuses. These are the Edgewood Campus, Howard College Campus, the Medical School, the Pietermaritzburg Campus and the Westville Campus.

The campuses that have been involved in the protest action are Howard College, Pietermaritzburg and Westville.

2. The protests have BEEN going on
UKZN was first shut down mid-August, which is three weeks ago.

The DA is crying foul of campus shut downs

Unfortunately, it took things being set alight for the country to sit up and pay attention.

We feel hurt for torched buildings & burnt books. But black students who are beaten, even raped, they must have deserved it, right? #UKZN

The protests are over a number of issues like fee increments for the next academic year, the state of residences, studentsâ€™ safety and political differences between conflicting student groups. Students have raised complaints that the SRC is not represented in the executive committee management – the highest decision-making body at the university.

Some issues raised in a memorandum compiled by the Pietermaritzburg campus are rejection of the new NSFAS system, rejection of the proposed fee increment and the writing off of all student debt.

Earlier this week, the department of Higher Education announced that universities will be allowed to determine their own fee increments.Â This does not bode well for future protest action.

UKZN shut down continues, while EFF at DUT call for campus to be suspended

Things began burning two weeks after the campuses were shut down and no sincere attempts were made by management to address the students concerns.

4. A student was allegedly raped
UKZN lecturer, Pumelela Nqelenga, told the Daily Vox on Tuesday that a student had been raped by a SAPS officer in or around her residence in Pietermaritzburg on Monday night. Apparently, she had first been sexually assaulted while she was being removed from her residence and was later raped.Â

There are however conflicting accounts about whether a charge has been formally laid.

Lieutenant Colonel Thulani Zwane of the SAPS told the Daily Vox that enquiries were personally investigated by the station commander at Alexandra Road police station, but he could not find the alleged victim. The police appealed to the victim to come forward and open a case so that the allegation can be investigated.

Siphelele Nguse, SRC President of UKZN Pietermaritzburg campus, said that the survivor of the assault by a police officer from Alexandra Police Station had opened a case at the same police station and had already filed the relevant forms. In a media statement issued on Tuesday, UKZN confirmed that a report of sexual assault by a SAPS officer had been made.

â€œA student on the Pietermaritzburg campus has reported a case of sexual assault by a SAPS officer. The alleged incident is reported to have happened off campus. The incident is under investigation,â€ said UKZN spokesperson, Lesiba Seshoka.

However on Wednesday, speaking to eNCA, Seshoka seemingly backtracked and rejected reports of the alleged rape.

“That is totally not true, we know for a fact,” he told eNCA. “There has been a reported case of sexual assault which took place off campus. The person that has, claims that itâ€™s one of our students, and as such we are an interested party.

“We are following up on the case to check exactly what transpired,” Seshoka added.

The university community in Pietermaritzburg gathered in solidarity with the survivor.

â€œCurrently, we are mobilising students to go to Alexandra police station because we want the officials of Alexandra Police Station to report to us as to how they are going to be moving forward with the fact that one of their officers is a rapist,â€ said Nguse.

At #UKZN PMB this morning female students are marching to the police station in solidarity with the raped student. pic.twitter.com/iNOkCqWjwN

#UKZN PMB protestor: “We will wait for the man who did it, who is among us right now, to be arrested” pic.twitter.com/5hWWiuwAz3

The #UKZN PMB students protested against rape and police violence today. There demands are: pic.twitter.com/3BlNpq2Ola

5.Â There’s been plenty of damage to propertyÂ
Last week, a coffee shop was burnt down at the Howard College Campus and an exam hall was burnt down in Pietermaritzburg. In an incident that has caused the greatest uproar, a library was scorched at the Howard College Campus late on Tuesday afternoon.

When we prioritise books over people, we only create new symbols of oppression

And in the latest report, a mattress was lit aflame at a residence on the Howard College Campus on Tuesday evening. The students of the residence had to be immediately evacuated but no one was injured.

6. The Popo are not students’ friends
Although it feels like this goes without saying, especially considering #4, the police and security brutality on campus has been particularly distressing. The forces that have been deployed on campus are three-part. Thereâ€™s the University Risk Management Services (RMS), Mi7 which is a private security company hired by the university, and lastly, thereâ€™s our beloved South African Police Services (SAPS).Â Â

At campuses like UKZN PMB, violence is used to force students into submission

The police have not fulfilled their duty to protect the students. Tear gas and rubber bullets have been used to disperse protesting students.

A number of students have been injured by the rubber bullets, like Bongeka Mntaka.Â

At the UKZN Westville campus, students allege that heavily armed private security and SAPS officers stormed and victimised students in their residences on Monday night. They pointed guns at students and searched their rooms.

“I was violated, yes, but this is UKZN and we are used to this”

There have also been reports of brutal assault and swearing by the police.Â

Student Thando Maseko has just been arrested. He says he is innocent. Accused of stoning. #UKZN @DailyNewsSA @iol pic.twitter.com/FbveDrVAD9

7. Arrests have been made
According to Seshoka, a number of students suspected of illegal and destructive activity have been apprehended by the police.

Twenty-four students from UKZN Westville campus appeared in the Pinetown magistrates court today.Â One of the arrested students is UKZN Central SRC president, Senzo Ngidi. A number of students went to court in solidarity with detained protesters.

â€œThe court hearing is today but we are not sure what time they are appearing, so weâ€™re just waiting outside. As soon as they appear, weâ€™ll go inside and whenever they get the bail, weâ€™ll pay for it and make our way back to campus,â€ said Ntshobeni Philani, Secretary General of Westville campus SRC this morning.

Magistrate has set bail at R1000 each and issued warnings the the 24 #UKZN students. That’s R24 000 for all to go to res @DailyNewsSA @IOL

8. UKZN still has a listening problem
According to a media statement issued by the very busy UKZN spokesperson, the September recess has been brought forward and the academic programme is scheduled to resume on the 20th of September.

UKZN has also obtainedÂ a high court interdict to protect the university against â€œunlawful protests, disruptive gatherings, demonstrations, mass action, intimidation or any violent act to persons or property at the entrance and premises of University campuses.â€

Seshoka further urged students to follow established protocols and to raise concerns with their Student Representative Council (SRC) representatives. This is despite the fact that students have been complaining that management is â€œarrogantâ€ and have not provided feedback or responded to the proposed memorandums.

A Council meeting has been scheduled for the 19th of September, where the SRC will be allowed to air their grievances. The University feels that some of the issues being raised by student representatives fall beyond the ambit of management.

9. Meanwhile, UKZN is up to its ears in debt
In 2014, Minister of Higher Education and Training, Blade Nzimande said that UKZN had accumulated a deficit of almost R2-billion at the end of the 2012/3 financial year.

In response to a parliamentary question last month, Nzimande said that UKZN is one of theÂ 16 out of 26 South African universities that are projected to face a deficit over the next financial year.

Nzimande maintains that the free education is not sustainable for South Africa.

A decision has not yet been taken over whether UKZN will increase its tuition fees for 2017. The decision is set to be finalised by November.

If anything, the events at UKZN prove that the call for free education will not be hushed.