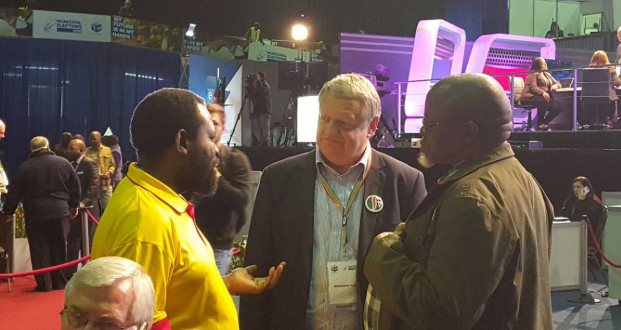 What is a coalition anyway?

A coalition is essentially an arrangement between political parties to share power when there is no outright winner. So where no political party has received more than 50% of the vote in a municipal election, a coalition must be formed. They are usually formed to ensure stability in a municipality or region, but in this year’s local elections they are even more interesting, especially because we may see coalitions between historical adversaries and ideological opponents. But, these coalitions might not be as stable as intended. But why is it even necessary? Surely the party with the most votes can just rule?

Where no party wins an outright majority of council seats, and no coalition is formed, the council could be a hotbed of chaos. And key decisions could be dragged through the squabbling of council. Coalitions are not a bad idea in themselves, though.

For one, they allow smaller parties an opportunity to have a say in running the municipality. Overall though, coalitions are necessary for the stability of a municipality and to ensure that the municipality runs the way it should – in the service of residents.

Okay, but how does it actually work?

Let’s take this step by step.

1. Remember that in any metro municipality there are both ward and PR (proportional representation) seats – you marked your X on two ballot papers, right?

3. The ward seats are determined according to the usual first-past-the-post system – where the candidate with with the highest number of votes is elected as ward councillor. They also sit on the municipal councils.

4. PR seats are determined in a slightly more complex (mathematical) manner. The ward councillors are directly elected by voters, and then a formula is used to calculate the number of seats for proportional representation. The PR allocation considers how many ward seats a party has already won to ensure that the final number of seats a party has does not exceed the percentage of the vote which they won overall.

5. The system as a whole allows for the correction of the weaknesses of the first-past-the-post system (which eliminates smaller parties), and therefore ensures that large parties do get power at the expense of small parties.

Is it only the party with the most votes that can form a coalition?

No, history tells us that in the 1999 general election, the ANC won the majority of votes in the Western Cape, but the DA was able to form a coalition government.

Have we ever had coalitions in a metro council before?

The City of Cape Town was run by a DA-led coalition from 2006- 2011. Jaap de Visser, director of Dullah Omar Institute, University of the Western Cape says that “while this coalition governed for five years, other coalitions in the province were less successful. Many collapsed or changed shape mid-term, with disruptive consequences.”

So who’s getting into bed with whom?

In Nelson Mandela Bay, the DA have 46.55% of the vote – they are widely expected to enter into a coalition with Bantu Holomisa’s UDM, but would need another party, or two, to take them over 50%.

In Tshwane, Jo’burg and Ekurhuleni, no party appears close to winning 50% or more of the vote. A coalition of some sort will have to be formed.

Mbuyiseni Ndlozi, national spokesperson of the EFF told The Daily Vox that the EFF would never be willing to work with the ANC, but in principle would not be opposed to coalition with opposition parties. However, since then Julius Malema has said the EFFÂ will not ignore any overtures made to them.

“We are willing to work with a coalition of opposition parties on the basis, of course, of specific annual targets that are about changing people’s daily lives – the lived experience of the people,” Ndlozi said.

“A coalition is always possible, it is the terms that are difficult. Happily, local government is about service delivery, it’s about clean water, it’s about roads that work, it’s about electricity supply – it’s not about the nationalisation of the mines,” said Selfe.

And what happens if no coalition is formed? This is when a minority government will have to be formed. The courts can force parties to form a government.

We defer to the wisdom of Professor de Vos here.

This means chaos. Because even if there’s consensus on the positions of mayor and speaker, the rest of council can still vote the mayor out on a motion of no confidence – just because they can.

Julius Malema said something about a run-off election if no coalition is formed?

Juju said the EFF didn’t mind a run off election to decide the fates for the hung metro councils. And while it may be an exciting prospect, Juju’s not quite right. There’s not going to be a run-off to decide the metros.

A high court could force parties to form a government if they can’t agree on key posts, and if that doesn’t work?

A council could be put under provincial administration.

We’d have to wait at least two years – two years of pandemonium in which service delivery will suffer – before there is a possibility of a run off.

Featured image of the ANC’s Gwede Mantashe, COPE’s Willie Madisha and a representative from the FF+ speaking at the IEC’s results centre, courtesy of Salaamedia.