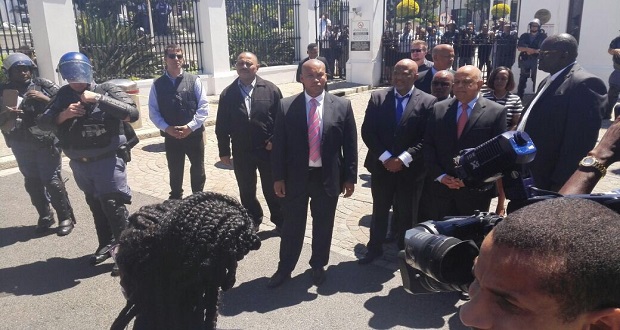 On Wednesday, Finance Minister Pravin Gordhan delivered the mid term budget speech in Parliament, amid protests outside the building. The speech was highly anticipated, given the current political situation with student protests across the country and Gordhan being charged with fraud.

The roads outside the gates of Parliament saw hundreds of protesters, including students from Western Cape universities. Upon arriving outside the parliamentary building, Gordhan met with the protesters and accepted a memorandum of demands from them.

Gordhan started his address by sending greetings to the house from the students protesting outside. He mentioned student protests briefly, saying that, â€œViolent protests signal unresolved social challenges. They present immense challenges to the leadership of our higher education institutions, municipalities and community organisations,â€ and make â€œhighly stressful demandsâ€ on security and police.

He then went on to observe all protocols and only got to the issue of higher education funding around halfway through the address. He said the ministry is especially mindful of the need to expand access to tertiary education. He acknowledged that this was not enough because the entire education system needs improvements, even though more students have gained increased access to education.

â€œPublic expenditure on post-school education and training has in fact grown considerably faster than other budget allocations in recent years, and this will continue. At the heart of the issue is that access has expanded faster than resources,â€ said Gordhan. He announced an increase in state funding towards higher education through the National Student Financial Aid Scheme (NSFAS), with no mention of funding institutions of higher learning directly.

â€œIn addition to the R16 billion added to higher education funding in the February budget, we therefore propose: a further R9 billion for the National Student Financial Aid Scheme over the period ahead, raising its funding by over 18% a year,â€ said Gordhan.

Several universities are yet to announce the fee increment for the 2017 academic year. Gordhanâ€™s mid term budget increased the capacity of NSFAS to fund more poor students and those from the missing middle.

â€œOver R8 billion to meet the costs of fee increases for students from households with incomes up to R600 000. We will work with the corporate sector and financial institutions to expand bursaries, loans and work opportunities for students. We appreciate that graduates who go on to earn higher incomes will in due course contribute a share of these gains to the next generation.â€ We wonder if he was alluding to a possible graduate tax there. Student leader at Wits University, Busisiwe Seabe says students were prepared for the response of the Finance Minister.

â€œWe reject it because we have made it very clear in the past, we don’t want to go forward according to fee increments, task teams and commissions. What we want is a free decolonised education now. Gordhan’s focus on the NSFAS system is misguided because it is not foolproof. It doesnâ€™t work for everyone. Ours is a call for free education, not for the few, but for all.â€

There was no talk about free education in Parliament. Gordhan did, however, acknowledge receiving proposals from academics and corporates, among others, saying that his department needed some time to evaluate those proposals.

The protesters who had gathered outside were dispersed by the police using stun grenades.

Speaking to eNCAâ€™s Jeremy Maggs after Gordhanâ€™s address, Higher Education Minister Blade Nzimande said, referring to the new budgetary allocations, â€œIt is certainly not enough but itâ€™s a huge step forward.â€ He said that higher education had received the largest increase out of all the government departments over the past two years, and he is awaiting the recommendations from the Fees Commission to bring a â€œmore lasting solutionâ€ to the higher education crisis.