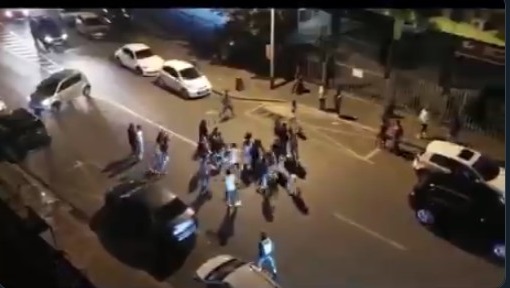 You may have seen the videos – a large group of people engaged in multiple fights on a street in Greenside, Johannesburg. It’s funny. Until it’s not.

It seemed like something out of a B-grade movie. People running at each other, a bat swinging while multiple fistfights compete with a good ol’ kick ‘em when they’re down. Virality was ensured.  Comedian Simmi Areff dubbed it the Greenside Massacre – his spoof of the brawl featured, teenagers, mothers, fathers, and even a bat.

And it’s all traced back to the enigma that is  E20MT who were confined to the interwebs until the night of the fight.

E20MT, Early 20s Muslim Twitter, the E20MT is a group of Twitter users mainly from the greater Johannesburg area,  might sound like a code name for some secret society where only a select few people are allowed in. It might actually just be a secret organisation. No one knows where they came from and what their purpose is other than sowing discontent and taking their beef from the TL to the streets.

Make no mistake, they’ve had very colorful disagreements in the past – they have very pronounced views on other people’s sexuality, for example. And they have certainly made many enemies but mostly for those who have stumbled on this section of Twitter, it’s just been annoying. But that hasn’t stopped them – E20MT is always ready to share their opinions with the rest of the world. They don’t care that those opinions might be damaging and well, not appropriate.

But it is beef between two popular users of E20MT that led to the Greenside brawl.

In the aftermath of the events, nine people were arrested with cases of common assault being opened. The nine were later released – and rumour has it that charges have been withdrawn.

But what actually happened is likely to have left even the police quite confused. News24 has reported that police spokesperson Captain Mavela Masondo said: “It seems that these people all knew one another because it is alleged that the fight initially started on Twitter.”

Two members of E20MT have been engaging in a Twar (what the young ones call a Twitter war), embarrassing details of people’s lives were exchanged and got heated. There was a back and forth for everyone to read about. (the tweets have since been deleted but Twitter always has receipts)

It all culminated in the Saturday night meeting of the two groups on the streets of Greenside. The two twarring members of E20MT bumped into each on Greenway street in Greenside. Details are sketchy but the pair, and their respective groups of friends, were locked into a physical fight – threats were made to f**** people up. Reinforcements – people’s parents –  were called. And thus the melee.

The Greenside Residents Association released a statement on the events that took place on Friday night, saying the behaviour is “part of a larger, ongoing pattern of problem behaviour on the business strip at night.” According to the association, due to changes in zoning and bylaws, there are many venues on the street which are selling alcohol without valid liquor licenses and venues selling alcohol to underage patrons.

It’s all very funny until someone actually gets hurt.