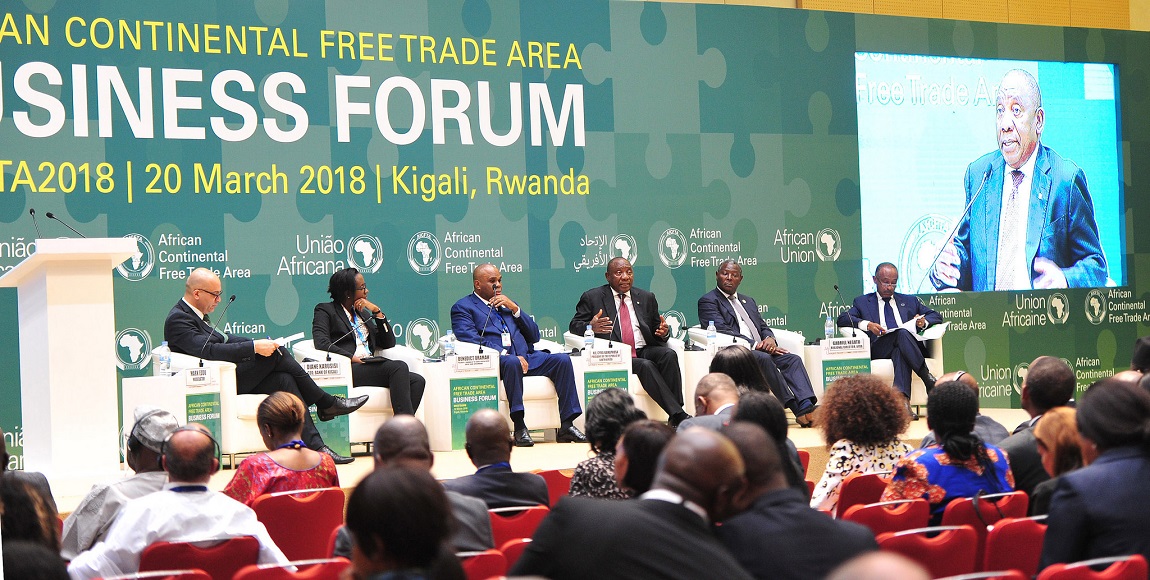 Earlier this month, African leaders gathered in Kigali, the capital of Rwanda, to sign an agreement that could have huge implications for commerce and trade on the African continent. This happened as part of a summit of the African Union. Around 44 member countries from the 55-member African Union signed accords for the setting up of a continental free-trade area. South Africa was not one of them.

The African Continental Free Trade Area agreement, or AfCFTA calls for a commitment from governments to remove tariffs on 90% of goods and phasing in the rest in the future. The agreement aims to allow for the free flow of goods and services between member states.

However, the agreements are just documents at the moment and will need to be ratified by at least 22 members before it can come into force. This could take about six months time according to the AU.

Rwanda president Paul Kagame who hosted the signing of the agreement, speaking before African leaders began signing the agreement said: “The promise of free trade and free movement is prosperity for all Africans, because we are prioritising the production of value-added goods and services that are Made in Africa. The advantages we gain by creating one African market will also benefit our trading partners around the world.”

The agreement marked a step towards to the continental body and its members achieving their Agenda 2063 goals which has full integration of the continent as its ultimate goal. Other agreements that form a part of these goals are about achieving a single market, single-air continental transport market, a single African passport and the promotion of agricultural development and food security.

According to eNCA, the agreement has the potential to create a unified market of $1.2 billion (R14.11 billion) and a GDP (Gross Domestic Product) of $25 trillion (R294 trillion).

South Africa was one of several countries that did not sign the agreement along with Nigeria, Botswana, Lesotho, Namibia, Zambia, Burundi, Eritrea, Benin, Sierra Leone and Guinea Bissau.

Nigeria, one of the largest economies on the African continent declined to sign the agreement completely, citing a fear of the agreement causing Nigeria to become a dumping ground.

President @MBuhari: We will not agree to anything that will undermine local manufacturers and entrepreneurs, or that may lead to #Nigeria becoming a dumping ground for finished goods. #AfCFTA

Nigeria president Muhammadu Buhari said the decision will have economic and security implications and therefore the agreement needs to be further consulted with before Nigeria will agree to sign it. However, his cabinet has adopted the agreement already.

President Cyril Ramaphosa didn’t sign the agreement even though he did welcome the historic adoption of the agreement as a new beginning for the continent.

In a statement released by the Presidency, Ramaphosa said that South Africa will become a signatory to the agreement once the legality of the agreement has been processed and ratified by the South African parliament, cabinet and the National Economic Development and Labour Council (Nedlac)

“So we are really going the cleanup process of ensuring that everybody is on board. As far as we are concerned as South Africa we are very much part of it. The agreement, therefore, is very much alive, it’s not dead in the water. We as South Africa want free trade in Africa because we are an important player in the African continent.” said Ramaphosa.

In Kigali, Ramaphosa did sign the Kigali Declaration for the Launch of the African Continental Free Trade Area during the plenary at the summit. This declaration is a sign of South Africa’s commitment to establishing the area.

“This is an opportunity that is going to yield great benefits for all countries on the continent as well as big business, small companies and micro-traders,” Ramaphosa said.

Jakkie Cilliers, a researcher from the Institute for Security Studies told The Daily Vox in an interview that: “Africa is South Africa’s most important export market. We have consistent trade surplus with the rest of Africa. For South Africa to grow its economy, Africa is absolutely critical.”

Cilliers says the biggest consideration which lies at the heart of South Africa’s interest in the agreement is expanding the country’s trade surplus and creating a bigger market for exporters.

On Monday, March 26, the minister of trade and industry Rob Davies said that South Africa is completely committed to signing the agreement and said the only reason it wasn’t signed was that there were processed that needed to be followed domestically before it could be signed.

“The AfCFTA is an economic imperative to address the challenge of small and fragmented markets. It is also being established at a time when the multilateral system is facing challenges,” Davies said.

Cilliers says the problem with the agreement is that details of the tariffs have not yet been negotiated which means Ramaphosa cannot sign it as there are many legal concerns raised from the constitution.

“Regional integration is a number priority for Ramaphosa administration.” however says Cilliers.

At the same Summit however, Ramaphosa did propose a single homogenous African currency which can be used to attract instructure and ensure better intra-African trade.

“We must rid ourselves of this colonial mentality that demands we rely on other people’s currency. Perhaps the day, the hour and the moment could have arrived for us to create a single African currency. Our focus should not be on our individual countries but the continent as a whole to unlock great opportunities and capabilities.” Ramaphosa said speaking on a panel about financing intra-trade on the continent.

However, David Luke from the African Trade Policy Centre told Al Jazeera he thinks it won’t take long to come into effect once ratified.

Cilliers on the other hand says while it is important that the agreement happens, the main problem is that a lot of detailed negotiations still need to happen amongst the countries and it is an extremely ambitious move.

“Hopefully what will happen is in a few years time, the negotiations on the tariff will be finalised. Only at that point will South Africa be able to sign on. It may be only half of African countries who agree to sign on and then other countries will sign on late. It needs to happen. It’s important to maintain the pressure but it’s going to take a lot of time to finalise this.” Cilliers added in closing.