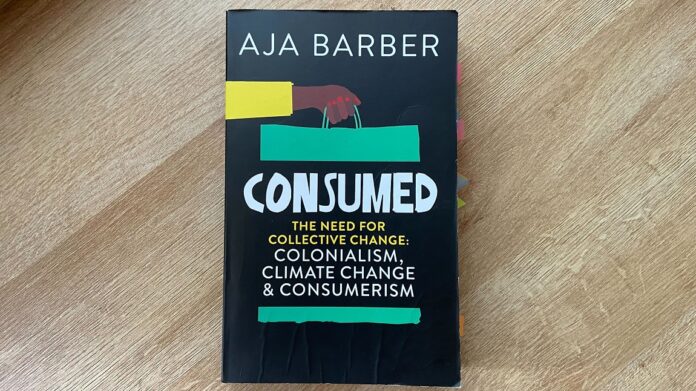 What does the fast fashion industry have to do with colonisation? Well, a lot actually. This is according to Aja Barber. In her book, Consumed: The need for collective change; colonialism, climate change & consumerism, she explains the links between the exploitative textile industry and its deep roots in colonialism.

Anyone who has even the slightest knowledge of world history will know that enslaved people were used to pick cotton in the United States of America. These enslaved people became one of America’s biggest financial assets and a major reason for America’s economic success. This forced labour system was carried out through violence and exploitation. In the 1800s, the slave trade was considered illegal and was shut down. However, this doesn’t mean the exploitation stopped and till this day vestiges of the cotton slave trade remain throughout the United States.

Barber makes the point that the sweatshops around the world show how this colonisation and exploitation continues till this day. It doesn’t only continue in different forms. It literally continues with the same features. In China, the Xinjiang region is one of the world’s top cotton-producing areas. Many Western brands use the cotton produced there. However, for awhile now, there have been allegations and reports that the region’s cotton is being produced by the Muslim minority Uighurs (also spelled as “Uyghur”), who are being persecuted and conscripted for forced labour. There have been reports that the Uighurs have been detained at camps from which allegations of torture, forced labour and sexual abuse have emerged.

In the book, Barber makes links between the fast fashion industry and the exploitation that takes place within the textile industry. It arises from the exploitation that people (mostly women) experience working in sweatshops in the “Global South”. This is something that most people are aware of. Most fast fashion brands and even some supposedly high-fashion brands rely on the cheap, exploitative labour to produce their products.

But it is more than that. Barber also points out the exploitation that takes place once the garments have been bought and discarded. In the United States and Europe, consumers buy tons of clothing which gets discarded everywhere. And where exactly do these items get discarded – well in landfills and markets across the “Global South”.

Due to the sheer amount of clothes that are bought and discarded every year, it is impossible for all of it to be sold at thrift shops and second-hand stores. Instead, the excess clothing is shipped to markets and landfills around the world. Barber explores two of these in great detail: the Citarum River in Indonesia and Kantamanto Market in Ghana. Both of these places are where the effects of the fast fashion industry and its exploitation are felt very keenly. These places are the dumping grounds for these excess clothes as well as the pollution and toxicity of the industry.

Therein lies the next problem: the exploitation is not just of people. Barber goes quite succinctly through the different levels of exploitation. It begins within the human element of racism, exploitation and appropriation. She then goes to tackle the issue of climate change. The fast fashion industry is one of the biggest emitters of greenhouse gases and generates a ton of gases. By going through the context of the industry as well as explaining the current situation, Barber brings it all together quite nicely.

She shows that it is corporates who continue to exploit people, resources and the earth just to increase their bottom line. While she doesn’t go into this as much – there is also the government responsibility. Many governments in the “Global South” have to clean up the messes caused by these corporations. However, for the most part, they allow this to happen because they are getting kickbacks as well.

But along with the corporations and governments, individual responsibility is also important. Barber explains how even Americans who are perhaps considered well-off consume large amounts of fast fashion. She says that is important for “people need to recognize who they are in the system, where they fall, what privileges they have, and what they can do”.

What makes the book a great read is that while it is heavy reading at times, it is about in her real-life experiences. She started her career in the fashion industry. She was a consumer. This lends the book an authenticity because she is not just speaking about abstract ideas. She always brings back what was explained in academic terms and grounds it in what she experienced or learned.

The point of the book is not to make people feel guilty or expect people to become ethical consumers (if there even is such a thing). Rather the book’s aim as explained by Barber is to get people thinking about what they consume and how they can remove themselves from the exploitation cycle. The onus has to be on corporations and governments. However, there is much power in many people coming together for collective change and that is what Barber wants people to understand.

Published by Brazen, the book is available online and at most bookstores.