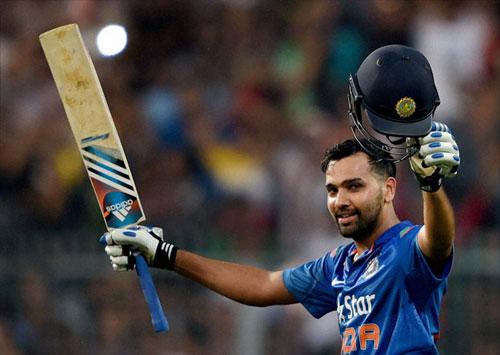 If Kim K broke any part of the internet with her bulging narcissism on a cover shoot, Â an Indian cricketer named Rohit Sharma totally killed it with a world beating, blistering barnacles of a performance against Sri Lanka on Thursday.

Sharma scored 264 of 177 balls to pulverise India to some ridiculous score against the islanders. Â In so doing, Sharma becomes the first person ever to score two double centuries in a one-day international (ODI) fixture and has in the process raised some questions over the future of ODI cricket.

Okay, it hasn’t. But it should.

Some model with a bad nose job decided to gift a nude photo-gig to Sharma for his performance (we are not linking, because we don’t care) And then pundits came stumbling out.

50 in 15 balls and all the other numbers from Rohit Sharma’s monster innings http://t.co/Ayz3xCyOJq via @espncricinfo â€” Sambit Bal (@sambitbal) November 13, 2014

Of course, with the World Cup coming up in a matter of months, it was only natural South Africa was going to come up in one form or another.

And why not? Both India and South Africa are early favourites for the coveted ODI World Cup 2015. And our boys need to stop with the panic attacks.

Either way. You know why you’re here: Watch the video below.