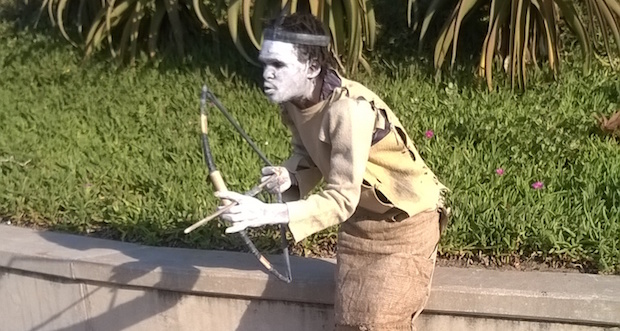 MELUSI MGADI, was a criminal offender from Kwamashu, came out of jail hoping to make a better life. To make an honest living he traded petty crime for mime. He told Zilungile Mnisi his story.

I started working as a mime artist back in 2010 after I being released from prison for good behaviour. I had been arrested for robbery and spent two years in prison. My father had passed away and I was the breadwinner of my family, with no employment. I started doing petty crime around the township. My mother wasn’t fond of the idea, but it was the only form of income we had. I realised that I was actually making good money from the crimes I committed, which led me to resort to robbery and hijacking.

It was only when I was caught that I had realised that I had made a big mess of my life. My family was left without anyone to provide for them when I was sent to prison. I realised that I owed it to them to come out a changed man. Prison was hell at first but I decided to make the best out of it by taking part in the recreational activities they offered. I knew there was nothing to lose. The positive side of being caught was a second chance.

One random, boring day I was whistling when a cellmate joined in and we made different sounds with our mouths. He was in a certain skills group and he offered to take me with him for their following session. We eventually went and that is when I learnt how to make these sounds.

When we had sessions, I would initially just whistle normally but now I use a small straw thatâ€™s shortened and sharpened on one side. I put it under my tongue so itâ€™s not visible and use it to make my sounds.

As the World Cup was approaching in South Africa, I thought of a plan to make money. I dressed like a San hunter, with my face painted white, and with a bow and arrow in hand and posed as a mime. When someone came close to me, I would move as though I was hunting, while making this sound.

This is how I support my family these days. I move from place to place performing as a mime. I go to rugby matches, soccer matches and festivals where I can draw attention, and I do this every day unless it is raining.

On some days I meet up with some of my ex-cellmates and we do a combination of sounds. Itâ€™s my dream that one day I would like to record us performing together.

Zilungile Mnisi is a journalism student at the Durban University of Technology. She loves meeting new people and being surrounded by happy faces. She enjoys reading thought-provoking novels and watching suspense movies.