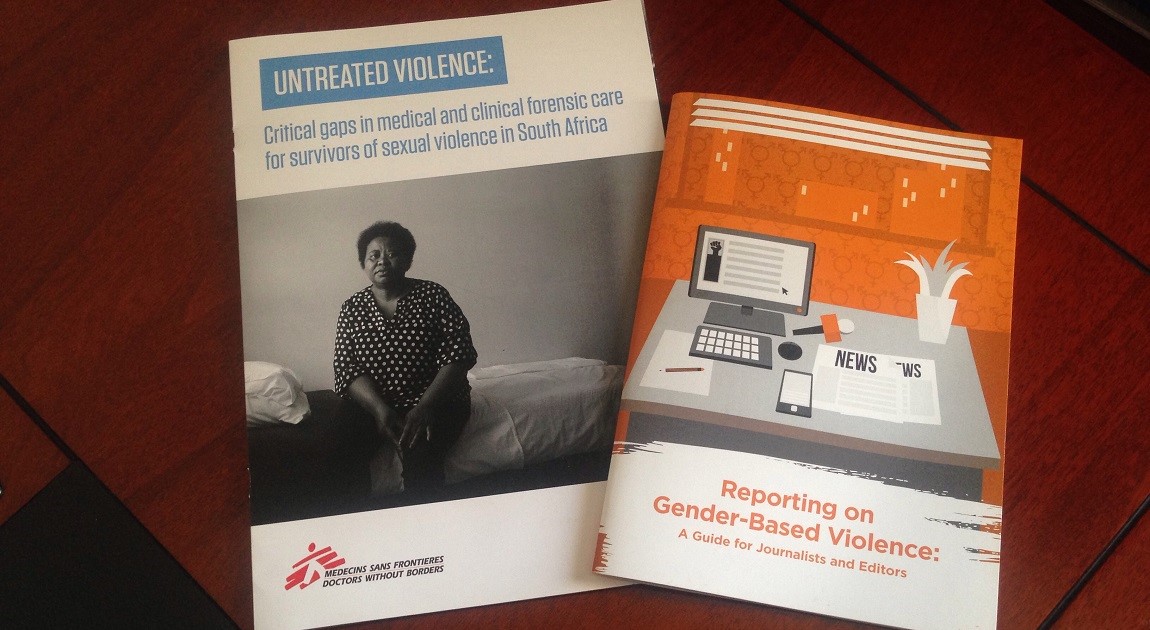 On Tuesday morning, Doctors Without Borders (MSF) officially launched a new report which looked at the critical gaps which exist in the provision of medical and clinical forensic care for survivors of sexual violence. Along with the launch of the report, NGO Sonke Gender Justice launched a new guide for journalists and editors for reporting on gender-based violence. The Daily Vox was there.

The morningâ€™s proceedings kicked off with the launch of the report by Dr Amir Shroufi, an MSF medical coordinator. Shroufi said the study, which is the first of its kind, was undertaken because of what they had previously found in Rustenburg on the Platinum Belt. The study found that rape was very prevalent in that area and yet many of the women did not go out to seek access to the medical services being provided. Shroufi said MSF wanted to find out the reasons why.

To read a summary of the report, click here.

However, in his presentation, Shroufi said that through the study MSF found that most of the services being provided by these designated health facilities were not adequate. They were mostly being carried out by doctors, which often meant that survivors would have to wait long periods of time before being seen. Often most of these services were in urban areas far away from the majority of the survivors and difficult to reach.

â€œIt is a picture of missed opportunity.â€ Shroufi said, indicating that although there are many opportunities available to deal with the consequences of sexual violence on victims and survivors, those opportunities are often missed because of inadequate services and untrained staff.

Poppy Makgobatlou, who is the woman featured on the cover of the report, is also a survivor of sexual violence. She suffered more than 27 years of mental and physical abuse at the hands of her husband.

â€œIf an abused woman hears my story, I want them to know that I, Poppy Makgobatlou, used to hide my problems, but it kills you from inside to do that. You must speak out,â€ she said.

Nikita Ramkissoon, a journalist and founder of Survivor Voices, an online platform for survivors to share their stories anonymously, presented on the mental health effects of sexual violence on survivors. She pointed out that the trauma of sexual violence is lifelong and survivors need comprehensive care. However, victim-blaming, rape culture and unqualified medical professionals means that survivors do not get the care they so desperately need.

Cecilia Lamola, one of the nurses who participated in this MSF study described the challenges that face forensic nurses working in South Africa. Forensic nurses typically perform more specialised duties as compared to a general nurse. They help to care and evaluate victims of assault, abuse and sexual crimes.

However, according to Lamola, there are only 61 trained forensic nurses in South Africa and there is only one higher education institution that provides the training – the University of the Free State. She further says the SA Nursing Council does not recognise forensic nurses as a specialised medical professional which makes this another challenge to providing the comprehensive care that is needed by sexual violence survivors.

Lamola says that we need to clearly define sexual violence and rape and to teach children and others that so they can properly report what has happened to them.

At the MSF launch, Sonke Gender Justice also launched a guide for the media on how to report on gender-based violence. The comprehensive guide, which was created in collaboration with Health-e news, lists the various doâ€™s and donâ€™ts for the media in approaching sexual violence survivors. Marike Keller from Sonke Gender Justice said she would encourage all journalists to keep a copy on their desks to consult from when reporting on sexual violence.

Journalist and author Redi Tlhabi, who chaired the discussion, commended the great work being done by all the organisations and people who were represented at the launch. However, she questioned why we need politicians when they seem to be failing in their jobs. Tlhabi called on South Africans to make sure politicians account of systemic failure for sexual violence survivors and for politicians in power and those who want to be in power to prioritise gender-based violence.

*Disclaimer: Nikita Ramkissoon is a former managing editor of The Daily Vox