Home Voices “How long must I suffer so I can get a house?”
WhatsApp
Facebook
Twitter
Email
Print 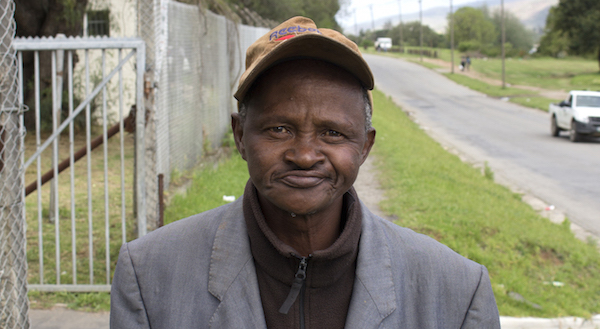 Vusumzi Michael Mdyogolo (55) is a lifelong Grahamstown resident and struggle veteran. He has been trying to get a government house for the last decade. Now, thanks to the social workers at his local municipal clinic, he is closer than ever, he explains to STUART THEMBISILE LEWIS.

Are you a journalist? Good. I want you to tell my story.

Iâ€™ve just come from the clinic now. I was with the social worker there, they’re helping me to get my house. They wrote this letter, here that says my disability is permanent.

I was working as a postman and I was in an accident with a motorbike. I fell on both my wrists and broke them both. You can see here how they are bent. Now my doctors have said I cannot work. So they have given me this letter.

I used to workÂ -Â I like to work! I must now live off the disability grant. Â I am still trying to find piece work because I want to keep myself young.

My youngest brother, Patrick, died in the struggle. He was shot down by the apartheid police. And if you can see here, I still have a scar from where I wasÂ beaten by the cops when he was being shot. This is from the back of a rifle.

In 1976 I was fighting; I was a youth. They wanted to teach us only in AfrikaansÂ – even mathematics in Afrikaans! We said no. So we went to fight them.

Nelson Mandela was in jail. We fought for him. We went there to the gunsÂ andÂ to the bullets, with stones.

Iâ€™m 55 years old now. I applied for a house here in Grahamstown. But I couldnâ€™t find a house in Vukani location, or in Extension 9, or even now in Extension 10.

There are some young boys, I applied before them, but because they are ANC, theyâ€™ve got houses there. Everybody is popping in thereÂ but they wonâ€™t give me a house because I am with the DA. They tell me that because of this I will only get a house in Phase 50. I donâ€™t know when that is going to happen because now they are only starting to build Phase 2.

Iâ€™ve got three sons and they say they are over ageÂ and thatÂ they can apply for their own houses. But my daughter has a little baby. So I want a house, so that if I pass away, she has a place to live. Those people in charge of housing allocation think that those houses belong to supporters ofÂ the ANC. No, they are mistaken. That is a government thing; everybody has a right to join any organisation they want and to have a shelter.

How long must I suffer so I can get a house?

The people here in the clinic are very good. They are helping us a lot and they are taking very good care of us. Iâ€™ve got this letter here that says my disability is permanent. This will help me to go get my house. The social workers have helped me so much.

– As told to Stuart Thembisile Lewis Stuart Thembisile Lewis is currently in his third year of a Bachelor of Journalism degree at Rhodes University. Essentially a leftie, pinko socialist, his Twitter bio is a collection of all things he does when heâ€™s not stuffing around on the internet. Follow himÂ on Twitter.