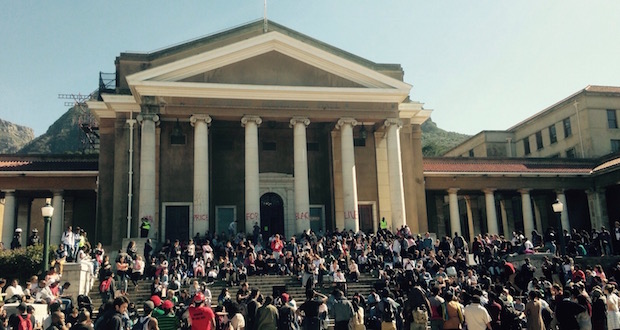 When the Bill was initially submitted in 2015, it sparked a robust conversation on state intervention to achieve social justice outcomes – and whether this â€œtop-downâ€ intervention harmfully compromised institutional autonomy in higher education.

So what does the Amendment actually say?

The Amendment covers a range of issues, but most notably includes the following:

The appeal of legislating transformation

If the past two years have highlighted anything, itâ€™s that all is not well within South Africaâ€™s higher education and training sector. From inaccessibility, inequality, and the prioritisation of knowledge that centres the Western world, to issues of gender, racial, and sexual discrimination – a lot has been raised since the dawning of the Fallist movement in 2015.

Vito Laterza, a research fellow at the University of Cape Townâ€™s Centre for African Studies, wrote: â€œTransformation, or rather its slow pace, remains a major unresolved issue that casts a long shadow over efforts to increase access to higher education and overcome the legacy of apartheid.â€

He says that historically white universities â€“ the most powerful players in the sector â€“ have not successfully transformed and academic staff in these institutions are not representative of overall society.

In line with this, Professor Adam Habib, Vice Chancellor of the University of Witwatersrand, told The Daily Vox that while some institutions were making progress in transformation, some university executives needed to get moving. â€œThere are institutions where white students in certain campuses constitute over 70%. Thatâ€™s not acceptable – and they need to be held publicly accountable,â€ said Habib.

The move towards having the state step in to legislate and enforce oversights in line with transformation is thus obviously appealing to many. So now that government is finally taking its first steps to materialise this commitment to change, surely we should be celebrating?

Perhaps, but itâ€™s slightly more complex than that.

Government intervention in universities does not sit well with everyone – and thereâ€™s potentially good reason for this.

In 2015, Belinda Bozzoli of the Democratic Alliance wroteÂ that the problem with the initial Higher Education Amendment Bill wasnâ€™t necessarily to do with transformation, â€œbut with the breadth and vagueness of the proposed intervention and the envisaged direct invasion by the Minister into university decision-makingâ€.

In considering the current Act, Habib echoed her concerns, believing that aspects were still too broad, which potentially left room for the abuse of power. Of greatest concern was the ministerâ€™s ability to recall entire councils and replace them with an administrator at his own discretion.

â€œYouâ€™ve seen the abuse of the public broadcaster and how it was brought to its knees because too much power was granted, in a sense, to a ministerial initiative. So we must always have checks and balances on power – even on vice chancellors. No single individual, person or stakeholder must have unfettered power. I think thatâ€™s dangerous,â€ said Habib.

Historically speaking, the intervention of the state into higher learning also has somewhat of a bitter legacy – both in other African countries, and closer to home.

Gustav Swart, journalism lecturer at the Cape Peninsula University of Technology, told The Daily Vox that academic autonomy allows institutions of higher education the freedom to critically nurture learning that advances society – values that were directly trampled on during apartheid. â€œIn apartheid South Africa, the National Party resented that role and repeatedly tried to exert control over who was teaching what to whom,â€ said Swart.

While thereâ€™s obviously a marked difference between the current calls for justice and the apartheid policies that facilitated the initial injustice, thereâ€™s a certain degree of healthy scepticism involved in wanting keep power to account. Especially in the context, as Habib highlighted, where abuse of power is rife within government.

Thus, while experiences of state intervention into higher education are by no means homogenous, the concerns expressed over the state having too much influence in higher education is, at the very least, a feasible concern.

Autonomy and intervention at odds

In certain circumstances university autonomy and government intervention are not necessarily at odds with one another, but itâ€™s not overtly clear that the state is intervening in a way thatâ€™s compromising higher education. Part of the reason for this is from the time the initial Bill was submitted, the ministry has been repeatedly consulting with various stakeholders in higher education and training – specifically vice chancellors and university student representative councils. This makes the process involved less a case of top-down intervention, and more democratic in nature.

â€œItâ€™s worth bearing in mind that they have engaged [vice chancellors and student representative councils]. There was negotiation and a significant amount of consultation over the period of six to eight months last year and the year before. So there has been a very significant move in the present draft. I think we must acknowledge that,â€ said Habib.

Habib highlighted that the Act was revised a number of times, and now includes provisions that curb the ministerâ€™s power to directly intervene without prior warning and the consultation with university executives and council. This also allows time for universities to take action should they feel that the ministerâ€™s intervention is an abuse of authority.

Another thing to keep in mind is that itâ€™s disingenuous to claim that institutional and academic freedom are only compromised by state intervention – while not mentioning the competing factor of capital. The market, as a number of academics remind us, Â is not an impartial or neutral force in higher education.

If this is the case, considerations of protecting university autonomy means remaining vigilant to both the effects of state, market, as well as other social forces that come to regress the integrity of higher education.

This means jealously protecting university autonomy and freedom, while at the same time ensuring that that freedom is accessible – and being utilised in a manner that is accountable to the interests, and in service of, the public.